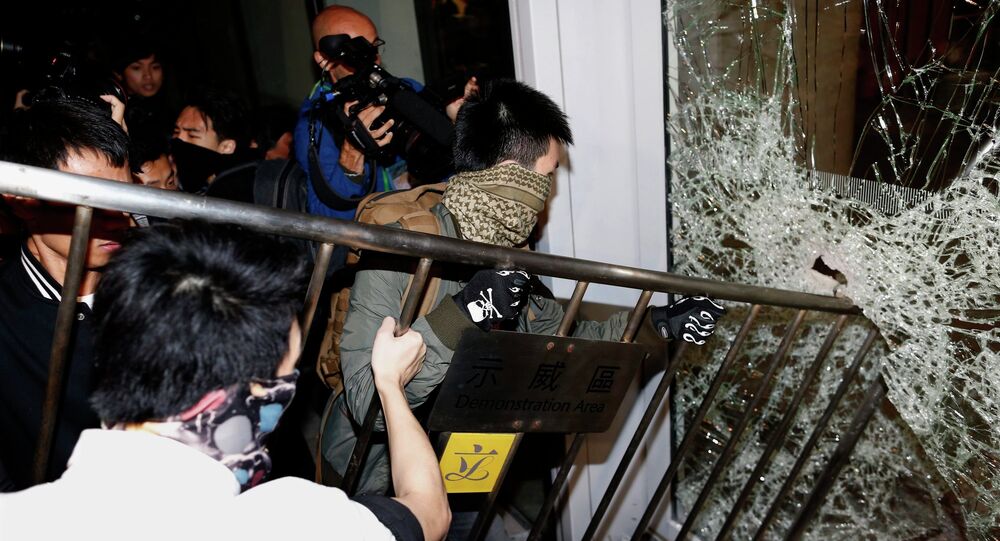 The US would love to see regime change in China, but Washington understands that the Chinese government remains firmly in control, political analyst Eric Draitser told Sputnik; therefore, the US is throwing its NGOs into the fray to do the "dirty work."

Although Moscow and Beijing have in the past tolerated the activity of US-based NGOs in Russia and China, they have since come to view the organizations as provocative and destructive, and have at long last decided to bring them to the end, by passing legislation aimed at preserving the countries' sovereignty and independence.

Unsurprisingly, their moves have met with harsh criticism from the West.

"The main reason why the West is so upset about Russia and China's moves to curb the influence of foreign NGOs is because these NGOs represent a critical element of the West's projection of soft power in these countries, and around the world.  The NGOs act as a de facto arm of western intelligence and governments, helping to further the objectives of Washington and its allies," US geopolitical analyst and Stopimperialism.com editor Eric Draitser told Sputnik.

© AFP 2020 / FILIPPO MONTEFORTE
Paul Craig Roberts: 'US Wants to Coerce Russia Into Submission'
"This may take the form of civil society penetration, human rights propaganda, or infiltration into fields such as academia, political activism, or popular media.  As such, these NGOs form a very potent weapon in the arsenal of Western countries, whose goal is to influence the hearts and minds of the targeted countries.  Russia and China, being the two primary geopolitical obstacles to US and Western hegemony, are of course the primary targets," the analyst pointed out.

Curiously enough, these US government-funded entities are usually called "non-governmental" organizations, which at first glance have nothing to do with politics.

"NGOs provide Washington with political and diplomatic cover, and what they might call "plausible deniability."  Essentially, the US is able to throw up its hands and act as if it is uninvolved in the activities of the NGOs.  In other words, it allows the US to engage in dirty tricks while keeping its hands clean," Draitser elaborated.

© AFP 2020 / Philippe Lopez
Washington’s Fifth Columns Inside Russia and China
In one of his latest articles, "China's NGO Law: Countering Western Soft Power and Subversion," Draitser nailed Washington for its consistent attempts to destabilize China via a network of various NGOs. He pointed out that the infamous "Umbrella Revolution" movement in Hong Kong was closely connected with "key organs of US soft power," such as the National Democratic Institute (NDI) and the National Endowment for Democracy (NED).

Furthermore, America's NGOs have long been adding fuel to the fire of ethnic tensions in Xinjiang, spreading distorted information about the situation in the region and consistently demonizing Beijing. The same National Endowment for Democracy (NED) has been sponsoring a number of Uighur interest groups in western China for years, including the World Uighur Congress, Uighur American Association, International Uighur Human rights and Democracy Foundation, and the International Uighur PEN Club, among others.

So, does it mean that Washington is planning to unleash a Maidan-style revolt in China?

"The US would love to see regime change in China, but they are not so naive as to believe that such a scenario is likely in the near or medium term.  Washington understands perfectly that, despite the doomsday prognostication of the corporate media, the Chinese government and Communist Party are firmly in control, that the political and financial systems are not nearly volatile and weak enough for a Maidan style strategy," Draitser told Sputnik.

"However, the US would like to lay the groundwork for just such a destabilization in the future.  That's why Washington has worked so hard to recruit younger generations into the NGO complex in order to indoctrinate the next generation of leaders into a US-centric, West-centric worldview that will allow the West a far better chance at regime change down the road," the geopolitical analyst emphasized.

© REUTERS / Xinhua, Li Gang
Bad News for US: China, Russia Bolstering Military Cooperation in Asia
Despite the fact that China has long served as "the factory" for US consumer goods and its role as one of Washington's largest trading partners, the Chinese "threat" to US hegemony in the region outweighs the decades of mutually beneficial partnership.

Thus far, US corporations have rushed to make "lucrative manufacturing deals with other countries in the region (Vietnam, Malaysia, Thailand, etc.) where wages are even lower than in China, and which could serve as potential substitutes for China, were that deemed in the interests of the powers that be," Draitser highlighted.

However, "Beijing utterly rejects the notion that its government should take a back seat to Western interests," the analyst stressed.

American geo-strategists are sweating bullets about further Sino-Russian rapprochement, and consider it a tremendous hindrance to US hegemony in the Asia Pacific region and beyond.

"Washington is now apparently launching its plan to break up the Russian-Chinese alliance before it can solidify," Dr. Paul Craig Roberts, former Assistant Secretary of the Treasury for Economic Policy warned in his latest interview with Sputnik, noting that China's economy is still closely integrated with America's.

Is Washington able to lure Beijing away from Moscow in the near future?

"The US would love to lure China away from Russia, but the simple fact is that they cannot. US influence over China is not nearly what it once was, and under Xi Jinping, China has become ever more assertive regarding issues of sovereignty and strategy," Eric Draitser told Sputnik.

At the same time, Washington is cutting its own throat by alienating China through aggressive policy in the South China Sea and the militarization of the region.

"Remember that, aside from the NGOs, the US has antagonized China in the South China Sea, and with the Diaoyu/Senkaku Islands issue.  In both regions, the US has essentially tried to goad China into a direct confrontation, which to their credit, the authorities in Beijing have resisted," the geopolitical analyst stressed.

Meanwhile Russia and China are growing closer, he noted, referring to the country's bilateral infrastructure, energy and security projects, and of course the famous Beijing-led New Silk Road initiative.

"To suggest that the US could team with China against Russia (as it did decades ago) is, in my view, simply anachronistic," Eric Draitser concluded.

Western Economy Needs to Present Russia as 'Enemy' to Survive