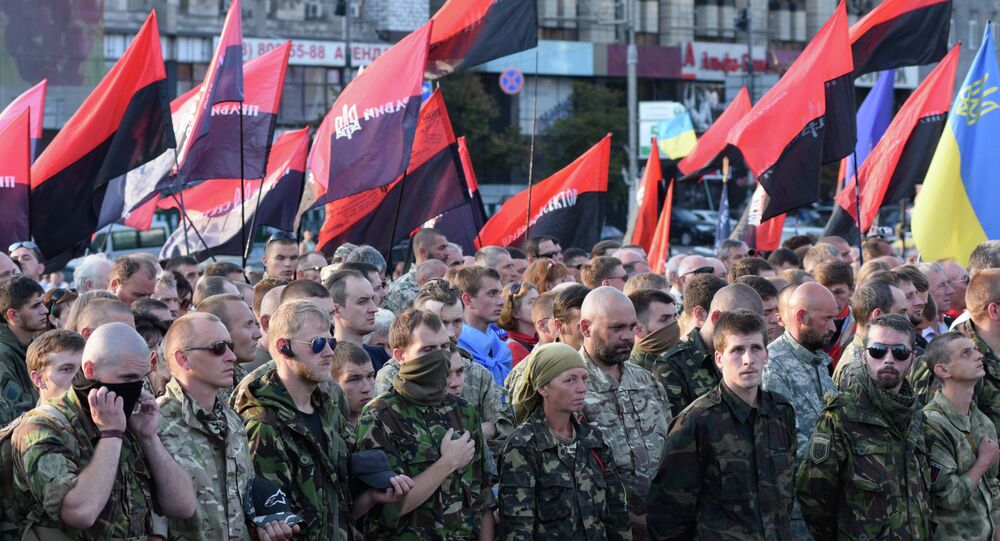 "That's what we bought into when Washington decided to launch a regime change operation in that bedraggled corner of southeastern Europe. Your [Americans'] money is also going to prop up the country's war-stricken economy — albeit not before corrupt government officials rake their cut off the top," Justin Raimondo underscored.

© AP Photo / Evgeniy Maloletka
Disenchanted Ukrainian Army 'Expressing Admiration for Right Sector'
While Western media sources were almost obsessed by the idea of an "imminent" and "massive" Russian intervention in to Ukraine, no one can imagine that Kiev could soon face an invasion, however, the threat is not a Russian one.

"It's the Kiev regime's own foot-soldiers returning from the front and turning on their masters," Raimondo remarked, adding that the war is evidently "going badly" for the government of chocolate mogul Petro Poroshenko.

"Unable to crack the rebels' resolve, the "revolutionaries" who once gathered in the Maiden have begun to turn on each other. Poroshenko, fearful of the rising power of the far-right militias who make up the backbone of his makeshift army, has ordered their dissolution — and the rightists are resisting," the author elaborated.

Now the Right Sector is calling upon Kiev to launch a national referendum ("without gathering the required signatures, and under their sponsorship") on such issues as a formal declaration of war against Russia, a total blockade of the break-away eastern Ukrainian provinces, the legalization of their militias and last, but not the least — an impeachment of the Poroshenko government, including the mogul himself.

Besides the Right Sector, Ukraine is currently flooded with ultranationalist and openly neo-Nazi militias, such as the Aidar Battalion or the Azov Brigade.

American journalist and writer Joseph Epstein exposed that although Washington has officially claimed it would not provide Ukrainian neo-Nazis with training, "the highly problematic truth is that the US currently has no real way of ensuring that members of neo-Nazi groups like the Azov Battalion are not being trained by US forces."

© Sputnik / Stringer
Right Sector Gives No Rest to Ukrainian Government – German Newspaper
"The Ukrainian Ministry of Interior brings what one US official calls a "mishmash" of troops, consisting of volunteers, members of militia battalions and official army to be trained," Epstein highlighted.

While American senior military officials assert that Azov members are screened out, "no one seems to know precisely how that's done," the journalist remarked.

And here we go again, notes Raimondo, referring to the disturbing history of arming, training and funding of Taliban Islamists by Washington during the Cold War. "And we all know where that road led," he warned.

"Once again, in our endless search for foreign monsters to destroy, we're creating yet more foreign monsters who will provide the next excuse for future crusades. It's a perpetual motion machine of foreign policy madness — and the War Party likes it that way," Raimondo emphasized.