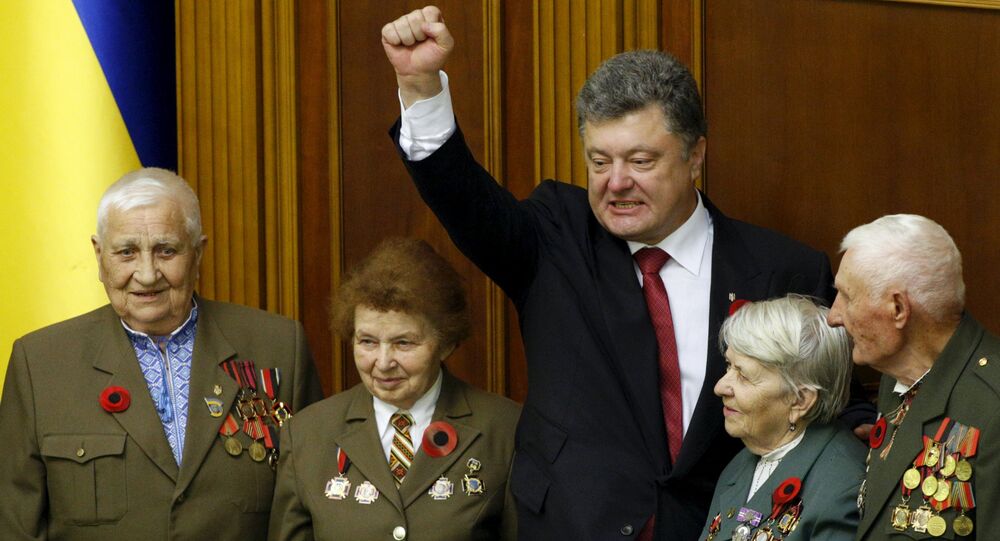 On Friday, Ukrainian President Petro Poroshenko officially signed a series of laws outlawing communism, while simultaneously recognizing the veterans of the Nazi collaborationist Ukrainian Insurgent Army as fighters for the independence of Ukraine.

© Photo : homopoliticus
Ukrainian Propaganda Equates Heroes of WWII With Army Fighting in Donbass
The controversial set of bills, which were approved by Ukraine's parliament last month, consists of four parts, including a formal condemnation of the Soviet communist regime, a ban on Soviet and communist symbols, the declassification of Soviet secret police archives, and recognition of the Ukrainian Insurgent Army and other wartime ultranationalist organizations as freedom fighters. In a slight to the country's six million Red Army veterans, the documents also include a law rejecting the term "Great Patriotic War," used among Soviet successor states to refer to the 1941-1945 conflict between the Third Reich and the Soviet Union, and replacing it with the "Second World War."

Laws Either Contradictory or Highly Cynical

Formally, the law condemning communism equates the ideology and its symbols with Nazism. In this way, it pays lip service to initiatives launched several years earlier by lawmakers in several other Eastern European countries. However, given its place among a package of bills which also glorify Nazi collaborationist 'fighters for independence', the attempt to outlaw communist ideology through a declaration of its moral equivalency with Nazism seems contradictory at best, and outright cynical at worst.

© Sputnik / Pyotr Zadorozhnyi
Poland Forgets Victory Over Nazism for Sake of Friendship With Ukraine - Polish Newspaper
The Organization of Ukrainian Nationalists (OUN) and the Ukrainian Insurgent Army, Western Ukrainian territorial militia which actively collaborated with Nazi Germany even before the onset of the Second World War, were known for their genocidal policies in areas under their control during the war. UPA has been documented as having been involved in the massacre of up to 120,000 ethnic Poles in Volyn and Galicia, as well as the murder of tens of thousands of Jews, Russians, and 'Russophile' Ukrainians.

Given post-Maidan Kiev's attempts to rewrite the history of OUN-UPA as an Allied force in the fight against Nazi Germany, Poroshenko's signing of the bill glorifying the group has also provided authorities with the legal mandate to make challenging such a claim punishable by law. This was confirmed by Poroshenko's press service, which noted in its commentary on the passage of the decommunization laws that the president also intends to introduce a bill to Ukraine's parliament aimed at further "toughening the standards of liability" for challenging the memorialization of Ukrainian fighters for independence.

"The Allied Armies and UPA shoulder to shoulder. The new history of Ukraine." Pictured: 'Number of Ukrainians in the Armies of the Allies' [Circled: Ukrainian Insurgent Army – 100,000]

© Photo : Official site of Ukrainian president Petro Poroshenko
Worlds Apart: Victory Day as Celebrated by Kiev and Donbass
Recently commenting on the law glorifying OUN-UPA in an article published by the Jerusalem Post, journalist Josh Cohen has stated that "in addition to the moral problem of forbidding the criticism of Holocaust perpetrators, the law hinders Ukraine's European ambitions –and validates Russian President Vladimir Putin's claims that the country is overrun by neo-Nazis." Pointing out that the ideological descendants of the OUN-UPA played a crucial role in the Maidan coup, Cohen also notes that now, unfortunately, many of the country's top posts, ministries, and institutions are overrun by radical ultranationalists.

© Sputnik / Chekachkov Igor
Kiev Thinking Twice About 'Banning Communism'
Amid the debate which followed the Ukrainian parliament's decision to 'ban communism' last month, commentators, Ukrainian and Russian alike, have pointed out the odd bitterness and fanaticism with which the Rada has chosen to struggle against the 'dead' ideology, which has been a relic of history in Europe for nearly a quarter of a century. The Ukrainian Communist Party itself has not played a major political role in the country since last year; before then it had long served as the country's third parliamentary party. First hounded and publically beaten by nationalist militants, communists later faced lustration from administrative posts, and were finally kicked out of parliament by presidential decree ahead of snap parliamentary elections in October. The party has since faced dozens of attempts to have its activity banned outright, and is not believed to pose any significant political threat to Kiev.

The idea promoted by some among the Kiev political elite, that the ban on communism is related more to a struggle against a 'Russian ideology', also falls flat on its face, given that Russia too rejected the communist ideology, and because Ukrainian communists played a key role in the construction and advancement of the Soviet system. Ethnic Ukrainians Nikita Khrushchev and Leonid Brezhnev lead the country for over twenty years, after all.

The Ukrainian parliament's anti-communist witch hunt has led to fears that the ban would target not only public symbols of Soviet power, but also less visible but no less important symbols, including veterans' medals. Moreover, critics have commented on the expensive bureaucratic nightmare that the proposal is set to unleash. With literally thousands of city, town, village and street names slated for being renamed, and tens of thousands of communist symbols earmarked to be removed from buildings, monuments, gates and facades, the campaign is projected to cost the country's cash-strapped budget billions of hryvnia. Moreover, once streets are renamed, an estimated two million people, businesses and public organizations will have to line up in government offices to have their documents changed.

© Sputnik / Loskutov
Hijacking History: Ukraine Erasing USSR's Contribution to Victory in WWII
Envisioning the massive bureaucratic headache to result from the law, several MPs from the country's governing coalition began reinterpreting the laws' basic provisions just days after parliament passed them, stating that they carry an 'advisory character'. With the decommunization package having been signed by the president, only time will tell whether Ukraine will 'put its money where its mouth is', and carry through with the expensive, pointless campaign.

Last month, political scientist Vadim Karacev told Ukrainian news hub Vesti that the laws on decommunization will serve only to further weaken the Maidan authorities' political influence in the south and east of the country. Josh Cohen argues that that the laws will definitely serve to split "eastern and western Ukrainians," who "already possess widely diverging views on recent political events such as the collapse of the Soviet Union and the Maidan revolution." As for the law glorifying OUN-UPA fighters, Cohen argues that the law will only serve to "exacerbate these regional differences," with "Eastern Ukrainians…viewing these groups as Nazi collaborators to be feared and condemned rather than celebrated."