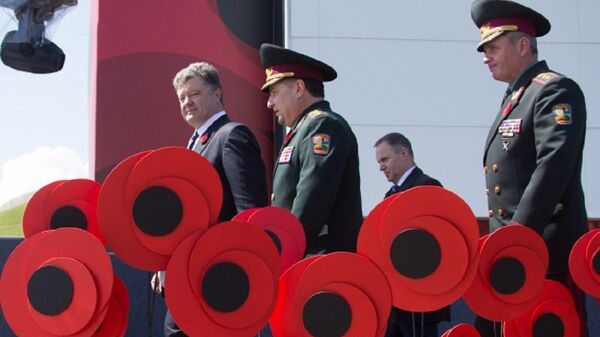 Ilya Tsukanov
All materialsWrite to the author
In contrast to Moscow, Minsk, and a slew of other cities throughout the former Soviet Union, including Ukraine's own wayward Donetsk and Lugansk republics, Kiev marked Victory Day in a low-key and characteristically 'anti-Soviet' way, featuring black marshals' uniforms, a sterile background and the red and black poppy in place of the Soviet star. 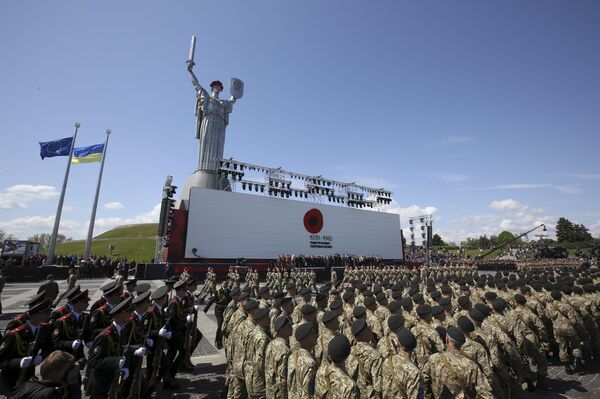 Servicemen marching before the Soviet-era Mother Motherland monument in Kiev, with a Ukrainian and European Union flag fluttering in the background; the monument's head was fitted with a poppy wreath and gold and blue ribbons; May 9, 2015.
© REUTERS / Mikhail Palinchak 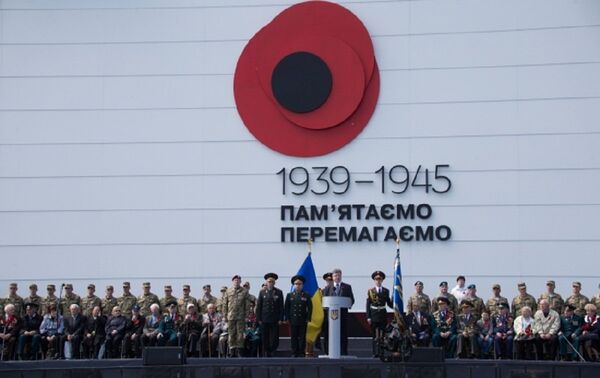 New symbolism displayed on May 9, 2015 in Kiev. Red and black poppy, dark grey uniforms for commanders, and most importantly, commemoration of the years 1939-1945 (the Second World War as a whole), instead of 1941-1945 (the Great Patriotic War).
© Photo : Official site of Ukrainian president Petro Poroshenko

The president's speech attempted, rather woefully, to reinterpret the meaning of the color red used in the celebration: "May 9 will always be a red date in the Ukrainian calendar, just as these red poppies that symbolize the remembrance of the fallen." 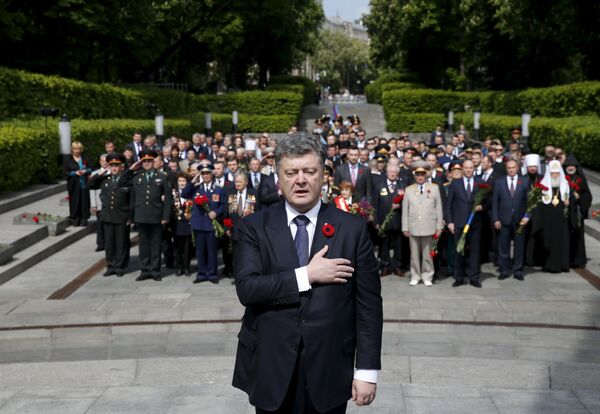 Explaining his government's decision to change the symbology used in the celebration almost beyond recognition, Poroshenko noted that "we will never celebrate this day under the Russian scenario again, because it provides for the cold-blooded use of Victory Day for an apology to expansionist policy…We will celebrate the Victory Day in our own frame of reference," the president noted.

This new frame of reference readily includes emphasizing the special role played by the Ukrainian Insurgent Army, known for its collaboration with Nazi Germany during the Second World War, and for committing horrible war crimes against Poles, Russians and anti-fascist Ukrainians, in victory:

"Along with the leading role played by the Red Army and Soviet partisan units, a second front was established in Ukraine against the fascist invaders by the Ukrainian Insurgent Army. Ahead of their time, they saw Ukrainian as independent government."

The president emphasized his government's attempts to reconcile the antipodes of the Red Army and their UPA opponents. "Do you know who united them? It was their grandsons and great-grandsons -Ukrainian warriors that secured our state and defended it from Russian aggression," Poroshenko asserted. While six million Ukrainians served in the Red Army during the Great Patriotic War, UPA's ranks are believed to have numbered roughly 100,000 militia.

"The Allied Armies and UPA shoulder to shoulder. The new history of Ukraine."

Linking the great victory in the Second World War with Ukraine's bloody civil war in the east, Poroshenko argued that the present war is a "symbol of the continuity of generations." In his words, "the soldiers who stand here today, through their faithful service and devotion to Ukraine, will increase the glory of their elders and ancestors." 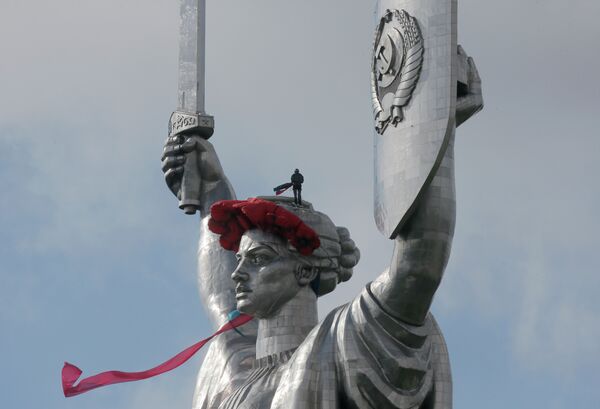 Kiev's Motherland Monument in Kiev. Feeling sheepish about removing the 102-meter tall Soviet-era monument overlooking the capital, authorities decided to decorate it with a wreath of poppies and a ribbon instead.
© AP Photo / Efrem Lukatsky

In a stark contrast to Kiev, the resource-starved but spirited populations of the Donetsk and Lugansk People's Republics were out in full force, Soviet symbology and all.

Donetsk's parade featured 1,500 personnel, including its most famous volunteer fighters, along with 30 pieces of heavy equipment, including tanks, armored cars and artillery, decorated with the Ribbon of St. George and the red star.

"The 'Immortal Regiment' in Lugansk during the May 9 Victory Parade"