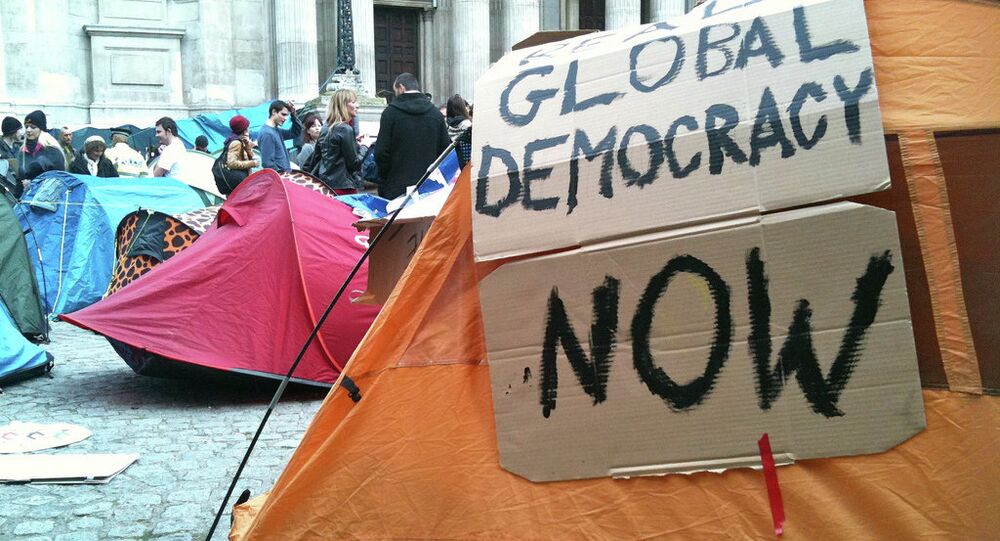 The United States has spent a lot of time, money and energy on promoting global democracy, however, it has not yet accomplished its ambitious task, American academic Walter Russell Mead underscored.

Washington and Brussels have spent a lot of time, money and energy to "promote democracy" across the globe since 2001; alas, it seems that they have finally come up against a brick wall.

"Never in human history have so many states spent as much money and energy trying to "promote democracy" in foreign lands as the United States and the European Union have spent since 2001…This all adds up to a deeply inspiring spectacle, or it would if democracy promotion were having much impact on the ground. But the grim reality is that democracy is in retreat in much of the world," American academic Walter Russell Mead emphasized.

© Flickr / ale
US Spending More on 'Promoting Democracy' in Russia
The academic argued that despite the fact that Washington obviously failed to accomplish its ambitious task, the United States should move on, since "the promotion of values has always been an important part of American foreign policy."

However, the American scholar admitted that in many cases "democracy" had led to corruption, severe ethnic tensions, and systemic crisis.

"Paradoxically, the more democratic a political system is, the more corrupt it can become." And "it does not go away just because someone in Washington or Brussels publishes a white paper saying that corruption is a bad thing," the scholar noted.

© Flickr / Yasser Abusen
Obama's Middle Eastern Policy Drives Arab Rulers Up the Wall
"The rise of democracy and the rise of ethnic tension, hatred, and violence are very closely connected historically; this is still sometimes the case today," the academic revealed, adding that citizens "do not need to become perfectly enlightened" to establish a "reasonably well-functioning democratic state."

Although the author is demonstrating an optimistic approach toward the idea of America's moralistic value-promotion mission, the question remains whether all the efforts and sacrifices made by the United States and paid for by American tax payers were truly justified.

A series of regime changes and "humanitarian" operations carried out by Washington in Afghanistan, Iraq, Libya, Syria and most recently, Ukraine, have resulted in economic and political collapse and turmoil with no end in sight.

© AP Photo / Sergei Grits
Ukrainian Crisis Could Blow up Into Major European War – Spanish Media
Remarkably, US President Barack Obama has already admitted that the rise of the notorious Islamic State could be directly linked to the US invasion of Iraq under the rule of then President George W. Bush.

"ISIL is a direct outgrowth of Al-Qaeda in Iraq that grew out of our invasion. Which is an example of unintended consequences. Which is why we should generally aim before we shoot," Barack Obama confessed in an interview to a US mainstream media outlet.

However, the White House's next steps have demonstrated clearly that Washington continued "shooting" without "aiming."

After the power transition "brokered" by Washington in Ukraine, the country has plunged into chaos. Practically all the "democratic" initiatives voiced by the new Ukrainian authorities remained ink on paper, while the West turned a blind eye to the rise of neo-Nazis, atrocities against Russian-speaking minorities and crackdown on political opponents of Kiev.

So far, the question remains open whether the United States should continue its highly expensive "democracy promotion" mission if it can provide no guarantees that it will work.