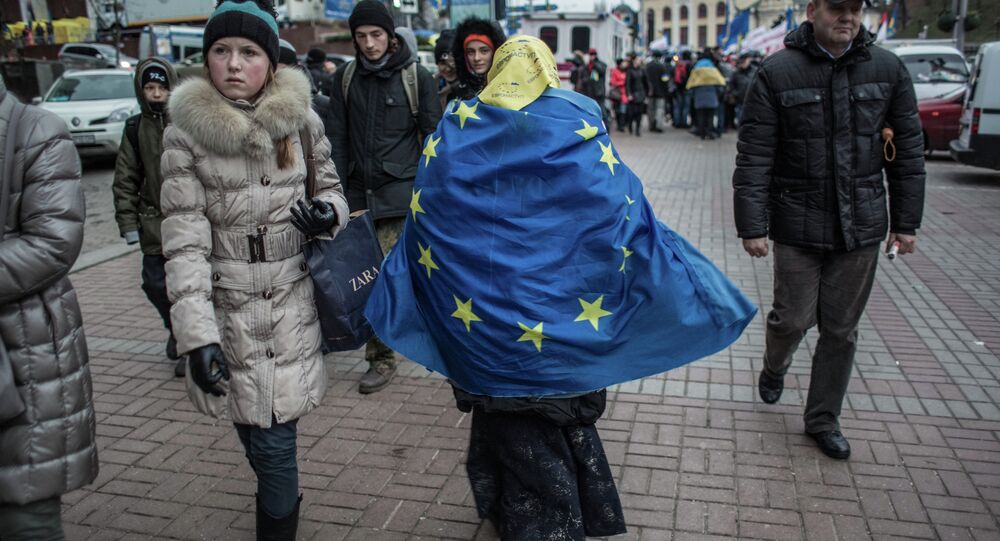 EU Tries to Regain Moscow's Trust Despite US Displeasure

It seems that Europe is inclined to re-establish political and economic relations with Russia, deteriorated over the Ukrainian turmoil, and to revive the idea of the free trade zone "from Lisbon to Vladivostok," George N. Tzogopoulos noted.

Brussels and Berlin are softening their stance on Russia little by little, while Washington continues to blame Moscow for the ongoing crisis in Ukraine, noted George N. Tzogopoulos, a research fellow at the Hellenic Foundation for European and Foreign Policy (ELIAMEP) and lecturer at the European Institute.

"Europe is slowly attempting to regain the confidence of Russia and engage the country in a promising political game of both obligations and benefits. Germany could be considered the architect of this European strategy. Its business lobby has pushed its political elites to reconsider the obsolete approach of Russia's economic isolation despite the US pressure," George N. Tzogopoulos emphasized.

© AP Photo / Alexander Zemlianichenko
EU Falls Victim to Its Own Geopolitical Adventurism in Ukraine
The expert pointed out that in January 2015, German Chancellor Angela Merkel and Economy Minister Sigmar Gabriel raised the issue of a joint trade area with Russia, reviving an idea of the free trade zone "from Lisbon to Vladivostok" – a concept first voiced by Vladimir Putin in 2010.

Remarkably, Angela Merkel once again called public attention to this matter a few days ago. During her speech at an economic forum in Stralsund, the German Chancellor elaborated that the EU plan to create a free trade zone with Ukraine and Moldova is not directed against Moscow, the expert remarked.

"Neighborhood Commissioner Johannes Hahn has also joined the debate by encouraging Ukraine to continue its trade with Russia irrespective of the future implementation of its DCFTA [Deep and Comprehensive Free Trade Agreement] with Europe. As he recently said during a public discussion in Brussels, Kiev can still benefit by its preferential relations with members of the Eurasian Economic Union (EEU)," George N. Tzogopoulos stressed.

© AP Photo / Markus Schreiber
Merkel Says Free Trade Zone Between Germany, Russia Possible
The EU views the Minsk ceasefire agreement as a window of opportunity for both political and economic stabilization in the region. While Washington is urging Brussels to impose tougher sanctions against Moscow, the EU realizes that such a move would again boomerang on Europe.

At the same time, Berlin desperately needs an "impressive foreign policy success" in order to restore its reputation, tarnished by its controversial austerity policy in the Eurozone, the expert noted.