"We are satisfied with the end of this marathon. We have passed an important benchmark," Ryabkov, who is Russia's top nuclear negotiator at Iran nuclear talks, told reporters in Lausanne. 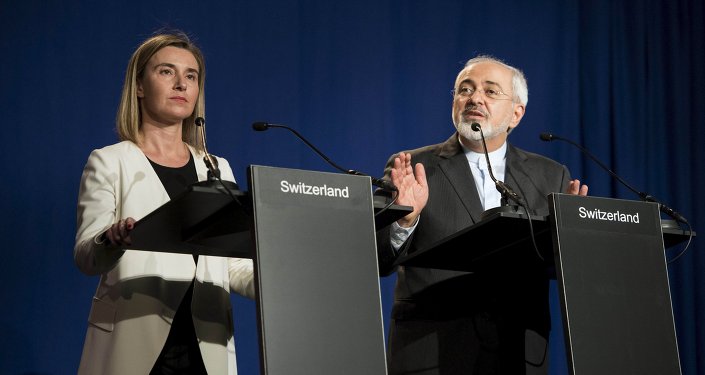 © REUTERS / Brendan Smialowski/Pool
All Nuclear-Related Sanctions Against Iran to Be Lifted - Mogherini
"The round ended with finding solutions to the key parameters of the solution," Ryabkov said, adding that the sides still had disagreements on a few issues.

"I wouldn't say that we have reached 100% understanding on all aspects, without exception, of a final agreement. Some disputed issues still remain," Ryabkov said, adding, however, that "the volume of reached understanding is far greater than what remains to be agreed upon."

“The next step would be editing the document. The future agreement is a technical issue, rather complicated. The place and venue are yet to be determined,” Ryabkov said.

Russian Deputy Foreign Minister also said that Moscow is ready to continue supplies of fresh nuclear fuel for Iran, as well as to take back spent fuel from the country's reactors built with Russia’s participation.

© AP Photo / Brendan Smialowski
The Iran Nuclear Deal: Highlights, High Hopes, and Haters
“The Russian Federation and state nuclear energy corporation Rosatom are ready to supply fresh fuel and take spent, irradiated fuel back to Russia from all the reactors that were built and can be constructed in Iran,” Ryabkov said.

As for the spent fuel from reactors built without Russia’s participation, “this issue is extremely complicated and we are not ready to consider it,” the Russian diplomat added.

An agreement between Moscow and Tehran on the civil use of nuclear energy and a subsequent agreement on the construction of a nuclear power plant in Iran dates back to August 1992. Bushehr, Iran's first Russian-built nuclear power plant, was launched at full capacity in the summer of 2014.

The project for Bushehr-2 was presented by Russian nuclear experts in Tehran in September, 2014. In November, Iran signed a number of deals with Russia for the construction of two more nuclear reactors and an option for an additional six.

Looking forward, Ryabkov said the arms embargo imposed on Iran should be lifted after a final comprehensive deal is reached with Tehran regarding its nuclear activities.

"We think that the arms embargo against Iran should be lifted immediately after agreements are reached," Ryabkov told journalists.

© AP Photo / Brendan Smialowski
Nuclear Deal With Iran to Have Positive Impact on Middle East - Russia
The deputy foreign minister stressed that Russia has repeatedly brought up the issue at the UN Security Council and will continue to insist on the lifting of the embargo.

The UN Security Council, the United States and the European Union, as well as several other countries, have implemented several rounds of sanctions against Iran over the country's disputed nuclear activities, which the West believes are part of a plan to develop nuclear weapons. Tehran has repeatedly said that its uranium enrichment program is being developed exclusively for peaceful purposes.

Iran and the P5+1 group of international mediators reached a preliminary framework agreement on the nuclear issue on Thursday in the Swiss city of Lausanne. This latest round of talks was originally scheduled to end on Tuesday, March 31, which was the deadline set for a political framework deal. However, the negotiations in Lausanne were extended. The deadline for a comprehensive agreement has been set for July 1, 2015.

The P5+1 countries, comprising Russia, the United States, France, China, the United Kingdom and Germany, have been trying to seal an agreement ensuring the peaceful nature of Iran's nuclear activities since November 2013.