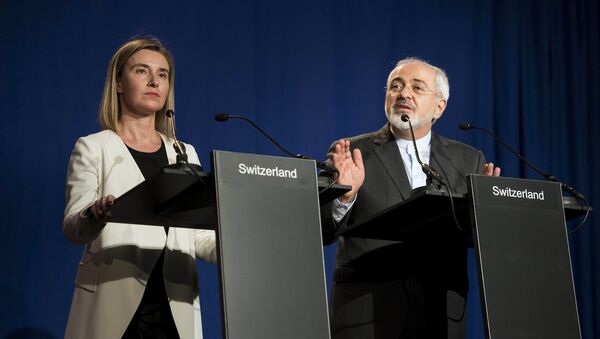 © REUTERS / Brendan Smialowski/Pool
Subscribe
The long-awaited solution on Tehran's nuclear program was reached on Thursday at the latest round of talks in the Swiss city of Lausanne.

EU foreign policy chief Federica Mogherini said all US and EU nuclear-related sanctions against Tehran would be lifted.

The UN Security Council and a number of countries have imposed several rounds of sanctions on Iran, accusing the country of developing nuclear weapons under a guise of a civilian program, a claim Tehran has repeatedly denied.

At the same time, Iranian Foreign Minister Mohammad Javad Zarif said the United States and the European Union would stop implementing anti-Iranian sanctions, according to the final agreement to be reached by the July 1 deadline.

He said that Tehran would continue enrichment under peaceful nuclear program and within the framework of the agreement. However, there still are differences between Iran and the United States, Zarif noted.

"None of our facilities will be closed," Zarif told reporters following joint press conference in Lausanne.

FM #Steinmeier: It is+was our aim to reach reliable pol. agreement that prevents #Iran from gaining access to #NuclearWeapons 2/5 #IranTalks

Solutions Found at P5+1, Iran Nuclear Talks in Lausanne - FM Zarif
Mogherini said that Iran's stockpile would be limited. According to the reached agreement, only an enrichment facility in Natanz will continue operating. She added that Fordow nuclear facility would be converted into a nuclear physics site.

Solutions agreed at Iran nuclear talks will create a basis for a future deal between the P5+1 and Tehran, the EU top diplomat said.

The Iranian top diplomat said that resolutions of the United Nations Security Council would be terminated under the future nuclear deal adding that mechanisms would be created to verify that the agreement would be implemented.

Agreements on the Islamic Republic's nuclear issue would be endorsed by a new UN Security Council resolution.

Final Ministerial Plenary of these #IranTalks. Now going to meet the press with @JZarif. Good news

Iranian President Hassan Rouhani said via Twitter that solutions on key parameters of the Islamic Republic's nuclear issue had been reached.

The P5+1 group comprising Russia, the United States, France, China, the United Kingdom and Germany have been trying to reach a deal with Iran that would ensure the peaceful nature of Tehran's nuclear energy program since 2013.