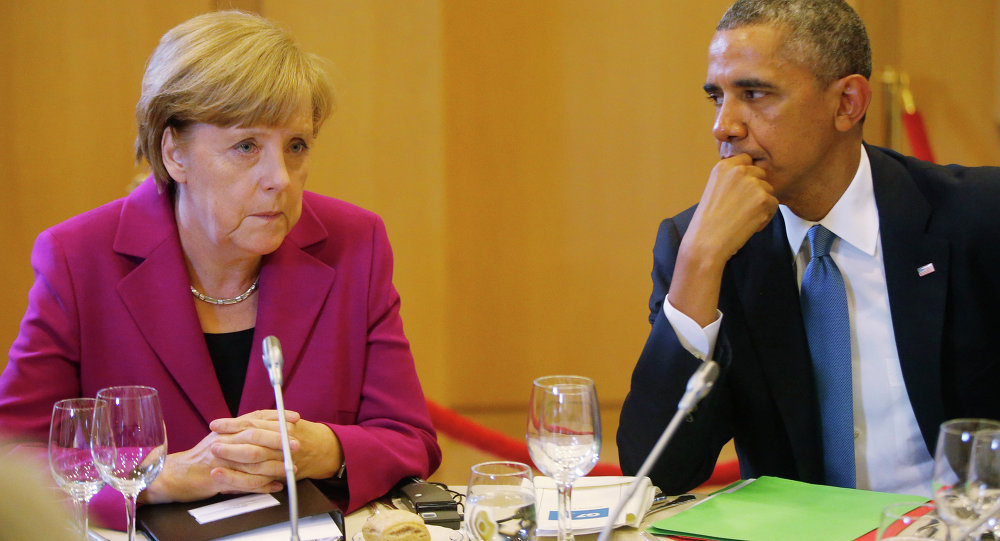 US President Barack Obama decided not to send offensive weapons to Kiev after talks with German Chancellor Angela Merkel in early February, according to Germany's envoy to the US.

© AP Photo / Jacquelyn Martin
US Lawmakers Urge Obama to Provide Ukraine With Lethal Arms
Merkel, an avid supporter of a diplomatic solution to the Ukrainian conflict, tried to convince Washington that supplying lethal aid to Kiev would only aggravate the crisis in the country. German leaders have repeatedly said that a diplomatic solution is the only option that will work for Ukraine.

During the meeting in the White House, Obama agreed "to give some space for those diplomatic, political efforts that were underway" to secure a peaceful resolution of the Ukrainian conflict, Germany's ambassador to the US Peter Wittig told the Associated Press.

© AFP 2019 / PETRAS MALUKAS
US Hawks Undermine Berlin's Peace Efforts in Ukraine to Destabilize Russia - German Newspaper
"The two leaders exchanged views on that issue and there was unity by them not to impose, or not to go forward with, the delivery of lethal defensive weapons at this time," he added. Obama is under considerable pressure from US hardliners to send Kiev lethal weapons. So far he has been reluctant to do that.

Three days after the talks between Merkel and Obama in February, the leaders of Germany, France, Russia and Ukraine worked out a set of measures in the Belarusian capital of Minsk to alleviate the conflict in Ukraine.

Under the Minsk deal, Kiev and independence supporters in eastern Ukraine agreed to implement a ceasefire and pull back heavy weaponry. Although the ceasefire was breached a few times, it appears to be largely holding.