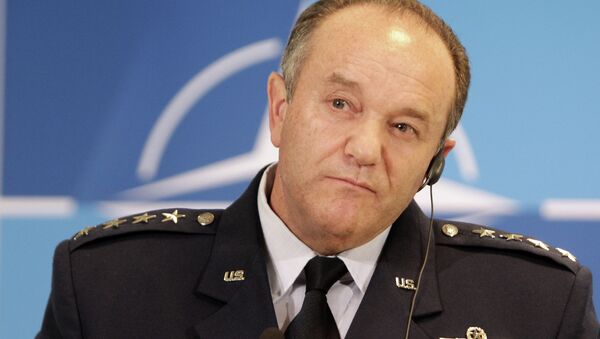 © AFP 2023 / PETRAS MALUKAS
Subscribe
International
India
Africa
The civil war in Ukraine has exposed a fundamental rift between the US and Europe in terms of vision and goals for the region, as powerful US hardliners are working tirelessly to escalate the crisis with a broader agenda in mind, Der Spiegel news magazine said.

US hawks, including the likes of Victoria Nuland, the head of European affairs at the US State Department, and General Philip Breedlove, NATO's Supreme Allied Commander Europe, are seeking to destabilize Russia and undermine its influence. To that end they are trying to heighten tensions between the West and Russia over Ukraine, undermining peace efforts led by Germany and France. Although the US president currently supports the European initiative, he has "done little to quiet those who would seek to increase tensions with Russia and deliver weapons to Ukraine," Der Spiegel said.

EU, US Aren't Seeing Eye to Eye on Ukraine Crisis - Steinmeier
A relatively calm situation in Ukraine's eastern regions following the latest Minsk agreements does not play into the hands of US hawks. So instead of being cautiously optimistic that the ceasefire holds, General Breedlove warned in late February that the situation "is getting worse every day."

These and many other remarks made by the top NATO European commander with regard to Russia's alleged involvement in the Ukrainian crisis "stunned" and "alarmed" German leaders, since these claims are often not supported by the data provided by Germany's foreign intelligence agency BND, the news magazine said.

General Breedlove "repeatedly made inexact, contradictory or even flat-out inaccurate statements," Der Spiegel pointed out. However, he refused to revise them telling the media outlet that "it is normal that not everyone agrees with the assessments that I provide."

Berlin is concerned that Breedlove's stance "could harm the West's credibility," Der Spiegel said. Consequently, German Foreign Minister Frank-Walter Steinmeier is determined to discuss the issue with his American counterpart John Kerry to rule out any possible misinterpretations in the future. However, on Saturday, Steinmeier downplayed the US-German differences highlighted in Der Spiegel's article by emphasizing that German officials "have no interest in any dispute emerging from this."

US Should Stay Away From Ukraine, Let EU Solve Crisis - French Scholar
Indeed, German authorities "have always considered a common position vis-a-vis Russia as a necessary prerequisite for success in peace efforts. For the time being, that common front is still holding, but the dispute [between Germany and the US] is a fundamental one — and hinges on the question of whether diplomacy can be successful without the threat of military action," Der Spiegel said.

Moreover, while Germany and France seek to stabilize situation in Ukraine, US hardliners seem to have a different goal in mind. "For them, the dream outcome would be regime change in Moscow," the magazine said.