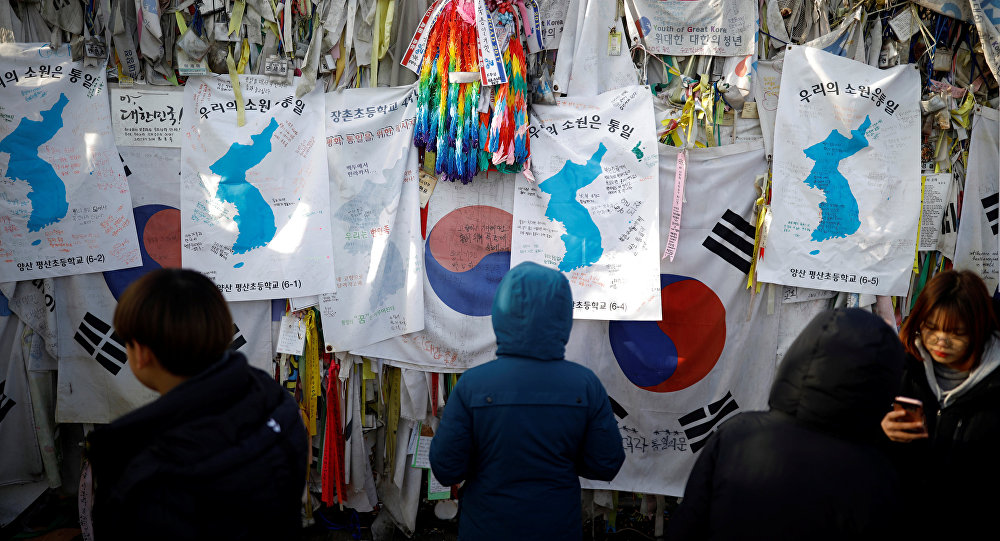 TOKYO (Sputnik) - Japan voiced a protest to South Korea against the backdrop of putting a disputed island group in the Sea of Japan, called Dokdo by the Koreans and Takeshima by the Japanese, on the joint flag of the two Koreas at the upcoming Olympics, Japanese Chief Cabinet Secretary Yoshihide Suga said Monday.

"The flag is unacceptable and very regrettable in light of Japan's position on the Takeshima islets’ sovereignty. In response to this case, we have delivered Japan's stance and expressed our strong protest to the South Korean side through diplomatic channels," Suga said.

In January, Seoul and Pyongyang agreed that the two countries’ national teams would march together under a "unification flag" at the Pyeongchang Olympics opening ceremony, following a thaw between two Asian nations prior to the world's championship.

The islands, which have also been known as the Liancourt rocks, have long been a roadblock in the diplomatic relations between the two states. South Korea claims they were annexed by Japan during its colonization of the Korean Peninsula in the 20th century.

© Sputnik / Iliya Pitalev/ Host photo agency
South Korean President to Meet With DPRK Ceremonial Head of State - Reports
The islands have been administered by South Korea since 1954. Japan, however, has been disputing Seoul’s sovereignty over the territory, with both sides stating that they have long-standing historical ties to the island group.

The Unification Flag is an unofficial flag used to represent athletes from South Korea and North Korea as one team in sporting events. The flag was used for the first time when the two countries competed as a joint team in the 1991 World Table Tennis Championships in Japan and the World Youth Football Championship in Portugal. It was also used by the national teams of the two Koreas during the opening ceremonies of 2000, 2004 and 2006 Olympics.