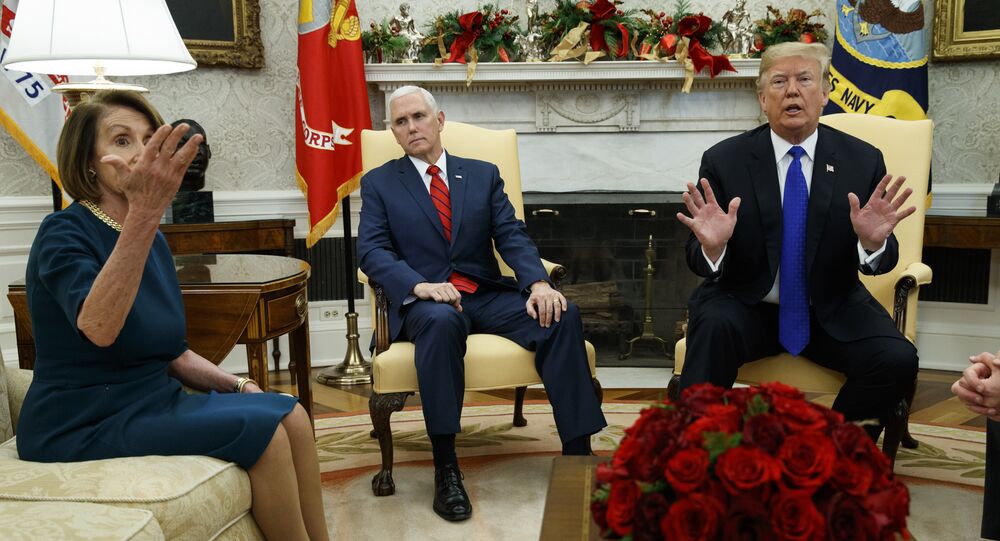 House Speaker Nancy Pelosi declined on Wednesday US President Donald Trump's invitation to issue his State of the Union address in the House Chambers, which was initially scheduled to take place on January 29.

Pelosi's response came just a few short hours after the White House issued a letter on Wednesday, indicating that Trump was still planning to proceed with SOTU address at the Capitol despite her request last week to postpone the speech until after the government reopens. The White House letter to the House Sergeant-at-Arms had been requesting to schedule a dry run for Trump's address since a previous walk-through had been postponed.

"I am writing to inform you that the House of Representatives will not consider a concurrent resolution authorizing the President's State of the Union address in the House Chambers until the government has opened," Pelosi wrote, noting that she is open to setting a "mutually agreeable date" once the government has reopened.

Trump has responded to Pelosi's Wednesday letter, saying that he's "not surprised" and that "it's really a shame what's happening with the Democrats."

​"They've become radicalized," Trump said. "They don't want to see crime stop, which we can very easily do on the southern border. And it really is a shame what's happening with the Democrats… this will go on for awhile."

White House reporters are indicating that Trump has acknowledged that the address has been canceled, and that it was bumped because Pelosi "doesn't want to hear the truth."

The latest development comes after Pelosi initially urged Trump last week to reconsider his address in light of the current partial government shutdown, suggesting that he either reschedule or submit his address to Congress in writing.

In a tit-for-tat- move, last week, Trump canceled a trip Pelosi was planning to take to Afghanistan, Brussels and Egypt. Trump indicated that rather than traveling overseas, it would be better for the Democrat to stay in Washington to hash out a spending bill that would include funding for his promised wall along the US-Mexico border.

It's presently unclear where or if the address will be held. The government shutdown is currently on day 33.

The State of the Union Is...Petty, Trump Cancels Pelosi's Trip