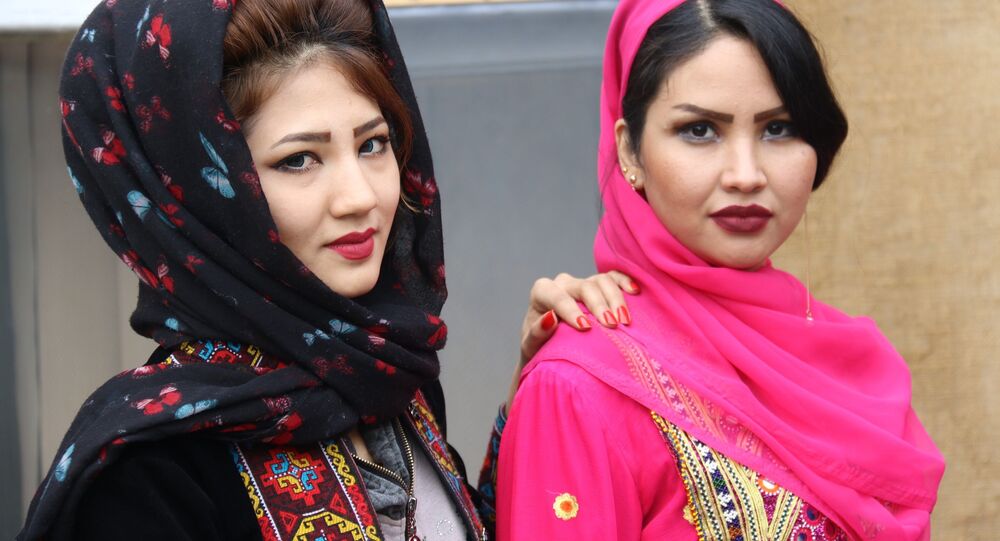 In Kabul, a number of Afghan youths are engaged in the modelling business, thus demonstrating to the public the best items of their traditional folk dress. The modelling agency, indigenously called Haqiqi, is the first fashion house in Afghan history.

Since every tribe or ethnic group in Afghanistan can boast its own clothes, donned in line with a range of traditions, the agency aims to ultimately revive common interest in conventional outfits, according to its head Ajmal Haqiqi.

There are 25 people, both boys and girls, employed at the fashion agency. One of them, 18-year-old Yalda Haidari, has told Sputnik what led her to a career in the fashion industry:

"I take an avid interest in fashion and makeup. I have always enjoyed being in a company of friends who dressed well. That’s the reason why I am now employed at the Haqiqi agency." According to the girl, her family strictly opposed to her work in fashion business:

"Afghanistan is a traditional country. Women are faced up with a slew of problems as they strive to become models. There were also quite a few challenges from my family’s side – some hints, warnings and even swear words. I am doing my best to counter all the complications."

The model went on to say that due to a low cultural level in the country, there are many women who blast the work of models. According to the girl, women should on the contrary demonstrate solidarity and support one another.

Lida Rezaei, a third-year economics student at university, has also detailed to Sputnik how she ultimately wound up in the modelling business.

"I’ve been part of the Haqiqi team for the past 4 months. My only goal boils down to showing my compatriots and the world around the indigenous culture of Afghanistan, which can among other things boast tremendously beautiful clothes."

She remarked that women find it challenging to find even an ordinary job, to say nothing of becoming a model. The girl tries to think positively and pay no attention to some ill-wishers' rhetoric:

"Despite the obvious challenges, I never think about unpleasant things and I ignore what other people say."

Ajmal Haqiqi, for his part, has shared with Sputnik the reasons why he started a modelling agency:

"Every nation’s culture is in essence its face. A country with no culture remains unknown to the world around. The modelling business is just a pretext for me to show the world different clothes and the wealth of Afghanistan’s cultural features."

He said that he had been working in this sphere for 10 years already, and he had faced two major problems along the way – a lack of security and tight finances.

Haqiqi went on to say that they would love to go global:

"We have already brought our catwalk shows to different Afghan provinces and cities. We would love to travel with our collections to other countries around the globe. Recently, we’ve been to India, and a great many models partook in the show. By doing so we demonstrated that Afghanistan is not solely about bombings and the absence of security:  the country is proud to have youth who are ready to stand on guard of their country’s culture," Haqiqi concluded.

He also touched upon the history of the modelling business in Afghanistan:

"Under Muhammad Daud Khan (Afghan statesman, the country’s president in 1977-1978 – Sputnik’s note) catwalk shows took place in one of Kabul’s hotels. Many think that this business existed even at that time. However, we’ve researched the subject and found that they are wrong. That was a culture week, dedicated to Muhammad Daud Khan; and it saw international guests invited to take part in the event. Separately, I found out that before I personally stepped into the modelling business ten years ago, nobody had been in it before."