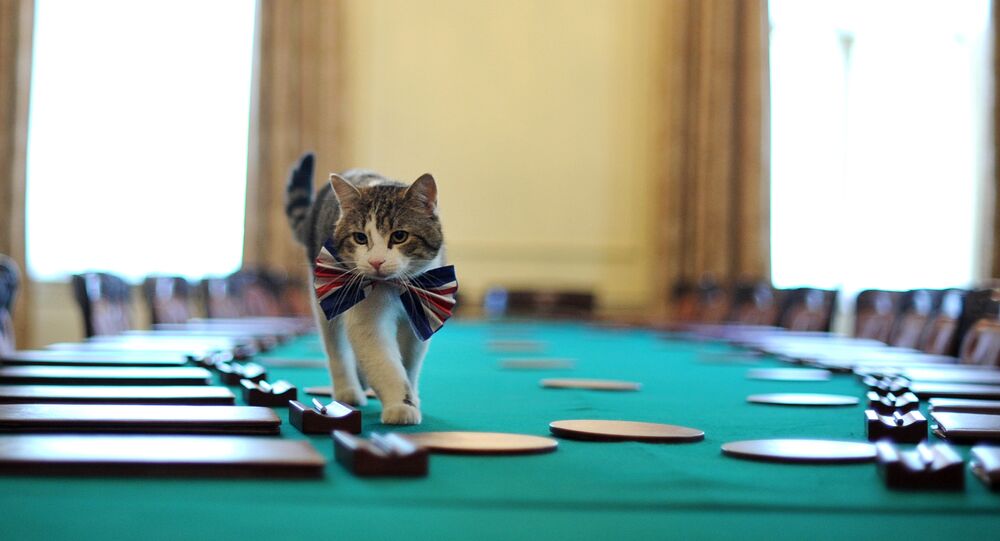 Is Key Figure Just a Whisker Away From Being Sacked from British Government?

It has been the subject of much media speculation and rumours that there could be a high profile sacking in the offing within the UK government after it was revealed somebody is falling down badly in their job.

Serious questions are now being asked over the role of a key figure within the British government sparking suggestions that a sacking could be imminent within No.10 Downing Street.

It has been revealed by a well-placed government source, the British premier Theresa May has suffered a "cat-astrophic" revolt by one of her closest aides that could eventually lead to a swift Brexit!!!

Larry the cat, it would appear, has been caught catnapping on the job, forcing Downing Street staff to call out pest control experts on 40 occasions in the last year.

Now I’m just a humble cat, but to leave the customs union there will have to be a hard border either between N.Ireland and the Republic of Ireland or between NI and the rest of the UK. Which is it? Might want to run your answer by the DUP… https://t.co/eQDnfXPHBn

Fake News — I’ve just been lulling the mice into a false sense of security…https://t.co/2DphtSfUdz

Official figures released under the Freedom of Information legislation show that May's moggie is struggling to keep the vermin at bay within the government building resulting in 29 being exterminated.

Indeed, on several occasions, press photographers have watched in amazement as rats and mice gleefully dodge the mouser as he relaxes on the pavement outside the official entrance.

His relaxed attitude and commitment to the job has already been seriously questioned after statistics suggested his close neighbour, Palmerston , who resides at the Foreign Office, is proving to be a more lethal weapon in the drive to keep vermin at a minimum.Palmerston has managed to catch no less than 27 mice since his arrival from Battersea Dogs and Cat Rescue home in April, 2016.

Making sure Boris doesn’t try to sneak in… https://t.co/o9k0NPKA6S

Lots of people asking who Theresa May has left in charge while she’s in China. All I’m saying is he’s furry, sleeps a lot but isn’t called Boris…

Despite his ability and work ethic being called into question, Larry is not losing any sleep over the matter, having taken to social media to tell his Twitter followers it was simply "fake news." He is also insisting it was part of a major ploy to "lull" the mice into a false sense of security!