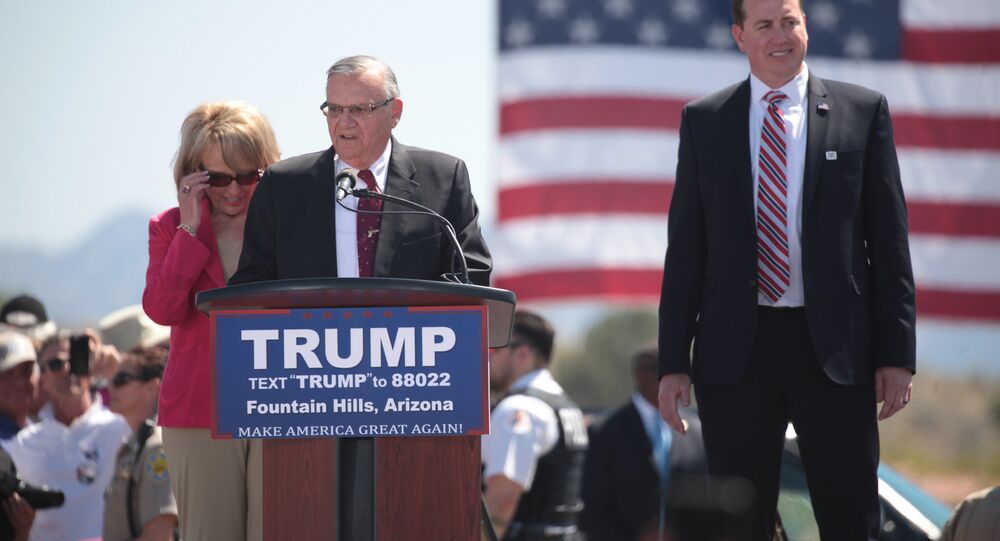 Arizona’s self-proclaimed enforcer of immigration laws may soon find himself behind bars after a federal judge rules that his office engaged in systematic racial harassment of his state’s Latino population.

On Friday, a federal judge ruled that the infamous Maricopa County lawman and Donald Trump surrogate Sheriff Joe Arpaio and three of his top aides violated a federal court order meant to curtail racial profiling by his agency.

The US District Judge Murray Snow court ruling held Arpaio in contempt on three counts, bringing to a close a yearlong showdown between a truculent sheriff who has faced charges of racism throughout his career and a crusading federal judge.

The sheriff’s supporters decry the ruling, citing bias by Judge Snow, a relative of well-known anti-racial profiling advocate Chad Snow, an activist who has repeatedly called for the Arpaio’s ouster.

Chad Snow and former US Senate candidate Randy Parraz led recall efforts against both Joe Arpaio in 2012, and Russell Pearce, the author of the notorious racial profiling law SB 1070, in 2010, through their organization Citizens for a Better Arizona. The effort against Pearce succeeded, but Arpaio successfully beat back the election challenge.

In his decision, Judge Snow wrote a harshly-worded 162-page decision stating that "the Court finds that the Defendants have engaged in multiple acts of misconduct, dishonesty, and bad faith with respect to the Plaintiff class and the protection of its rights."

The contempt proceedings focused on three alleged violations: (1) The sheriff’s office failed to turn over required video evidence, prior to the racial profiling trial; (2) the Maricopa County Sheriff’s Office (MCSO) continued to enforce federal immigration law after Snow expressly prohibited the practice; and (3) the sheriff’s deputy failed to collect evidence after the trial.

Attorneys for Arpaio acknowledge the failures to comply with the court order, but deny that the violations were willful – a distinction that will ultimately determine whether Arpaio will face civil or criminal contempt charges.

The case against Arpaio dates to a December 2011 injunction prohibiting the MCSO from engaging in law-enforcement practices that unfairly target Latinos. The controversial sheriff, who lacks direct jurisdiction over federal immigration laws, continued the practice of targeting and requesting papers from Arizona Latinos, campaigning openly on the issue.

Arpaio’s use of racial profiling and his crackdown on undocumented migrants finds its legal inspiration in the controversial law SB 1070. The 2010 law, struck down by the US Supreme Court, for a period of time emboldened the sheriff’s office to require Latinos to show evidence on demand that they were legal citizens.

The enforcement of that hotly-debated law led to the detention and improper deportations of dozens of US citizens of Latin American descent and caused thousands of Arizona Latinos to live in fear.

After the law was struck down, the unrelenting Arpaio vowed to continue the practice of racial profiling and using any other suitable means to limit what he viewed as an illegal immigration scourge. The Supreme Court ruled definitively that neither Arizona nor the Maricopa County Sheriff’s Office possesses the authority to enforce federal immigration law.

Arpaio, 83, is known for forcing inmates to live in tents and wear pink underwear under Arizona’s sweltering 115 degree temperatures.

Judge Snow is yet to determine whether Arpaio’s violations of the court order were intentional, in which case the Maricopa County Sheriff could soon be viewing the remainder of his life in pink underwear from the other side of the prison bars.