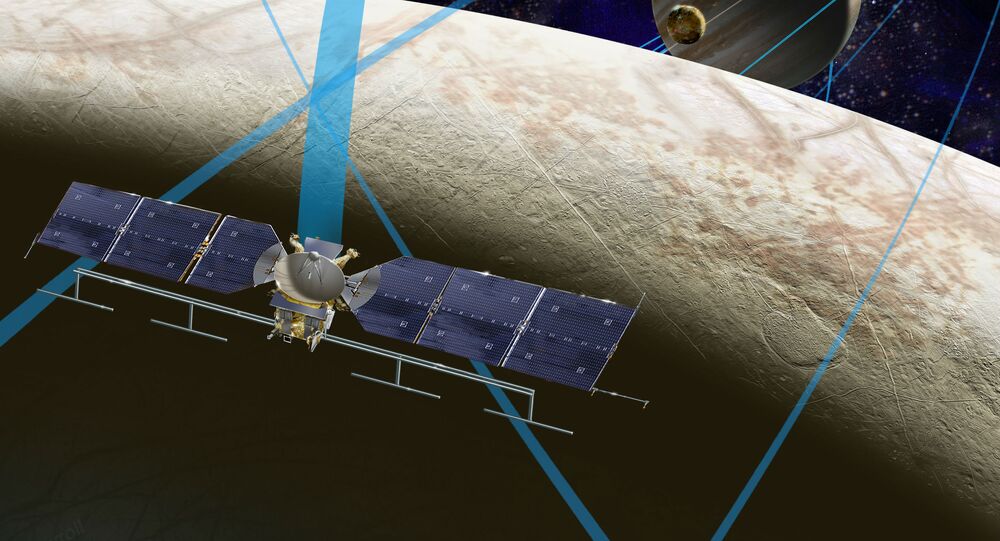 The NASA spacecraft set to pay a visit to Jupiter's icy moon Europa will use an array of instruments to assess its ability to support life, the agency announced Tuesday.

The moon, which is slightly smaller than Earth's, has an icy crust, but scientists say there is a salty ocean beneath that surface which could make it one of the most likely habitats for extraterrestrial life in our solar system.

The Europa Clipper is the probe NASA hopes to launch in the mid-2020s to explore the sixth closest of Jupiter's moons.

The probe will not land on the surface, but will "clip" the moon — enter into its atmosphere — 45 times during its 2 and a half years of orbit. The various instruments onboard will try to gather as much data during those "clips" as possible before flying out of orbit again.

"Europa is one of those critical areas where we believe that the environment is just perfect for potential development of life," Jim Green, NASA director of Planetary Science, told reporters at a press conference Tuesday. "This mission will be that step that helps us understand that environment and hopefully give us an indication of how habitable the environment could be."

© Flickr / Stuart Rankin
The surface of Europa is the smoothest of any solid object in the solar system and is covered with cracks and streaks, but not craters, due to its youth and tectonic activity. It is also one of the brightest and most reflective of our solar system's moons.

The probe will take nine instruments along on the 390 million mile trip which NASA selected from 33 different proposals. They hope these nine will be able to shed light on the depth and salinity of the ocean, the thickness of the ice shell, and the makeup of those dark streaks of "gunk" across the moon's icy surface.

"If we can determine what that brown gunk is, we can then understand what is in the water — what is in the oceans of Europa — and that is an incredibly important question to answer if we're trying to figure out if this place is habitable," said Curt Niebur, the Europa program scientist at NASA's Washington headquarters.

The final nine instruments that NASA announced Tuesday will be:

1) a magnetometer to measure the magnetic field of the moon,

2) an instrument to measure plasma currents and gain insight into ocean depth and salinity,

3) a spectrometer to determine what materials have been on Europa's surface (particularly anything that may have recently erupted to the surface),

4) a great camera to get some nice pics,

5) radar to detect features under the ice sheet,

6) a thermal imager to detect hotspots,

7) a mass spectrometer to analyze the atmosphere,

8) an ultraviolet spectrograph to investigate possible giant water plumes that seem to exist at Europa's poles,

9) and a dust analyzer to measure particles expelled by those plumes.

NASA announced earlier this year that $30 million of its 2016 budget will be dedicated to the Clipper mission. All told, the mission should cost about $2 billion (for comparison, the first of the Pentagon’s Ford-class aircraft carriers cost over $12 billion).

The Clipper's primary mission will be limited to assessing habitability, not the actual potential presence of extraterrestrial life forms, a far more ambitious goal.

"We don't have a life detector," Niebur told reporters. "We currently don't even have consensus among the scientific community as to what we would measure that would tell everybody with confidence: This thing you're looking at is alive. Building a life detector is incredibly difficult."