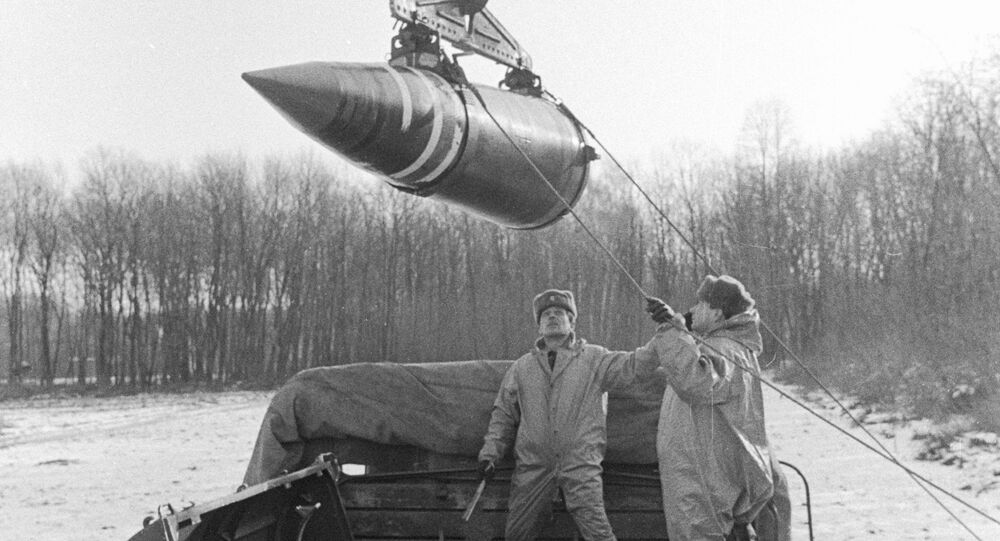 Ukraine became a nuclear weapons state in the 1990s after the collapse of the Soviet Union, briefly inheriting the third-largest nuclear arsenal in the world, including nearly 200 intercontinental ballistic missiles, dozens of bombers, and about 1,700 warheads. Kiev agreed to destroy some of the weapons, and transfer the rest to Russia, in 1994.

Ukraine may need to become a nuke-armed state again if the Western Alliance doesn’t allow it to become a member, Andriy Melnyk, Ukrainian Ambassador to Germany, has said.

“Either we are part of an alliance like NATO, and help to make Europe stronger, or we have only one option: to arm ourselves, possibly, to consider nuclear status once again. How else can we guarantee our protection?” the diplomat said, speaking to Germany’s DeutschlandFunk public broadcaster on Thursday.

Accusing Russia of wanting to “wipe out Ukraine as a state,” Melnyk said Ukraine needs not only moral support from the West, but modern weapons systems, as well as military assistance from alliance members including Germany.

Kiev inherited a major nuclear arsenal, including 176 ICBMs and 44 strategic bombers, after the collapse of the USSR in 1991. In 1994, Kiev agreed to eliminate this arsenal and join the Treaty on the Non-Proliferation of Nuclear Weapons, with Russia, the United States, and Britain agreeing to guarantee its security.

© RIA Novosti . Alexei Furman
Ukrainian Nuclear Industry Workers Sound Alarm About Threat of ‘Another Chernobyl’
Ukraine likely retains the technical capability to build a nuclear arsenal, however, the state of its civilian nuclear power programme leaves something to be desired. Last year, Ukrainian nuclear industry workers sounded the alarm about the threat of "another Chernobyl," citing a "dire situation" which they said was "taking shape in the country's nuclear energy sector" due to a lack of oversight, safety permits, and funds. After the deterioration of relations with Russia, Ukraine began buying nuclear fuel rods from Westinghouse, an American company. However, observers have expressed concerns that the fuel rods are not fully compatible with Ukraine's Soviet-era reactors.

After the 2014 coup d’etat, the Crimean referendum to secede from Ukraine and rejoin Russia, and the breakout of a civil war in the country’s east, Kiev broke with its pursuit of non-bloc status and reactivated earlier plans to join the alliance. Under NATO rules, countries suffering from civil war or unresolved conflicts with other nations are not eligible to join the bloc.

Recent weeks have witnessed a major surge in tensions between Kiev and the self-proclaimed Donbas republics, with the latter accusing the Ukrainian military of a series of provocations and of making preparations for a major offensive. Kiev and its Western backers have blamed Russia for the tensions, and accused Moscow of a military buildup on its borders. Russian officials have urged Kiev to stick to the terms of the Minsk ceasefire, and warned that it would consider Ukraine and its US and NATO partners responsible for the deterioration of the security situation.

© REUTERS / JOHANNA GERON
US Committed to 'Assisting Ukraine With Its Self-Defense Needs', Pentagon Chief Says
Signed in February 2015 after months of fighting between Kiev forces and local militias, the Minsk agreements envisioned a ceasefire, the withdrawal of heavy weapons from the line of contact, and the rebelling regions’ gradual return to Kiev’s jurisdiction, pending legislatively mandated guarantees of special autonomy status. The ceasefire portion of the agreements was implemented and has generally held, but its other points – including the autonomy guarantees – have not been realised by Kiev, turning the civil war in the country’s east into a frozen conflict.
...
Reddit
Google+
Blogger
Pinterest
StumbleUpon
Telegram
WhatsApp
251