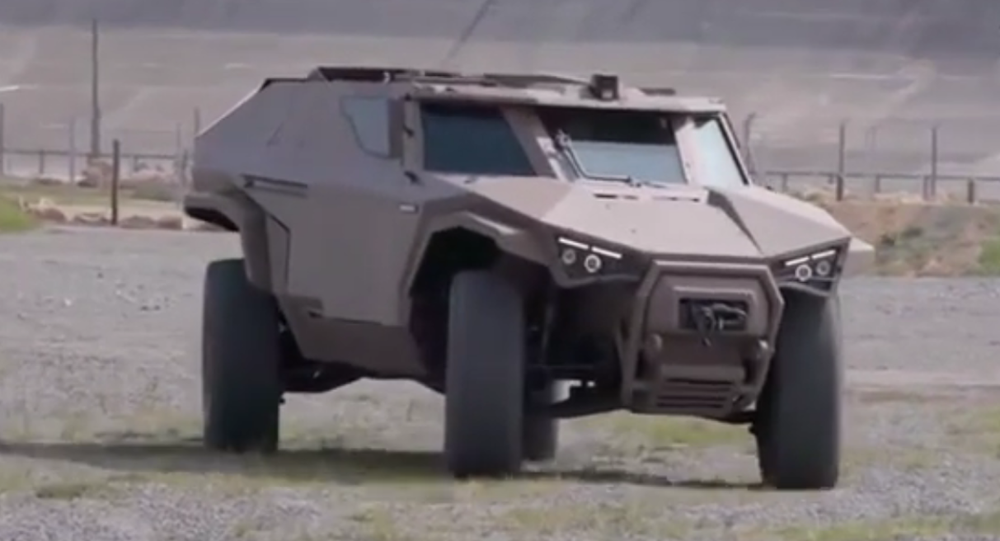 The French Army has initiated a massive overhaul of its armored vehicle fleet dubbed “Project Scorpion,” buying thousands of new scout and light armored vehicles by 2025.

A new armored vehicle with a novel design allowing it to roll sideways like a crab is now ready for the global market, French defense firm Arquus has announced.

The truck is powered by two engines: a 300-horsepower diesel engine and an electric 75-kilowatt motor capable of delivering 103 horsepower. According to defense sources, the engine block is located in its aft section, enabling it to be completely replaced in just 45 minutes. On top of that, the Scarabée also has a special “boost” mode that will immediately funnel all available power to its wheels. Since electric motors are capable of delivering maximum torque at 0 revolutions per minute, that means a ton of get-up-and-scoot power at the driver’s fingertips, in case the crew finds itself in a bad situation.

However, by far its most unique feature is the 4x4 truck’s forward and rear axles, which can be independently steered a full 90 degrees in either direction. That gives it unequaled tight-corner navigation as well as the ability to go sideways like a crab - an extremely useful feature in a light reconnaissance vehicle.

It is reported to weigh around 8 tons and is capable of carrying another two tons of cargo. It has two suspension systems, one for off-roading and another for transport, and can easily be hoisted in a cargo plane or underneath a heavy-lifting helicopter.

According to Aquus, Scarabée can also host a wide array of weapons systems, including a multi-caliber cannon, man-portable anti-tank missiles, anti-drone systems, and reconnaissance systems like cameras and radar. What’s more, they can be fitted at a remote-controlled station, too.

A part of Volvo Group, Aquus was once called Renault Trucks Defense and fills the vast majority of the French Army’s wheeled vehicle needs, including the Griffon and Jaguar vehicles at the core of the Scorpion project. Levacher said that several potential clients have “already expressed interest,” but no buyers as of yet. Scarabée is the company’s first solo-funded project.

Last September, Russia unveiled its own transforming armored scout car: the Drozd (“Blackbird”) is an all-wheel drive amphibious vehicle boasted to have considerable seaworthiness and to be capable of up to 100 kilometers per hour on land and 70 kilometers per hour on water. Its wheels can pull inward in just 12 seconds, enabling it to quickly switch between water and land travel.