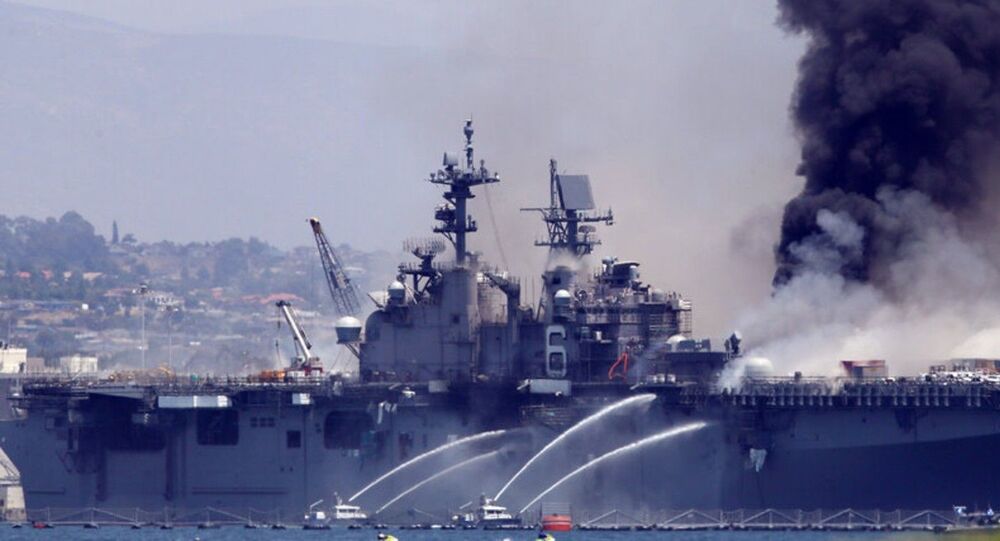 The total loss of the Pacific-based amphibious assault ship USS Bonhomme Richard could put a serious dent in Washington’s plans to base stealthy F-35 aircraft on its carriers in the Indo-Pacific region, experts have warned.

After a fire gutted the ship in July while it was harbored off of San Diego, California, the US Navy has decided not to try and refurbish the USS Bonhomme Richard. Rear Adm. Eric Ver Hage, commander of the Navy Regional Maintenance Center, told reporters Monday that making the ship seaworthy again would have been too costly.

Ver Hage said that rebuilding the amphibious assault ship back as she was before the July fire would have cost between $2.5 and $3.2 billion and taken between five and seven years. By comparison, the contract the Navy handed to Huntington Ingalls Shipbuilding in 2017 to construct the next amphibious assault ship, the America-class vessel USS Bougainville, was for just $3 billion.

Another option the Navy considered, which was turning the 41,000-ton Bonhomme Richard into a hospital ship, would have cost $1 billion but taken the same amount of time, Ver Hage said.

Instead, the ship will be decommissioned, a process that will take just one year and cost $30 million.

“We did not come to this decision lightly,” Secretary of the Navy Kenneth Braithwaite told the Times of San Diego. "Following an extensive material assessment in which various courses of action were considered and evaluated, we came to the conclusion that it is not fiscally responsible to restore her.”

“Although it saddens me that it is not cost effective to bring her back, I know this ship’s legacy will continue to live on through the brave men and women who fought so hard to save her,” he added.

Beginning on July 12, a fire believed to have begun in a storage area on the Bonhomme Richard raged for four days as the ship lay anchored off of San Diego. The fire injured at least 63 people and caused extensive damage to the warship, buckling its aluminum superstructure and leaving it listing to the starboard side. The following month, an unnamed senior defense official told the Associated Press an arson investigation was underway.

The fifth Wasp-class ship, the USS Bonhomme Richard was commissioned in 1998. It is a type of hybrid warship: part aircraft carrier and part amphibious landing dock, it can dispatch both helicopters and vertical-takeoff aircraft as well as squads of Marines and their equipment for beachhead assaults. At the time of the fire, the Bonhomme Richard was finishing up two years of updates that would enable it to carry the advanced F-35B Joint Strike Fighter. Those upgrades cost the Navy $250 million.

Bryan Clark, a retired US submarine officer and senior fellow at the Hudson Institute, told Defense News at the time of the fire that the disaster would be “a big problem” for Washington’s plans to continuously deploy carriers with the F-35 in the Indo-Pacific region.

“Only half of [our 10 amphibious assault ships] are able to carry F-35B and the Marines are looking to reduce their land-based squadrons. So the loss of Bonhomme Richard will impact the Navy’s ability to provide Combatant Commanders sea-based F-35s not subject to host-nation approval,” he said.