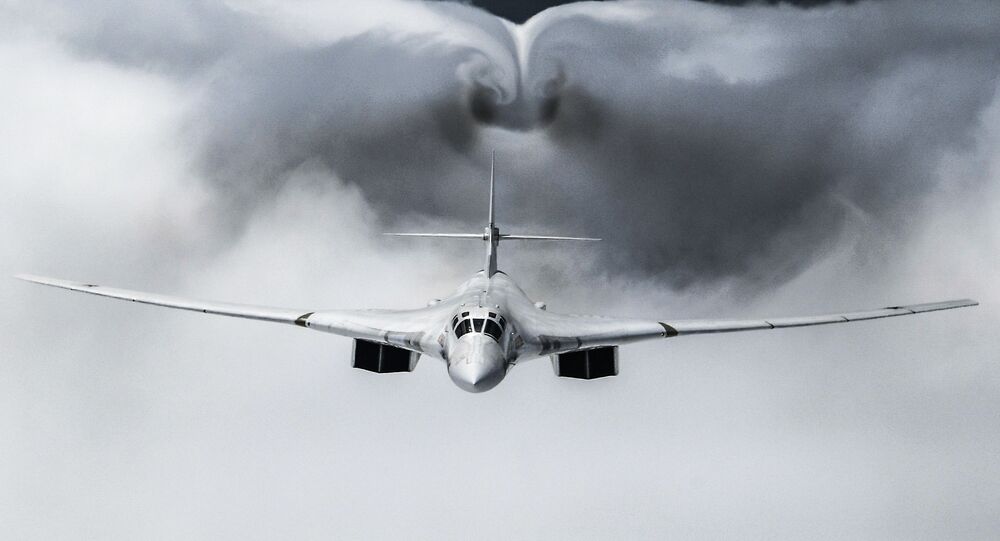 The War Zone has taken note of a recent Russian Defence Ministry photoshoot featuring Russia’s most advanced bombers being demonstrated on an airfield runway with “a fearsome-looking array” of munitions laid out in front of them.

“Until now…there have been precious few opportunities to see Russia’s strategic bombers displayed alongside their potential payloads. That has changed with the accompanying set of photos recently released by the Russian Ministry of Defence,” contributor Thomas Newdick writes, referring to the MoD photoshoot.

The photos include a Tu-160 ‘White Swan’ bomber, with 12 Kh-101/102 stealthy cruise missiles and 12 Kh-55SM strategic cruise missile laid out in front of it. The former missiles include both a nuclear and non-nuclear variant, and have a reported range of between 2,000 km to as much as 10,000 km, depending on configuration. The latter are the Kh-101/102’s predecessor, and have an estimated range of about 3,000 km. The Kh-55SM were first introduced into service in the mid-to-late 1980s, while the Kh-101/102s are thought to have begun deliveries in the early 2010s, with the non-nuclear variant used against terrorist targets in Syria.

The second photo features a Tupolev Tu-95MS, the tried-and-true workhorse which has served in the Soviet and Russian militaries going all the way back to the mid-1950s, and repeatedly upgraded and improved since then. The photo includes six Kh-55SMs and eight Kh-101/102s laid out before the bomber, with the bombs fitted aboard external hard points as well as using a rotary launcher. Despite the aircraft’s range, the Russian military has no plans to retire the veteran planes, with upgraded Tu-95s expected to remain in service until at least 2040.

The final photo shows the Tu-22M3, a variable-sweep wing bomber design used as a strategic and maritime strike bomber used by the Russian Aerospace Forces and previously, by the North and Pacific Fleet’s naval aviation.

To The War Zone’s surprise, the Tu-22M3’s missiles are not shown. Instead, the munitions include a pair of FAB-3000 6,614 pound bombs, as well as two smaller munition classes. The outlet points out that the bomber, dubbed the ‘Backfire’ by NATO, is capable of carrying up to three Kh-22 large, long-range anti-ship missiles, intended to strike large carrier strike groups and other large naval formations. The legacy system, whose production goes back to the 1960s, is an older design, and has a range of only 600 km. However, the missile’s ability to accelerate to Mach 4.6, or 5,600 km per hour, means that it “remains a problem for air defence systems despite its age,” according to the outlet. An externally-similar missile known as the Kh-32 began replacing the Kh-22 in the 1990s, and has an operational range of up to 1,000 km, as well as more powerful engine, allowing it to be used as a standoff weapon.

Ultimately, Newdick notes that although each of Russia’s strategic bombers were designed during the Cold War, they continue to “provide a useful capability and one that’s more flexible” than either strategic missiles or ballistic missile sites, the two other legs of the country’s nuclear triad. The fact that the bombers can be used to carry out conventional missions is an added bonus, he suggests.