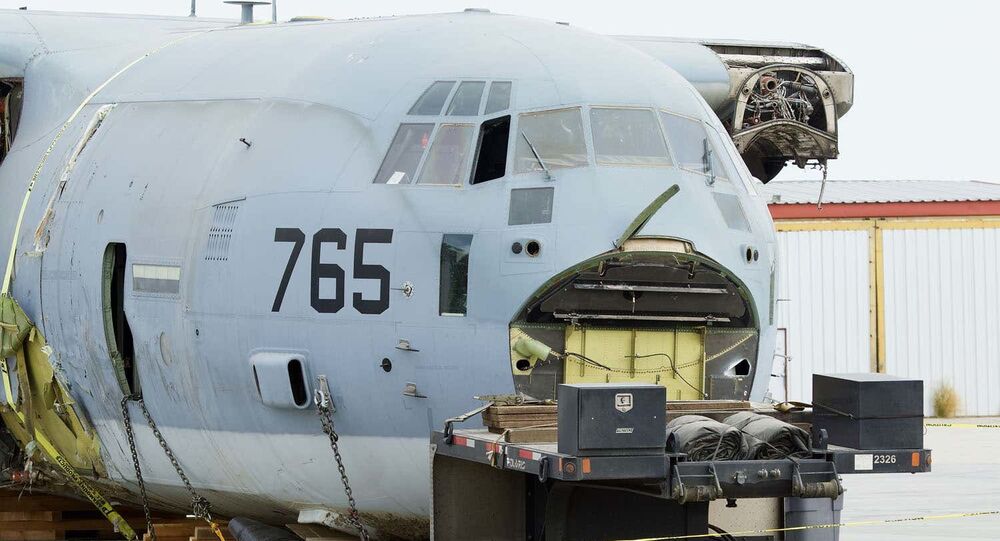 New photos have emerged of the US Marine Corps KC-130J Hercules aircraft that collided with an F-35 fighter jet before crash-landing in a California field last month. The aircraft has had most of its damaged parts removed, leaving a dented, stripped-down hulk.

On Saturday, The Drive published new photos of what remains of the KC-130J that survived a mid-air collision with an F-35 Lightning II stealth aircraft late last month. Even though much of the plane’s nose, wings, propellers and empennage have been removed, the parts that remain are dented, battered and gashed from the violent collision and subsequent crash-landing in which all the crew survived.

According to the outlet, the plane has been transported to Jacqueline Cochran Airport in Thermal, California - the airfield the Hercules was attempting to limp to on September 29 when it belly-landed in a carrot field south of town - and remains chained to the trailer used to haul it there.

Some of the notable damages visible in the photos are the long dent on the plane’s starboard side just behind the cockpit, where the airframe began to buckle, likely due to the stress of landing, and the wide gash further back on the same side that likely came from one or more of the propeller blades snapping of and striking the aircraft.

In all, for a plane carrying 60,000 pounds of jet fuel, the Hercules is remarkably intact. The credit for the survival of both plane and crew of four Marines surely goes to the pilots, who kept their cool throughout the episode, as radio recordings show. Here is how the plane appeared in the moments after the landing:

By my count this thing should have about 3 more propellers, 1 more refueling pod, and 1 more aileron. pic.twitter.com/oK5t8mzAy3

​“It was an impressive maneuver bringing it down safely by force,” 1st Lt. Brett Vannier, a spokesman at Marine Corps Air Station Yuma, from which the aircraft flew, told the Associated Press on September 30. “His skills kind of speak to itself just in the fact that everyone survived.”

“I think the KC-130 crew did a masterful job of airmanship to get that baby down,” retired Marine Corps Col. Pete Field, a former director of the Naval Test Pilot School, told AP.

The F-35 pilot also survived, although his plane did not. Locals captured the jet’s final moments after the pilot ejected as it plummeted to the ground, exploding in a huge fireball.

​Little else is known about the incident, such as exactly how the collision occurred, since the Marine Corps is still investigating. Nor is it clear what the KC-130J’s fate will be, if it will be rebuilt or scrapped.