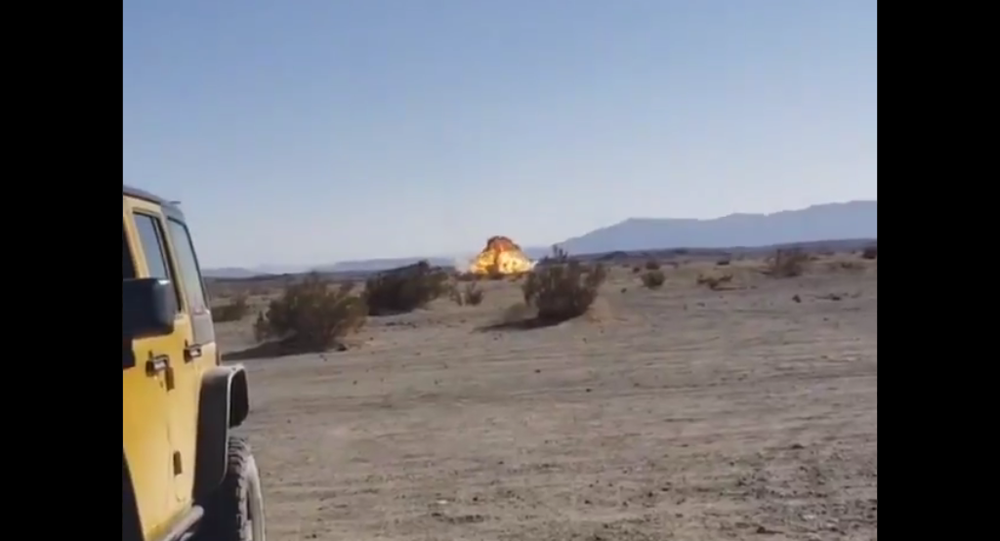 Two US Marine Corps aircraft crashed on Tuesday after colliding with each other. All crew survived, and the recording of exchanges between air traffic controllers and the crew of one of the planes, a KC-130J aerial tanker aircraft, has been obtained by the press.

On Tuesday afternoon, an aerial mishap resulted in two Marine Corps aircraft, the KC-130J and an F-35B Lightning II fighter, plummeting into the desert in southeastern California, according to a news release by Marine Corps Air Station Yuma in nearby Arizona.

The release is scant on details, but notes the incident happened while the F-35B was attempting to refuel via the KC-130J Super Hercules. According to the Desert Sun, the F-35B crashed into a state park near Salton City, a town on the west coast of the Salton Sea, igniting a fire that the town’s fire department successfully put out.

The F-35 pilot safely ejected and survived the incident. The final moments of the jet’s pilotless plummet to the earth were captured on film by locals:

​However, a good deal more is known about the moments after the collision onboard the Super Hercules, as the pilots wrestled the massive plane down. The Drive published a recording of a little more than four minutes of radio traffic before and after the collision.

In the recording, the large transport aircraft can be heard gaining permission to enter 17,000-foot airspace west of the Salton Sea before the incident occurs. Then, after American Airlines Flight 237, a passenger flight from San José del Cabo, Mexico, to Los Angeles, California, reports “pyrotechnics” and “explosions” on the ground roughly 5 miles from its location, the crew of the KC-130J announces their collision with the F-35B.

"LA Center LA Center, RAIDER 50 declaring an emergency, midair collision with VOLT 93,” the tanker’s pilot says in a shockingly calm and professional tone. “We have two engines out, we're leaking fuel, and likely on fire, and in emergency descent at this time. RAIDER 50.”

As the air traffic controller in Los Angeles attempts to ascertain some more details about the incident, such as just where this is happening, the Super Hercules repeats again: "We declare an emergency. We still have partial control of the aircraft. Two engines out. We are aiming towards uh..."

Sputnik Screenshot
A KC-130 Super Hercules tanker aircraft and an F-35B Lightning II fighter fly past at the Royal International Air Tattoo at RAF Fairford in Gloucestershire, England, on July 8, 2016

For the next few moments, only the air traffic controllers can be heard, but from the sound of it, the aircraft crew tried to limp to Jacqueline Cochran Regional Airport in Thermal, a few miles north of the Salton Sea and more than 20 miles from where the F-35 crashed.

The KC-130J didn’t make it. Instead, it belly-flopped into a carrot field just outside the airfield, according to the Desert Sun. Marine Corps Air Station Yuma reported that all the crew are safe. Photos of the crash-landed plane show a good deal of punishment, but a remarkably intact aircraft, all things considered.

By my count this thing should have about 3 more propellers, 1 more refueling pod, and 1 more aileron. pic.twitter.com/oK5t8mzAy3

​None of the reports make any mention of the KC-130J’s fuel load. According to maker Lockheed, the aircraft can tote as much as 60,000 pounds of fuel. Sputnik has previously reported that US Air Force regulations for preparing for a crash landing include firing off all ordnance and even ejecting all the plane’s flares, so presumably the Marine Corps Super Hercules would have had to take similar action and dump its remaining fuel somewhere. If not, the fact that the plane hit the ground and didn’t explode in a huge fireball is a truly incredible circumstance.

The US Marine Corps is investigating the incident, after which it is likely a great deal more information will be revealed.