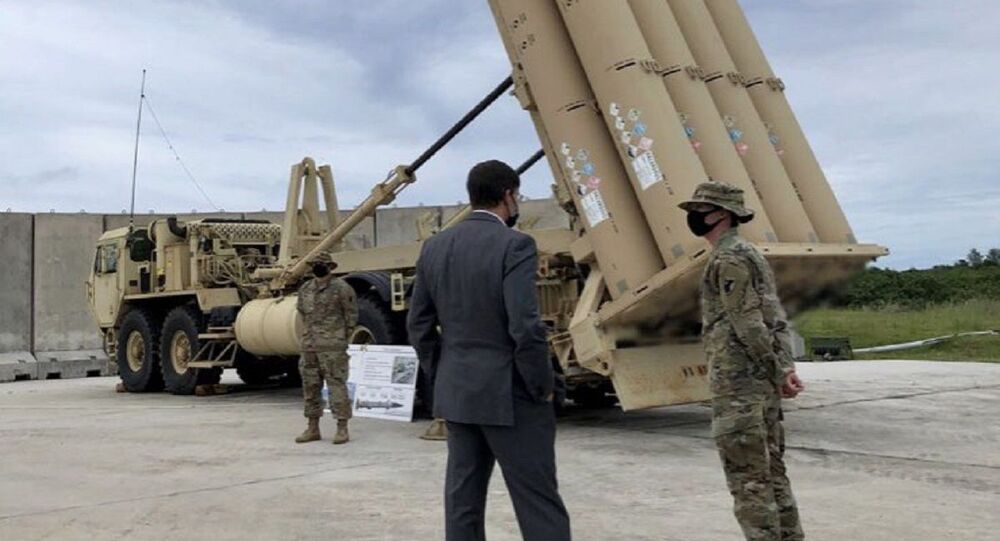 The US military deployed the Terminal High Altitude Area Defence (THAAD) anti-missile system to Guam’s Andersen Air Force Base in 2013, in response to the perceived danger posed by North Korean intermediate-range ballistic missiles. In July, US defence officials confirmed the system was also purposed to handle the ‘threat’ from China.

Drones outfitted with bright spotlights came from the sea and swarmed over the massive US Pacific military installation on Guam, spying on base assets including the THAAD battery stationed on the island, The Drive has reported, citing US Air Force data obtained through a Freedom of Information request.

The incursions were said to have taken place between March and April 2019, with the roughly 3x5 foot quadcopter-style drones flying just 20-30 feet above the ground, and spotted repeatedly in the early morning hours by troops manning guard towers near the area where THAAD is deployed.

© Photo : US Air Force
FOIA request by The Drive on an 'unauthorized unmanned aerial systems/security incident' in March 2019.

A separate Freedom of Information Act request for another of the drone incidents was turned down, with the military citing concerns related to privacy and law enforcement.

The Drive finds the information about the suspected drone incursions “highly troubling,” given that the drone aircraft were “able to penetrate…over an air defence system that is tasked with defending the highly strategic island from ballistic missile attacks…<>…America’s preeminent adversaries in the entire region would make taking out the THAAD battery on Guam a top priority during a conflict or even as part of a limited demonstration of force. Why barrage it with ballistic missiles or attempt a cruise missile launch from a forward-deployed submarine or even a clandestine commando raid when you can just fly a drone loaded with explosives into it?”

The outlet points out that “real-world events have highlighted many times over” that “you don’t need some high-end drone system” to cause real damage to sophisticated systems, pointing to drug cartels’ use of commercially available drones fitted with improvised explosive devices (IEDs), and the Yemeni Houthi militia’s successful attacks on Saudi oil facilities in September 2019.

The US deployed the THAAD missile defence system to Guam in 2013. More recently, Pentagon officials have pointed to its potential use in combination with other defences against the “threat capacity” to US interests in the Pacific said to be posed by China. In July, Indo-Pacific Command chief Admiral Phil Davidson confirmed that Guam is defended by THAAD and a ship-based Aegis anti-ballistic missile battery, but said the military needed to improve its missile defences given the People’s Liberation Army’s growing capabilities.

US missile defence systems’ ability to actually shoot down hostile missiles was called into question in 2016, after a North Korean submarine-launched ballistic missile was launched toward Japanese waters without being detected or destroyed by US or Japanese Patriot, THAAD or Aegis systems.

The US deployed a THAAD battery to Saudi Arabia last year in the wake of the Houthis’ drone attacks.