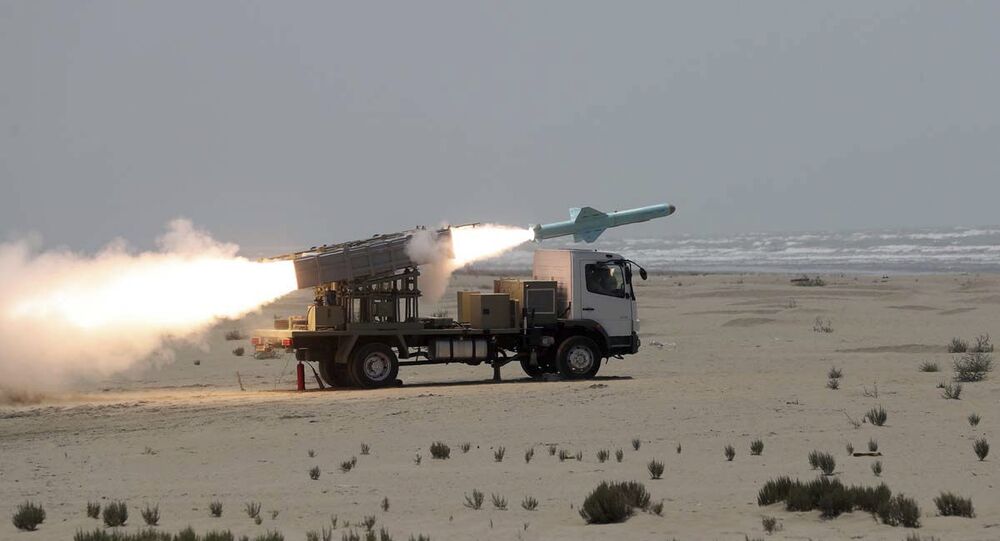 According to the military, the manoeuvres involve the navy, air force and ground forces, including a domestically-made submarine, fighter jets and air defences.

Iran’s armed forces on Thursday began an annual large-scale three-day exercise in the Gulf of Oman, near the strategic Strait of Hormuz through which a large share of all oil traded passes.

The spokesman for the Zolfaghar-99 drills, Shahram Irani, said that Tehran had warned all foreign aircraft to leave the area of the exercise.

According to the official, US drones, which were allegedly collecting data there, have left the scene of the manoeuvres.

The day before, Adm. Habibollah Sayyari, the commander of the annual manoeuvre, said that the war game was aimed at "improving readiness in confronting foreign threats and any possible invasion".

© AP Photo / Iranian government handout
Iran Boasts of Powerful Naval Strike Missiles Following US Drills in Persian Gulf
During other drills with the participation of the elite Islamic Revolutionary Guard Corps (IRGC) in July, Iran test-fired what it calls a “buried” ballistic missile.

The drills come amid continuing tensions with Washington that have been escalating since the US unilaterally withdrew from the Joint Comprehensive Plan of Action (JCPOA) in 2018.

One of the biggest escalations this year took place in January after the US assassinated prominent Iranian general Qasem Soleimani and Tehran responded with a missile attack on American military bases in Iraq that left numerous servicemen injured but stopped short of leading to fatalities.