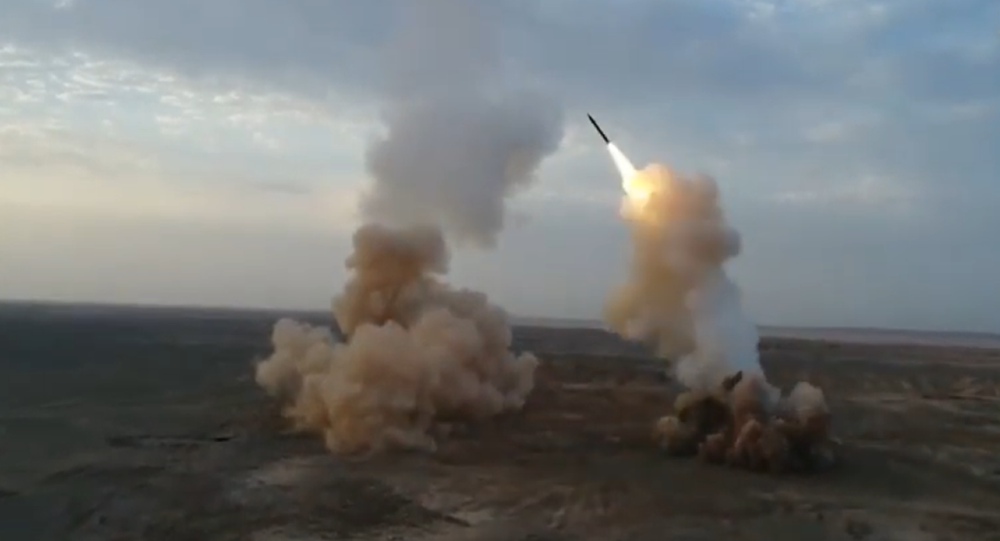 During its massive war drills in the south, Iran has test fired what it calls a “buried” ballistic missile.

The Iranian military has been engaged for several days in military drills that combined the regular armed forces with the elite Islamic Revolutionary Guard Corps (IRGC), and its air and naval forces as it practices fending off a massive naval assault by the United States.

The final act was dubbed “Payambar-e Azam 14” (Great Prophet 14), and several ballistic missiles were fired from underground from somewhere in the desert in interior Hormozgan Province. Video footage of the drills emerged on social media on Wednesday.

“During the recent drills, we managed to fire ballistic missiles from deep underground for the first time in the world,” Gen. Amir Ali Hajizadeh, commander of the IRGC’s aerospace division, told PressTV on Wednesday. “In other words, without using launch pads and other conventional equipment, the buried missiles crack the ground and hit their targets with precision.”

It’s unclear what “crack the ground” means here. It’s possible they are launched from silos that have been covered by earth and which do not have top doors that open prior to launch. One feature of note is that, contrary to other silo-launched missiles, those observed in Wednesday’s drills didn’t perform a “dynamic launch” that propelled them above ground level using gases before their main rocket engines ignited. Instead, they’re seen erupting from the ground with their main engines already on at full blast. This could be key to their unique method of launch.

Iran is known to have what it calls “missile cities” buried underground and underwater along its southern coast. It’s possible Wednesday’s test was the first-ever blast-off from inside one.

“All of our coasts are armed and the underground cities of the Army and the IRGC with various defense utilities have scattered over the entire southern coasts. The coast is fully armed as well,” he added.

In 2016, the IRGC published photos of one such “missile city” that housed an Emad medium-range ballistic missile. Projectiles that are liquid-fueled, like the Emad, must be topped off immediately prior to being launched, but solid-fueled missiles can be stored for long periods of time with their fuel already loaded, ready to be fired at a moment’s notice.

After a US drone strike outside Baghdad killed the commander of the IRGC’s Quds Force, Maj. Gen. Qasem Soleimani, in January, Iranian forces responded with a ballistic missile bombardment of Ayn al-Asad air base in Iraq, where the bulk of US forces in the country are stationed. The attack took no lives, but the intensity of the bombardment gave dozens of US soldiers and contractors traumatic head injuries as they hid in bunkers.

Wednesday’s drills clearly evoked memories of the January attack, as detection of the ballistic missile launches sent US forces stationed at two huge bases in the Persian Gulf - al-Dhafra base in the United Arab Emirates and al-Udeid air base in Qatar - scrambling into their bunkers once more. However, according to PressTV, the targets of the missile drills were several hundred kilometers away from either base, in the Gulf of Oman.

However, there might still be cause for concern at al-Udeid, which houses the forward headquarters of US Central Command: Tasnim reported part of the drills involved monitoring the base using Iran’s Noor satellite, which was launched into orbit in April.

The news agency also noted the missile drills targeted mockups of Terminal High Altitude Air Defense (THAAD) systems, used by the US to shoot down ballistic missiles as well as to see huge distances into adversaries’ territory with their powerful radars.