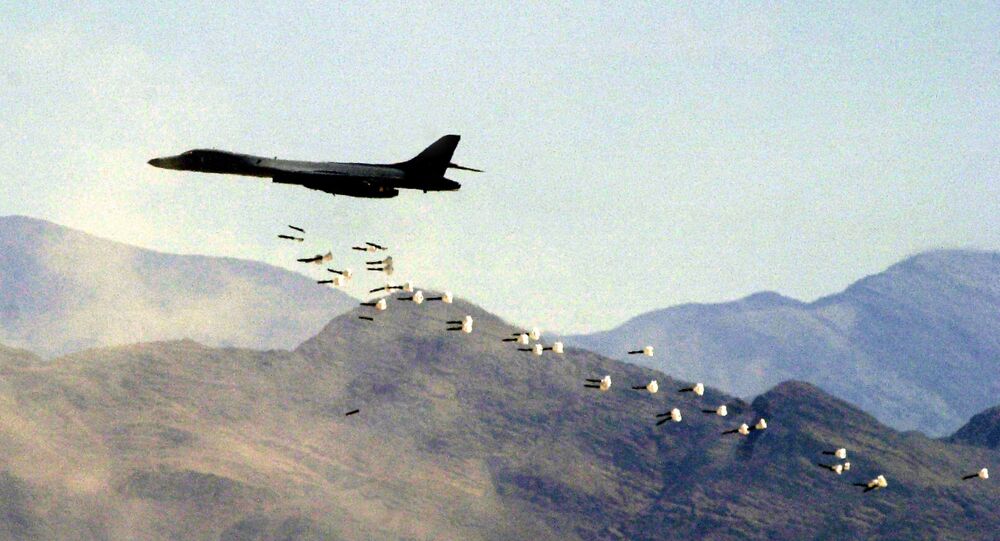 The US Air Force (USAF) recently tested a new cluster bomb that it says will no longer leave unexploded munitions on the battlefield, which can maim and kill innocent civilians decades later.

During tests at Nevada’s Nellis Air Force Base in July, the Air Force dropped 10 BLU-136 Next Generation Area Attack Weapons at targets to test the weapon’s effectiveness.

The weapon, which sits in the 2,000-pound bomb class, is intended to replace the Pentagon’s existing cluster bomb arsenal, following a 2017 doctrinal change in which the US gave up its pledge to get rid of bombs or shells that deploy smaller exploding bomblets.

“The operational tests were designed to gather data to determine the operational performance of the BLU-136, specifically in the areas of blast and fragmentation damage,” Lt. Col. Daniel Lambert, 28th Test and Evaluation Squadron Global Strike division chief, said in a USAF news release. “This data will help decision makers determine if the BLU-136 is a viable substitute for the Air Force’s fleet of cluster bombs.”

According to the Air Force, the new bomb’s fragmentation is non-explosive, meaning any pieces left behind cannot explode at a later time. According to The Drive, the bomb’s explosive filler fractures brittle cast ductile iron into little fragments of shrapnel, which it flings across the target area at incredible speed.

Citing a spokesperson from Eglin Air Force Base, Military.com reported the July tests involved three concentric rings 75 feet, 150 feet and 225 feet away from the target, and the tests found fragments that passed the furthest ring.

A New York Times report in 2017 found that cluster bomblets can have a “dud” rate as high as 20%, meaning that 1 in 5 of the small explosive devices is left behind on the target site afterward. Those bomblets can last for decades, enabling them to be found by civilians - especially children, as they resemble small toys - who are maimed or killed when they explode.

While cluster munitions have been used in many conflicts, the United States’ secret bombing campaign against Laos in the 1960s and 1970s dropped 2 million tons of bombs onto the mountainous Southeast Asian nation, including some 80 million cluster bomblets that never detonated. More than 20,000 Laotians have been killed by the unexploded bombs since the war’s end in 1975, and large parts of what had been farmland remains unusable even today.

20,000 ppl have been killed since the war ended by unexploded cluster munitions dropped by US bombers. Obama pledged $90 million to help #Laos clean up 80 million unexploded bombs, but huge areas of farmland in this agrarian country remain unusable. The US never apologized. pic.twitter.com/yubfWYsjtk

​Because of controversies over their use, more than 108 nations have signed the 2008 Convention on Cluster Munitions, forswearing their use. However, the United States refused to sign the treaty, but then-President George W. Bush made a separate pledge to end use of the weapons by 2019.

The Pentagon’s position at that time was that cluster munitions were actually humane weapons, and diplomatic cables published by WikiLeaks revealed the US put extensive pressure on allied nations to either reject the treaty or to reject the notion of a ban. The US also conspired with the British government to circumvent the ban and to continue storing its cluster bombs in the UK.

“Because future adversaries will likely use civilian shields for military targets – for example by locating a military target on the roof of an occupied building – use of unitary weapons could result in more civilian casualties and damage than cluster munitions," the Pentagon’s 2008 policy statement claimed. "Blanket elimination of cluster munitions is therefore unacceptable due not only to negative military consequences but also due to potential negative consequences for civilians."

This position was reaffirmed in 2017 when then-Defense Secretary Patrick Shanhan backtracked on the 2008 pledge.

“Although the Department seeks to field a new generation of more highly reliable munitions, we cannot risk mission failure or accept the potential of increased military and civilian casualties by forfeiting the best available capabilities,” Shanahan said in the policy change, according to the Associated Press. “Cluster munitions are legitimate weapons with clear military utility.”

On the 10th anniversary of the treaty’s entrance into force on July 31, 2020, Human Rights Watch blasted the US for its efforts to destroy the treaty and its continued opposition to ending cluster bomb use, but noted the US has allegedly not used cluster bombs since the 2003 invasion of Iraq, which the NGO credits to the staunch opposition to cluster bombs by Washington’s closest allies.