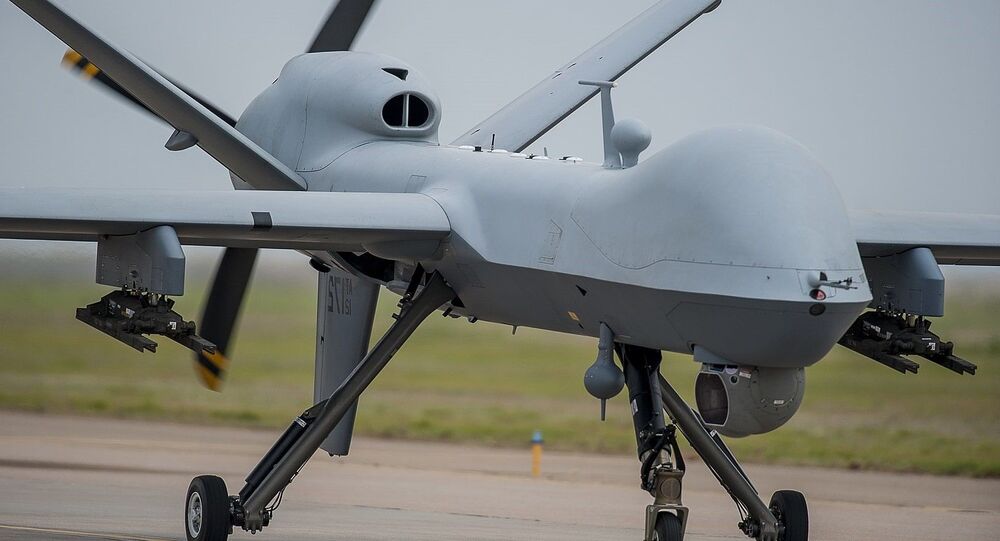 Using Mercenaries to Operate UK Drones is 'Dangerous' and 'Should Be Ended Immediately', Expert Says

Outsourcing armed drone operations to for-profit, non-military personnel by the British armed forces is a policy that 'blurs the line' between combatants and civilians, according to the founder of Drone Wars UK.

The United Kingdom is now using private military contractors (aka "mercenaries") and members of the Australian military to operate British armed drones, according to a new report, published on 18 August 2020, from the NGO Drone Wars UK. The same organisation recently warned that the UK's drone programme may end up being "jointly liable" for US war crimes.

Chris Cole, the director and founder of Drone Wars UK, tells Sputnik that the use of private military contractors to assist with armed drone programmes is "dangerous" and should be "ended immediately".

Sputnik: Drone Wars UK has revealed the use of private contractors as well as members of the Australian military to operate armed drones. Can you explain the nature of the role of non-UK military personnel in facilitating drone missions and strikes?

Chris Cole: The UK has contracted with General Atomics, maker of the Predator and Reaper drone, to have its personnel undertake the take-off and landing of UK armed drones at the base where they are deployed in the Middle East, believed to be Ali Al Salem air base in Kuwait.

Sputnik: How did your organisation make this discovery?

Chris Cole: We discovered this in data sheets attached to the annual report of the Infrastructure and Projects Authority (IPA), a UK watchdog which investigates large UK infrastructure projects.

Sputnik: Drone Wars UK has called the use of private contractors to operate UK armed drones "very controversial". Why?

Chris Cole: It is highly controversial to involve private contractors in operating military systems during armed combat operations... as the law gives special protection to members of the armed forces to undertake the use of lethal force but not civilians. While these individuals may only be flying the UK's armed drones at the beginning and end of UK military operations against ISIS, they are directly taking part in hostilities.

Some legal experts argue that private contractors undertaking such activities should be described as unlawful combatants. Civilians are protected in war time and may not be attacked while combatants lose that protection in exchange for not being treated as murders if captured - but as enemy combatants. Blurring the line between combatants and civilians is dangerous and that is what the use of private contractors during war time is doing. There's more background [in this article by strategist P W Singer].

Sputnik: Do these concerns also apply to the use of members of the Australian armed forces?

Chris Cole: No, the legal status of Australian pilots operating UK armed drones while they are officially embedded with UK forces is very different and relatively uncontroversial.  Many nations embed members of their own forces with allies in order to build understanding and co-operation.   However, it does indicate that the UK is still struggling to recruit and retain pilots to fly its armed drone missions.

Sputnik: Is this part of a growing trend of privatisation, whether within UK the armed forces generally or use of armed drones specifically?

Chris Cole: The use of private contractors to operate UK armed drones on operations can be said to be part of a growing trend of privatisation both within the armed forces and wider society.

Sputnik: Are there policy changes that you are now calling for, in light of these latest revelations?

Chris Cole: The fact that the UK is using both private contractors and Australian air force pilots to operate its fleet of armed drones on current combat missions begs the question why we are spending huge sums doubling the drone fleet when we can't keep current numbers in the air without help.

As well as operations against ISIS* in Iraq and Syria, British drones are also now being used on other missions, details of which are being kept secret from both parliament and the public. Introducing private contractors into flying combat missions, even in a limited way, is dangerous and short-sighted and should be ended immediately.  Parliament really needs to step up and press the government to declare where its drones are operating and for what purpose.