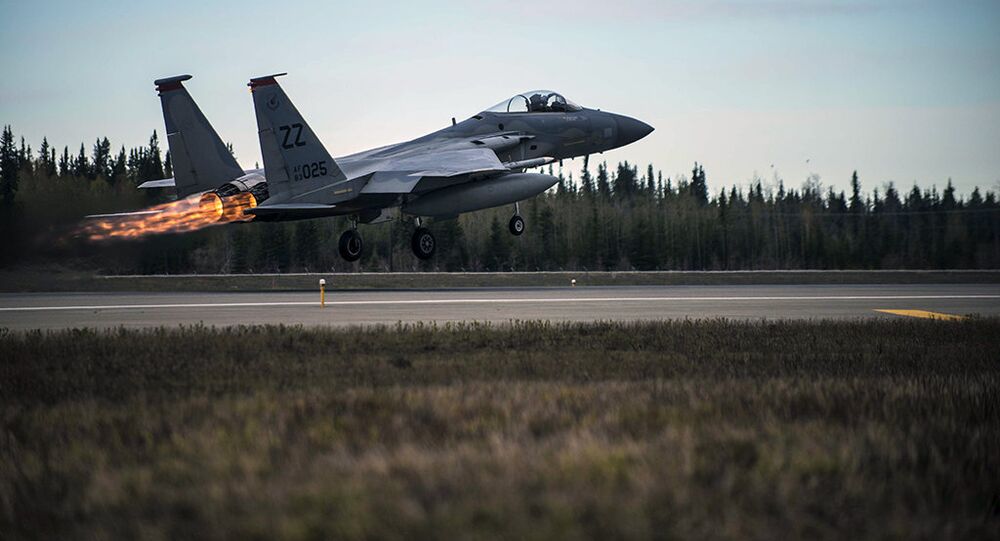 Russia became the first country to arm an upgraded Cold War-era aerial platform with a hypersonic missile, fitting the Kh-47M2 Kinzhal (‘Dagger’) aboard a workhorse Mikoyan MiG-31K interceptor jet in 2017, with the platform’s existence first revealed to the world in early 2018.

The US Department of Defence has ordered its first series of modernized Boeing F-15EX fighter jets capable of carrying hypersonic missiles, the aerospace and defence giant has announced.

“The F-15EX is the most advanced version of the F-15 ever built, due in large part to its digital backbone,” Lori Schneider, Boeing’s F-15EX program manager, said in a statement. “Its unmatched range, price and best-in-class payload capacity make the F-15EX an attractive choice for the US Air Force,” she added.

The upgraded airframe, first introduced in the mid-1980s by McDonnell Douglas before being bought out by Boeing, is expected to include the capability to carry new hypersonic missiles that are up to 22 feet (6.7 meters) long and which weigh up to 7,000 pounds (3,175 kg).

The type of hypersonic missile to be fitted aboard the planes remains unclear, with the US military-industrial complex said to be working on as many as nine separate air-, sea- and ground-launched hypersonic missiles, and the first expected to become operational by 2022.

The initial $1.2 billion contract is expected to get the Air Force eight F-15EX planes, and is said to include a one-time upfront engineering costs fee. The fighters are already being built at Boeing’s St. Louis factory, with the first pair expected to be delivered in 2021.

In a statement, the Pentagon confirmed that the $1.2 price tag includes funding for “design, development, integration, manufacturing, test, verification, certification, delivery, sustainment and modification of F-15EX aircraft, as well as spares, support equipment, technical data and technical support,” with the contract expected to run through December 31, 2023.

In addition, $20 billion more has been committed to the company for an indefinite delivery/indefinite quantity contract. The Pentagon plans to order as many as 144 of the upgraded workhorse fighter jets in the years to come.

The F-15EX contract is an important windfall for Boeing amid losses to its civil aviation division due to the coronavirus crisis and quality control issues following the scandalous grounding of its 737 MAX 8 aircraft. The F-15EX will be the first F-15-series aircraft delivered to the US Air Force since production was curtailed in 2004.

Despite the F-15 platform’s age, the Pentagon dusted off the design as a potential hypersonic missile carrier owing to its capability to carry larger, heavier weapons, and to accelerate to nearly Mach 2.8, which compares favourably to Lockheed Martin’s $1.6 trillion F-35 fifth-gen do-it-all jet, which has a top speed of only Mach 1.6 and a smaller weapons bay.

The Russian military, which became the first in the world to receive operational hypersonic capability in 2017, made the decision to field its cutting-edge Kinzhal hypersonic missile aboard an upgraded, tried and tested 4th generation platform, the Mikoyan MiG-31. The interceptor aircraft was first introduced in the early 1980s but has seen a number of key upgrades in recent years. In its MiG-31K configuration, plane can accelerate to Mach 3, and carry the Kinzhal, a missile which has a 2,000 km range, the ability to accelerate to Mach 10, and maneuver in flight, making it virtually impossible to intercept.

© Sputnik / Evgeny Biyatov
Multi-purpose fighter MiG-31 with the hypersonic Kinzhal rocket on the military parade devoted to the 73rd anniversary of the victory in the Great Patriotic War of 1941-1945
...
Reddit
Google+
Blogger
Pinterest
StumbleUpon
Telegram
WhatsApp
115