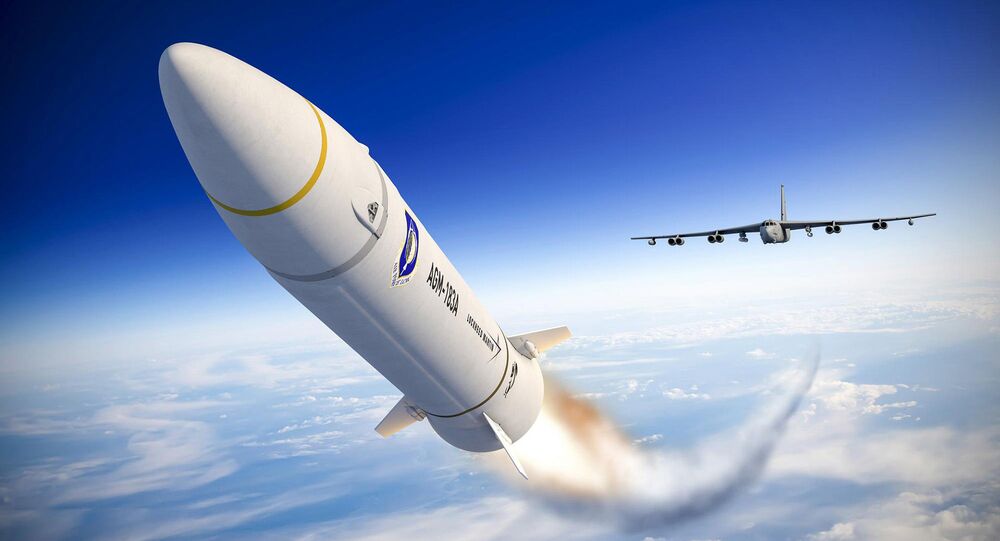 The United States is one of just a handful of countries in the world with an active hypersonic weapons development programme, with the Pentagon thought to be working on as many as nine separate air-, sea- and ground-launched hypersonic systems, among them two types of boost-glide systems and a scramjet powered cruise missile.

US weapons giant Lockheed Martin has released a computer-generated rendering showing off its new AGM-183A Air-Launched Rapid Response Weapon, a $988 million hypersonic missile system being developed by the company since mid-2018.

Lockheed Martin just released the image, which I’m calling the most useful official rendering of a boost-glide system yet released by anyone. pic.twitter.com/DRIpDDSGhZ

The missile, being developed for use aboard US Air Force strategic bombers, is featured to show a hypersonic glider warhead hidden within a rocket booster that is meant to accelerate the weapon to hypersonic speeds, after which it will glide, unpowered, to its target destination at a speed of up to Mach 20 (over 24,500 km per hour).

The system was first deployed for testing purposes aboard a B-52 Stratofortress bomber in June 2019, and work on the missile is expected to wrap up by December of 2022.

The AGM-183A is one of several hypersonic programmes on Lockheed’s plate, with another including  the ‘Hypersonic Conventional Strike Weapon’ (HCSW) programme, a design which was reportedly killed off earlier this month amid budget cutbacks. The Air Force insisted that the HCSW was canceled purely out of budgetary considerations, and not due to any performance issues.

Last year, US media reported that Washington was working on at least nine separate hypersonic missile programmes in a bid to counter Russian and Chinese developments in this area. The projects, created by companies including Lockheed and Raytheon, included lavish budgets of over $10.5 billion, with these funds accounting for research being carried out between 2020 and 2024.

Last month, despite boasting by President Donald Trump about America’s “big, powerful, accurate, lethal and fast” missiles, including “many” hypersonic missiles “under construction,” the Pentagon acknowledged that it had failed to keep up with its potential adversaries in the domain of hypersonic weapons research and development.

Russia, which is currently the only country in the world to possess hypersonic weapons that have already been deployed into active service, unveiled its hypersonic missile capabilities in 2018, with the systems designed to guarantee a Russian strategic response even in the event of a NATO first strike, and to puncture any enemy anti-missile defences which the alliance manages to develop and field. Earlier this week, US Navy Admiral Charles Richard admitted that current US air defences were incapable of countering hypersonic glide weapons like those wielded by Russia and China.

© Sputnik / Evgeny Biyatov
Multi-purpose fighter MiG-31 with the hypersonic Kinzhal rocket on the military parade devoted to the 73rd anniversary of the victory in the Great Patriotic War of 1941-1945
...
Reddit
Google+
Blogger
Pinterest
StumbleUpon
Telegram
WhatsApp
1447