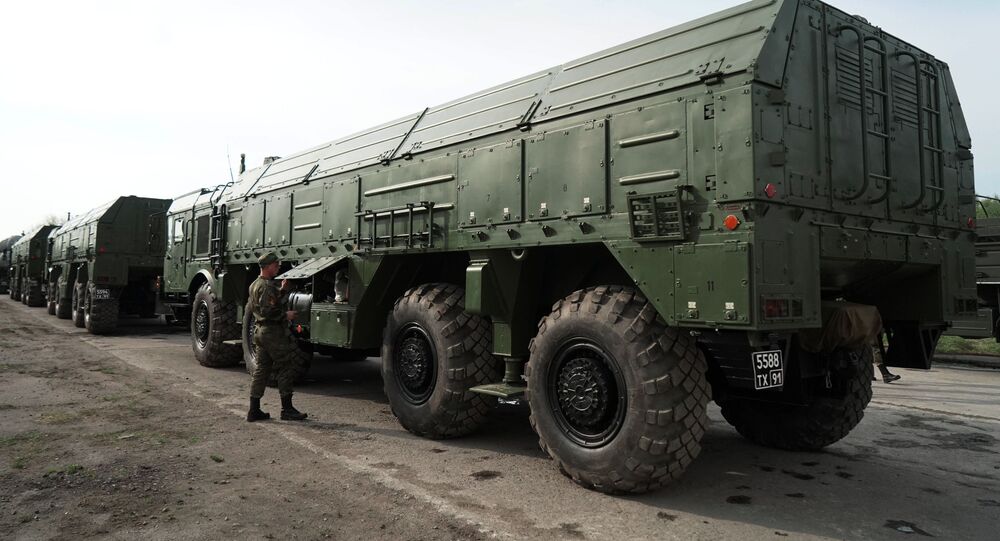 US and Polish forces kicked off large-scale ground-based drills dubbed ‘Allied Spirit’ in northwestern Poland on June 4, while a NATO maritime exercise called ‘BALTOPS 20’ in the Baltic region got underway on June 7.

“As part of planned combat training activities of Baltic Fleet forces in the Kaliningrad region, training in the delivery of mock conventional missile strikes was conducted using Iskander operational tactical units. The Baltic Fleet’s combat training activities were held against the background of the NATO BALTOPS 20 naval exercises taking place in the Baltic Sea,” the fleet said in a statement on Sunday.

The drills were said to have involved the covert deployment of the missile launchers to their designated areas and, once deployed, mock electronic single and group launches on targets simulating enemy missile launchers, military airbases, defended targets and command posts. After performing the launches, the units quickly changed their position to avoid a simulated retaliation.

Additionally, the combat units worked under conditions of simulated radiation and chemical contamination of the area, and in the repelling of an attack by enemy sabotage and reconnaissance units.

“Special attention was paid to improving the coordination of crews and units, the professional skills of personnel when moving to the designated areas and disguising their military vehicles,” the Fleet said in its statement.

Over 200 military personnel and about 20 pieces of military equipment were said to have been involved in the drill.

The Iskander missile system is a road-mobile short-range ballistic missile carrier with a range of 50-500 km, and can be armed with a variety of conventional and nuclear charges, as well as an EMP charge.

Nearby, NATO is continuing its BALTOPS 20 drills, which began on June 7 and are set to run until June 16 in the Baltic Sea region. The maritime-focused exercises are thought to involve some 28 warships, over two dozen aircraft and 3,000 personnel from 17 NATO countries, as well as Finland and Sweden. The drills are being commanded from NATO’s ‘Naval Striking and Support Forces’ headquarters in Portugal.

© REUTERS / Ints Kalnins
US Media Reveals Why Russia Really Does Have Reason to Be Wary of NATO Invasion
Meanwhile, in Poland, US and Polish forces kicked off the ‘Allied Spirit’ airborne and division-size river crossing drills on June 5, with the drills expected to run until June 19. Those exercises are said to involve some 4,000 US troops and 2,000 Polish army personnel, along with 100 main battle tanks, 230 other armoured vehicles, artillery and aviation.

On Thursday, the Baltic Fleet staged a separate, aerial drill involving a dozen Su-24, Su-27 and Su-30 aircraft against simulated maritime targets in the Baltic Sea.

The resumed NATO drilling near Russia’s borders comes following the scaling down of plans to deploy some 37,000 troops, including some 20,000 US troops airlifted from the United States, for exercises in Germany, Poland and the Baltic countries earlier this year. Those drills, dubbed the Defender Europe 20, were put on hold in March amid fears that they would cause a spike in coronavirus infections among military personnel.

On Friday, the US Army said it still plans to engage up to 1,000 US troops in a second phase of the Defender Europe 20 drills in Germany later this summer, along with several other exercises on the continent.