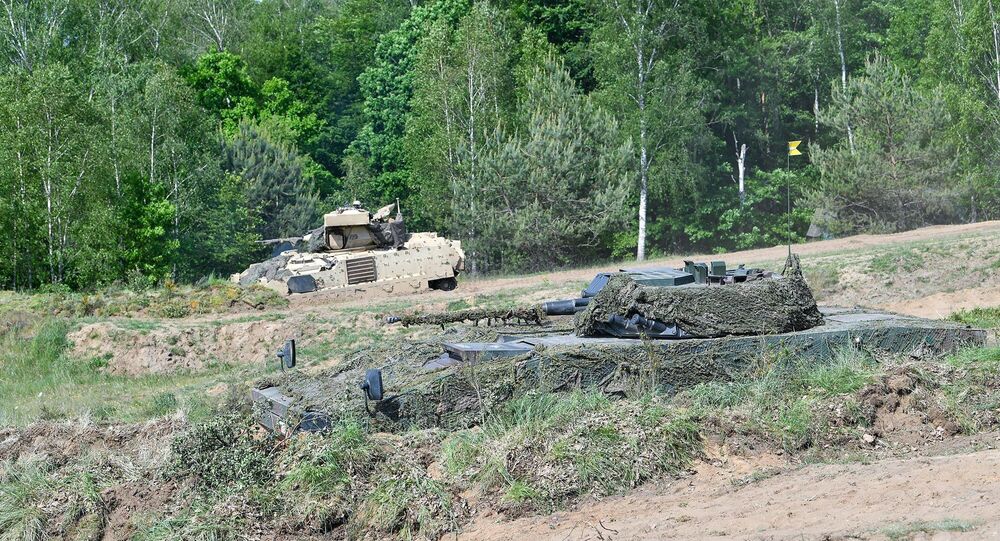 In mid-March, the Pentagon cancelled massive war games involving tens of thousands of NATO troops amid concerns over the coronavirus. The drills were meant to include the airlifting of some 20,000 US service members from America to Europe, and to become the largest deployment of their kind since the Cold War.

Poland’s Defence Ministry has confirmed the resumption of NATO’s Defender Europe 20 drills, with Defence Minister Mariusz Blaszczak on hand to inaugurate joint Polish-US exercises at the Drawsko Pomorskie training area in the country’s northwest on Thursday.

The drills include some 4,000 US combat troops and 2,000 Polish army personnel, along with 100 main battle tanks, 230 armoured vehicles, artillery and aviation.

The drills are smaller in scope than previously planned, with plans initially including the deployment of 20,000 US troops to Europe from the United States to join another 9,000 US troops already stationed in Europe, plus troops, equipment and support personnel from over a dozen other NATO and partner countries, for a total of 37,000 troops. The exercises were initially intended to stretch out across Germany, Poland and the Baltic countries bordering Russia. Berlin withdrew from the games in March, with the Pentagon’s European Command following suit shortly thereafter.

Poland’s 🇵🇱 Minister of National Defence @mblaszczak is visiting Polish & US troops at #Drawsko Pomorskie training area where the joint 🇵🇱🇺🇸 exercise #DefenderEurope 20 Plus is about to kick off.#StrongerTogether #WeAreNATO pic.twitter.com/YhkLDaEA2X

Defence Minister Blaszczak called the US deployment to Poland in the midst of the coronavirus pandemic ‘an expression of trust’ and thanked the US for its presence, suggesting it made Warsaw safer.

The Polish-US drills are expected to run until June 19, and to involve interoperability combat training at the brigade level. The exercises will involve a simulated river crossing operation using armoured units and airborne troops.

Moscow has not commented on the new, smaller-scale Defender Europe drills, but previously warned that NATO should consider the dangers of escalation caused by saber-rattling, and added that the alliance’s exercises could not force Moscow to change its foreign policy.

In mid-February, NATO chief Jens Stoltenberg insisted that the alliance wants “a better relationship” with Russia, but would continue to support sanctions and increased military readiness against Moscow. NATO’s combined defence budget is already 20 times higher than Russia’s, with the bloc committing to spend an additional $100 billion on defence in 2020, or more than double what Moscow spent on its entire military in 2019.