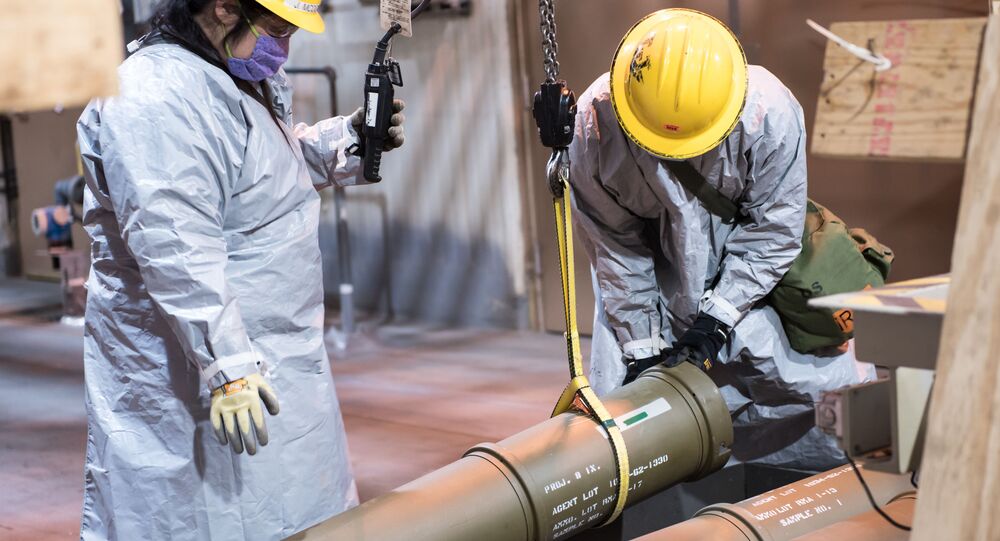 A US Army facility in Kentucky announced earlier this week it had destroyed the last of the United States’ 8-inch artillery shells containing the nerve agent sarin. It is one of two such plants scheduled to destroy the entire stock of US chemical weapons before 2024.

On Tuesday, the Blue Grass Chemical Agent-Destruction Pilot Plant (BGCAPP) announced it had completed the project it began in January of destroying the US Army’s stock of GB, the NATO designation for the sarin gas poisonous nerve agent.

“We are one step closer to destruction of the chemical weapons stockpile in Kentucky and fulfilling our pledge to the nation and an international arms control treaty,” Michael S. Abaie, chief of the Program Executive Office, Assembled Chemical Weapons Alternatives (PEO ACWA), said in the Tuesday news release. “The performance at this facility has been incredible, and that’s aside from doing this work safely during a pandemic. We are all justifiably proud of this team.”

Program Executive Office, Assembled Chemical Weapons Alternatives
Two operators work together to place one of the last overpacked 8-inch projectiles containing nerve agent into a tray to begin the destruction process at the Blue Grass Chemical Agent-Destruction Pilot Plant May 9. The last GB 8-inch projectile was destroyed May 11, marking the complete destruction of an entire type of chemical weapon.

The PEO ACWA is an agency created by Congress in 1996 to oversee US compliance with the newly signed Chemical Weapons Convention, which mandated the destruction of US chemical weapons and banned their use. However, chemical engineering company Bechtel helped build and run the PEO ACWA plants.

The devices destroyed were M426 8-inch artillery shells, designed to be fired out of a 203-millimeter cannon like that found on the M110 and M115 howitzers. In all, Blue Grass has destroyed 28 tons of sarin stored in some 4,000 shells.

Photos shared by the Defense Visual Information Distribution Service (DVIDS) show the last of the weapons being loaded into a truck, and the now-empty magazine that once held the 28 tons of sarin now eliminated by the Blue Grass facility.

Angela Messinger
BGCA toxic materials handlers guide the last of the GB projectiles into an enhanced on-site container for delivery to the Blue Grass Chemical Agent-Destruction Pilot Plant for demilitarization.

According to the news release, destruction of the shells involves disassembling the weapon, draining the chemical agent, neutralizing it by mixing it with water and a caustic agent and then heating the metal parts to 1,000 degrees Fahrenheit. The watery mixture, called hydrolysate, is then stored in a holding tank to await another process called supercritical water oxidation. In this process, the hydrolysate is mixed with oil, water and oxygen and superheated in a pressure chamber, causing it to break down into carbon dioxide, water and salt products.

The resulting brine is then “shipped off site to a licensed treatment, storage and disposal facility,” as PEO ACWA says.

However, Blue Grass and its partner facility in Colorado, the Pueblo Chemical Agent-Destruction Pilot Plant (PCAPP), still have a long way to go before the US is free of chemical weapons. The stockpile was once 10 times the size it was back in January, as the US constructed huge amounts of the weapons during the Cold War, but at Blue Grass alone there are still some 523 tons of chemical agent configured in 155-millimeter projectiles containing mustard gas and VX nerve agent, as well as an undisclosed number of M55 rockets containing GB and VX nerve agent to be destroyed.

In February, Pueblo announced it had destroyed half of the US’ massive mustard gas stockpile, a gas that saw heavy use during World War I and causes tissue damage upon contact, including skin blisters, blindness and damage to internal organs.