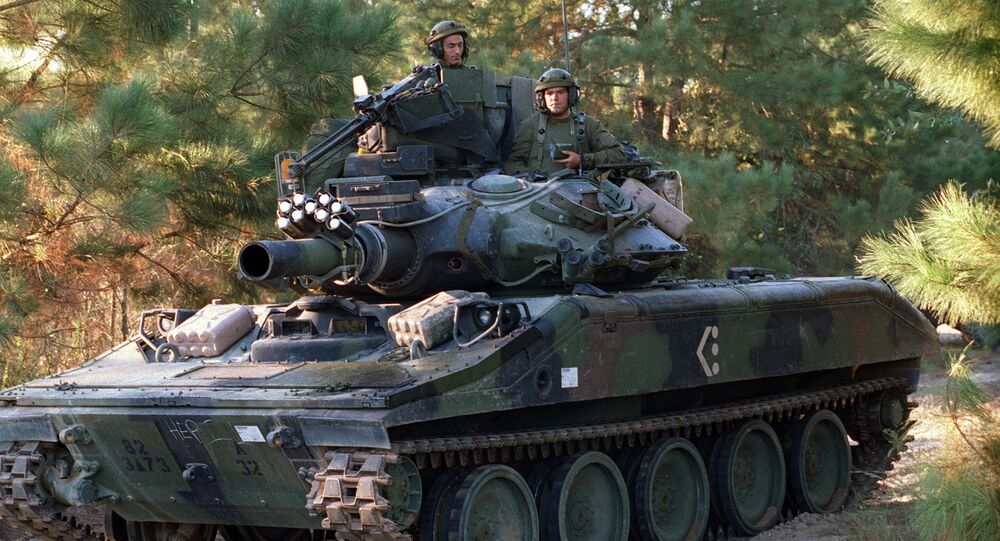 The Tank That Dropped From the Sky: Story of the US Army's M551 Sheridan

While proving useful in three wars – the Vietnam War, “Operation Just Cause” in Panama, and the Persian Gulf War in Kuwait - the M551 Sheridan light tank has gone down in history as “troublesome” in action, despite being an innovative weapons system.

The M551 Sheridan light tank, developed by the United States and named after General Philip Sheridan, the Union cavalry general of the Civil War, albeit with a set of troublesome failures, left a gaping hole in the Army once it was retired without replacement in 1996. Here are some of the reasons why.

M551 "Sheridan" Armored Reconnaissance/Airborne Assault Vehicle was a light tank developed when the US Army was stepping away from the concept of light tanks in favor of the main battle tank, writes The National Interest.

However, as the main battle Patton tanks at the time still had speeds of no more than around thirty miles per hour, divisions required a light tank that could be airlifted to offer mobile antitank weaponry to counter attacks on airborne troops after a parachute drop.

A US M551 Sheridan looks over the West German countryside, 1970s. Fast, manoeuvrable and small, it was well suited to a reconnaissance role, but poor reliability of the electronics and vulnerabilities discovered earlier in Vietnam condemned it to a short service life. pic.twitter.com/IfIeE12EDh

​The Sheridan entered service at the insistence of General Creighton Abrams, the US Commander of Military Forces in South Vietnam at the time. The tank saw combat service in Vietnam in January 1969, replacing heavier and slower M48 Patton tanks, while in April and August 1969 the tanks were deployed to units in Europe and South Korea.

The Sheridans also saw limited service in “Operation Just Cause” in Panama, and the Persian Gulf War in Kuwait.

Designed to be landed by parachute and to swim across rivers, the tank weighed fifteen tons with a top speed of forty-three miles per hour.

The Sheridan accommodated a crew of four in an armored steel turret and aluminum hull, and could make river crossings at three miles per hour due to a hinged flotation screen that could be extended from the top of the hull. This could be opened up into a sloping vertical surface in front of the driver, in the manner of a boat hull bow, about level with the top of the turret. The remainder of the water barrier was of fabric, folding up from compartments lining the upper corner.

The tank’s light weight and high mobility were tremendous advantages, as it did not get stuck in the mud as often as the 52-ton M48 Patton tank.

The Sheridan tank’s most striking feature was its technically advanced but “troublesome” M81/M81 Modified/M81E1 152mm gun/launcher, which could fire both conventional ammunition and the newly developed MGM-51 Shillelagh guided anti-tank missile.

Each Sheridan tank was fitted with nine Shillelaghs and twenty shells as standard, as well as .50 caliber and 7.62-millimeter machine guns mounted on the turret and hull, respectively.

Although it could fire huge caseless shells that carried more of a punch to infantry than the 90- or 105-millimeter shells fired by Patton tanks, the short-barreled gun was found lacking in muzzle velocity.

This meant it could not provide accuracy at long ranges, a pndiercing heavy tank armor through kinetic energy was also a problem.

When used at medium or long range, the gun launched the MGM-151 Shillelagh antitank missile at targets up to two or three kilometers away.

Another serious deficiency was that the gun had too much recoil for the vehicle’s light frame. At times, the second and even third road wheels would leap up off the ground after a shot from the heavy main gun. The motion was criticized for potentially causing chest injuries to the commander if he was peering over the hatch.

The missile system’s electronics similarly suffered in the recoil.

A M551 Sheridan tank moves out during an operation north of Tam Ky (18th March, 1970) pic.twitter.com/PTAuRfZrt8

​Another issue was the partially automated loading system. This reduced the gun’s rate of fire to some two rounds per minute. By comparison, the crew of a M48 tank could potentially fire around a dozen ninety-millimeter shells.

The Sheridan’s caseless 152mm main gun rounds with loose propellant were also a potential safety hazard. In cases when the warhead separated from the propellant during loading, the unspent charges remained on the turret floor.

The Sheridan light tanks’ main shortcoming, writes the outlet, was its poor survivability, as its armor was vulnerable to land mines and rocket-propelled grenades.

In truth, it was not intended to repel anything heavier than a heavy machine gun round.

Besides the flammable aluminum hulls, the Sheridan’s caseless 152-millimeter shells rendered it vulnerable to detonating when the vehicle was penetrated. These features resulted in a low crew survival rate.

Nonetheless, the Sheridan tank was reportedly well liked by the troops despite the criticism it endured from senior officers.

As the last Armored Cavalry Regiments were withdrawn in 1972, the Sheridan tank completed its service in Vietnam, with the Army starting to phase out the vehicles by the late 1970s.

Nonetheless, as upgraded models, the M551A1 TTS with thermal sight for night combat remained in service with airborne formations, and in 1989, Sheridans of the Third Battalion of the Seventy-Third Armored were used in the first and only parachute drop of US tanks into combat by C-130 transports onto Torrijos/Tocumen Airfield in Panama during Operation Just Cause.

Surprise From the Sky: How the M551 Sheridan Tank Could Be Air Dropped on Its Enemies https://t.co/t7HRcyQd64

​A year later, fifty-one Sheridans were deployed to Saudi Arabia with the Eighty-Second Airborne Division as part of Operation Desert Shield.

As part of the Eighty-Second Airborne’s rapid reaction force, the Sheridans remained in US service until being retired in 1996.

​There was never a replacement for the Sheridan tank in the Airborne branch, as currently modern antitank missiles such as the Javelin are deemed better for antitank defense of airborne troops than a light tank vulnerable to antiarmor return fire, despite its effective infantry support in the face of small arms and light support weapons.

That said, as its history shows, the Sheridan tank was appreciated for being in the right place at the right time.

Flying Tanks: World's Top Armored Vehicles Not Afraid to 'Jump' Out of Airplanes