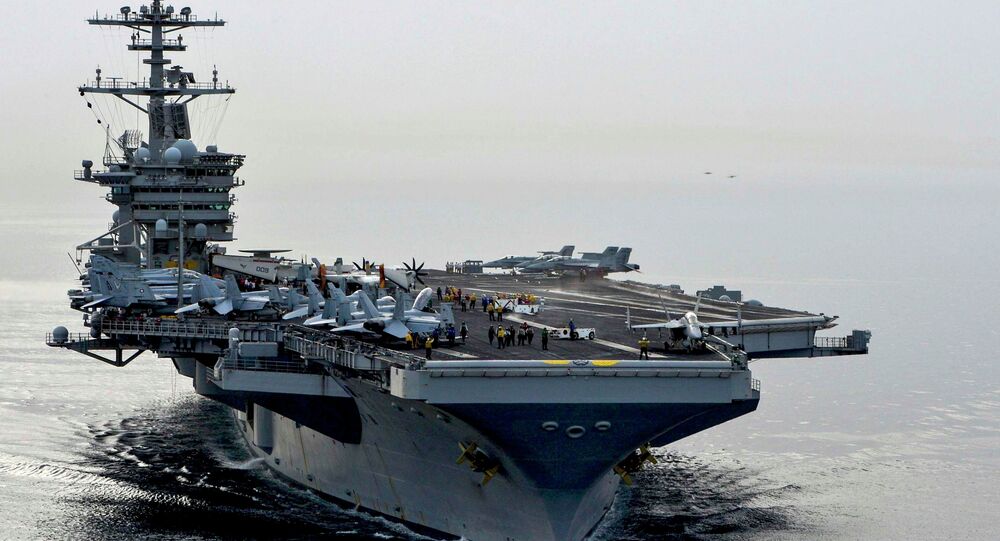 After docking at the Vietnamese port of Da Nang, during which the crew went ashore and interacted with locals, the US Navy aircraft carrier USS Theodore Roosevelt pulled into Guam last week amid reports of several cases of COVID-19 registered among the crew.

The commander of the USS Theodore Roosevelt, a US Navy aircraft carrier consumed by an outbreak of the COVID-19 coronavirus, has urged the Navy’s Pacific Fleet in a memo to take immediate action to save the lives of his crew, according to three US defense officials cited by CNN.

Stating that the spread of the disease is “ongoing and accelerating," Capt. Brett Crozier appealed:

“We are not at war. Sailors do not need to die. If we do not act now, we are failing to properly take care of our most trusted asset — our Sailors."

The commander of the vessel, which docked in Guam last week after several members of its crew tested positive for COVID-19, continued:

"Decisive action is required. Removing the majority of personnel from a deployed US nuclear aircraft carrier and isolating them for two weeks may seem like an extraordinary measure… This is a necessary risk. It will enable the carrier and air wing to get back underway as quickly as possible while ensuring the health and safety of our Sailors. Keeping over 4,000 young men and women on board the TR is an unnecessary risk and breaks faith with those Sailors entrusted to our care."

CNN cited a US Navy official as confirming that the commanding officer of the Theodore Roosevelt had warned the Navy’s Pacific Fleet on Sunday evening that there were “continuing challenges in isolating the virus."

The official was cited as saying:

"The ship's commanding officer advocated for housing more members of the crew in facilities that allow for better isolation."

Regarding the number of registered coronavirus cases, another Navy official was cited as saying it had soared to at least 70 as of 31 March.

In response to the news, the commander of US Pacific Fleet Adm. John Aquilino declined to share specific numbers regarding the infected sailors aboard the nuclear-powered aircraft carrier.

On the memo dispatched by Capt. Brett Crozier, Aquilino responded by saying:

"We're welcoming feedback. ... We want to make sure we understand exactly what the leader on the ground needs."

The commander of US Pacific Fleet continued:

"We are on the same sheet of music and I am really trying to make it happen more quickly but there are some constraints we are operating around."

Among issues potentially delaying the measures urged by Capt. Brett Crozier the Admiral reportedly underscored lack of capacity to house, isolate and quarantine sailors in Guam, where the ship is currently in port.

Previously, US Secretary of Defense Mark Esper was quoted by CBS as responding to the letter by saying he would “rely on the Navy chain of command” to assess the volatile situation and make sure they provide the captain and the crew all the support they need to get the sailors healthy and the ship back at sea."

Acting Navy Secretary Thomas Modly was quoted by CNN as saying he was aware of the letter from Captain Crozier and the chain of command had been working throughout the past seven days to move the sailors who had tested positive for the virus from the vessel, however, Guam lacks adequate accommodations.

"We don't disagree with the (Commanding Officer) on that ship and we're doing it in a very methodical way because it's not the same as a cruise ship, that ship has armaments on it, it has aircraft on it, we have to be able to fight fires if there are fires on board the ship, we have to run a nuclear power plant, so there's a lot of things that we have to do on that ship that make it a little bit different and unique but we're managing it and we're working through it," added Modly.

Based in San Diego, California, the USS Theodore Roosevelt with about 5,000 personnel onboard is presently docked at Guam, in the Philippine Sea, after having made a port visit to Da Nang, Vietnam, earlier this month.

After the visit, several cases of COVID-19 were identified among the sailors, who were subsequently transported ashore to the US Naval Hospital on the island that is a US territory and which houses several large US military bases.

US Coronavirus Death Toll May Total From 100,000 to 2.2 Million People - White House