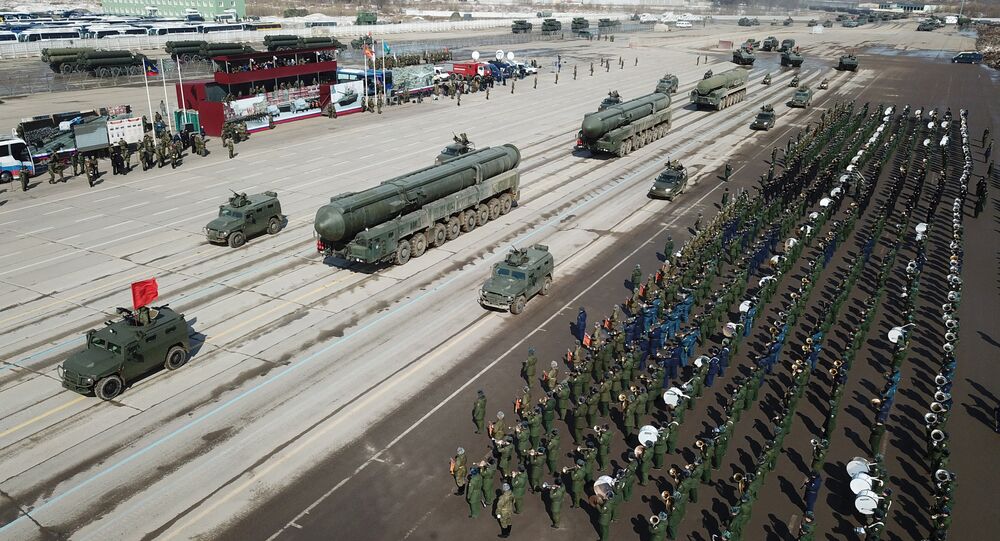 Earlier this year, the Pentagon estimated that Russia has spent some $28 billion modernizing its nuclear triad. For comparison, the United States is presently in the middle of a 30 year, $1.5 trillion programme to upgrade its own strategic capabilities.

The share of modern armaments among Russia’s strategic nuclear forces currently stands at 82 percent, and is expected to grow by 5 percent to 87 percent by the end of 2020, Defence Minister Sergei Shoigu has revealed.

“The equipping of troops with modern weapons and equipment has increased to 68.2 percent. By the end of the year, it will reach the targeted level of 70 percent. At the same time, the share of modern weaponry in the strategic nuclear forces will exceed 87 percent,” Shoigu said, speaking at a briefing to the Russian Senate on Wednesday.

The defence minister also revealed that the serviceability of all weapons and equipment in the Armed Forces’ arsenal currently stands at 94 percent.

Russian President Vladimir Putin set a target of 70 percent modern weaponry and equipment in 2012, giving the military until 2020 to reach these indicators.

Late last year, following substantial cuts in Russian defence spending, Putin revealed that Moscow could afford to make the cuts because many of the recently undertaken programmes to modernize military hardware had been completed or were nearing completion. Russia spent $48 billion on defence in 2019. For comparison, NATO spending during the same period topped over $1 trillion, with the alliance committing to spend $100 billion more in 2020.

Russia’s nuclear forces have received or are in the process of receiving a series of new weapons in recent years, including the RS-28 Sarmat intercontinental ballistic missile, the Avangard hypersonic boost-glide vehicle, and the Kinzhal air-launched hypersonic cruise missile. The maritime leg of the country’s nuclear triad has seen the deployment of the new Borei class of strategic missile submarines equipped with R-30 Bulava ballistic missiles. Russia has also upgraded its fleet of Tu-95MS ‘Bear’ and Tu-160 ‘White Swan’ bombers, increasing their range and capabilities and equipping them with new cruise missiles.

Despite these upgrades, Russia’s nuclear doctrine has remained unchanged: Moscow will not resort to preemptive nuclear attacks against any nation or bloc under any circumstances, and reserves the right to use its nuclear arsenal only as a last resort in the event of an enemy first strike, or in response to large-scale conventional aggression.