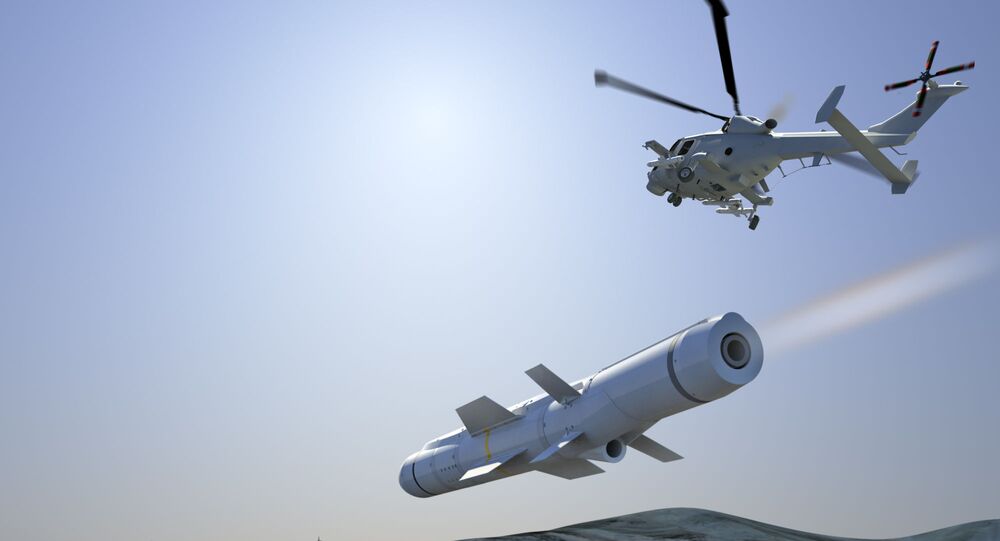 The test happened at the DGA (General Directorate for Armaments) Essais de missiles test site near Ile Du Levant off the French Riviera, and the missile was fired from a French Dauphin helicopter “close to the minimum release height, reaching its cruise phase whilst sea skimming at very low height,” a March 6 news release stated. The weapon is capable of both lock on after launch (LOAL) and lock on before launch (LOBL) guidance.

“During its terminal phase, the aircrew used images from the infrared seeker – transmitted through the datalink – to perform a successful manual aim point refinement. The missile has then followed this designated point until hitting the target with a very high degree of accuracy,” MBDA noted.

According to the company, the “high-subsonic” Sea Venom weighs 240 pounds (110 kilograms) and measures in at 8.2 feet long (2.5 meters). Defense News noted the weapon can deliver a 66-pound warhead an estimated 12 miles away, but the precise range is unknown. It is designed to hit smaller vessels, from fast in-shore attack craft to ships as large as corvettes, as well as land-based installations.

“Sea Venom/ANL is the first Anglo-French co-operation program to take full advantage of our centers of excellence, created following an Inter-Governmental Agreement ratified by both nations’ Parliaments in 2016,” MBDA CEO Éric Béranger said in the release. “MBDA is putting full effort into the successful implementation of the Sea Venom/ANL program, recognizing it should exemplify the benefits of the close cooperation UK and France are sharing in defense – enhancing both nation’s sovereign capabilities in armaments while reducing costs.”

MBDA, a consortium of missile manufacturing departments from BAE Systems, Airbus and Leonardo, is building the Sea Venom on a joint $630 million contract from the British and French governments. The missile is expected to enter service in 2021.

Jane’s noted that the Sea Venom will replace the larger Sea Skua missile, in use by the British Royal Navy since 1972, and is designed to work with the RN’s AW-159 Wildcat helicopter and the French Navy’s upcoming Guépard Light Joint Helicopter.