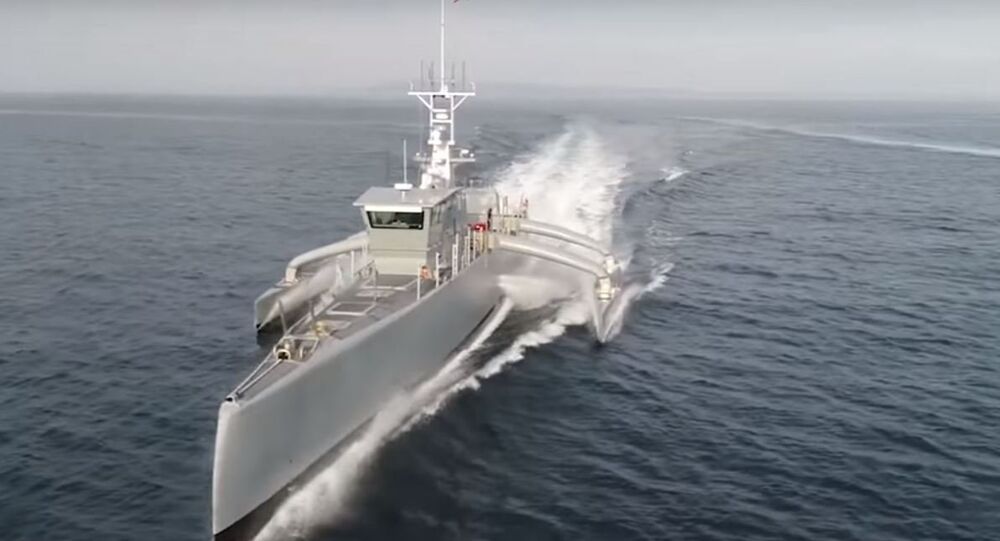 Faced With ‘Catastrophic’ Morale, US Navy Looks to Unmanned Warships to Expand Fleet

Amid difficulty attracting and keeping sailors, the US Navy has looked to unmanned ships to buttress its fleet. However, the ships will have to prove themselves capable of more mundane tasks before Congress will let them be equipped with vertical missile tubes.

The US Navy has been given the funds for the two Large Unmanned Surface Vessels (LUSVs) it asked for in 2020, but before Congress will let the Navy turn them into a weapons platform, they’re first going to have to demonstrate the drone ships can work.

The 2020 defense appropriations bill passed by Congress on December 19 allotted $209.2 million for the two LUSVs, with plans to buy eight more over the next five years in what will become known as the Future Years Defense Program (FYDP). Another $50 million are set aside for designing the ships without vertical launch tubes, which lawmakers have mandated until the platform proves itself capable of more mundane tasks.

The kind of basic operational integration the vessels will need to demonstrate is an ability to go “from point A to point B ... not hit anything, follow the rules of the road,” Rear Adm. James Kilby, commander of the Navy Surface Warfighting Development Center, said last October at an Annapolis conference.

The US Navy has released a request for proposals with the aim of awarding multiple conceptual design contracts in support of the navy’s first block of large UNMANNED SURFACE VESSELS (LUSV).
According to a USNI News report, the navy has asked for $400 million to build two LUSVs. pic.twitter.com/4PF0HWmikc

​The LUSVs will be corvette-sized warships, roughly 90 meters long and 2,000 tons’ displacement, and will derive from the lessons of various experimental drone vessels tested by the Defense Research Projects Agency (DARPA) in recent years, Sputnik previously reported. The most successful of these, the 135-ton Sea Hunter, is being more thoroughly tested by the Office of Naval Research for use in intelligence and surveillance roles.

Collectively, the Navy has referred to these unmanned warships as the “ghost fleet.”

The Trump administration’s goal of a 355-ship fleet has placed major strains not only on the Navy’s shipyards and ship-makers, but on the service’s manpower as well. Navy Secretary Thomas Modly has pledged the Navy will expand to 355 ships from its present 290 vessels by 2030, but attracting specialists to the engineering-heavy service is another question.

Vice Adm. Robert Burke, the Navy’s top personnel official, estimated in 2018 the Navy would need another 35,000 sailors to operate, support and sustain the 65 additional warships, a 25% increase over their present manpower.

As a consequence, the Navy has dramatically expanded its recruitment efforts, nearly quadrupling its recruitment budget from $26 million in 2014 to $92 million last year, Navy Times reported.

However, the service still struggles with historically low morale, making retention of servicemembers increasingly difficult. A 2014 report by Military Times ominously titled “America’s Military: A Force Adrift,” found “morale indicators on the decline in nearly every aspect of military life.”

“Troops report significantly lower overall job satisfaction, diminished respect for their superiors, and a declining interest in re-enlistment now compared to just five years ago,” the report noted. “Today's service members say they feel underpaid, under-equipped and under-appreciated, the survey data show. After 13 years of war, the all-volunteer military is entering an era fraught with uncertainty and a growing sense that the force has been left adrift.”

“It feels like a race to see which will break down first,” one sailor wrote in a 2017 command climate survey of the US 7th Fleet after two US Navy destroyers collided with civilian vessels, “the ship or it’s [sic] crew.”

Those collisions killed dozens of sailors, and the Navy’s investigations found “catastrophic morale” among the crew of both ships.

Some measures taken under the Navy’s program to reverse this trend, the Sailor 2025 initiatives, have included restoring the Torpedoman’s Mate rating on US submarines to “renew the heritage and pride” of the sailors who “man the torpedoes.” Other measures have included adding more mental health and childcare facilities, offering more extensive education opportunities, and of course, expanding reenlistment bonuses.