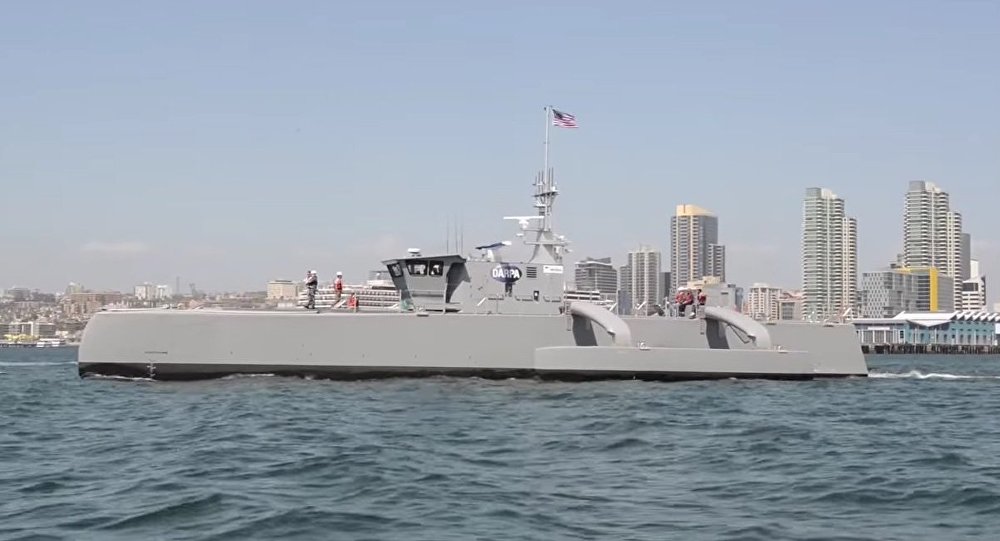 US Navy Wants a 'Ghost Fleet' of Drone Warships – Report

The drones might serve as protection for carrier strike groups or as offensive vessels in their own right, Navy officials say.

The US Navy wants to procure a number of unmanned drone warships that will operate on the open seas without any sailors, Popular Mechanics reports.

According to the report, the 90-metre, 2,000-tonne, corvette-sized vessels are designed to carry both sensors and weapons.

According to USNI News, the drone ships, which the Navy has already dubbed the Ghost Fleet, could find widespread use as an avant-garde of carrier strike groups. Due to the curvature of the Earth, warships have hard time detecting low-attitude cruise missiles that can have a range of more than 100 miles. Sending a flotilla of drones ahead of manned ships, with their sensors at full power, would significantly increase a strike group's protection, Navy officials say.

BAE Systems
US Army Seeks New Remote Weapons System, Unmanned Turrets for Ground Vehicles
The drones will eventually be equipped with vertical launching silos for missiles themselves, capable of carrying anti-air defense missiles as well as offensive cruise missiles or anti-submarine weapons, PM reports. Considering these vessels will have no sailors, the command won't hesitate to send them on missions too dangerous for a regular manned ship.

So far, the US Navy has marked $400 million in its budget for the procurement of two 300-foot corvette-class drone ships, the report says, adding that currently, the US fleet has no corvette-class ships at all. The decision comes following the successful journey of the Sea Hunter drone from the US West Coast to Hawaii. The Sea Hunter was a much smaller ship than the planned drones, being only 132 feet long and weighing 140 tons.

Navy officials compare the Ghost Fleet initiative to another Navy idea to get aerial drones operating from the decks of US carriers. The Navy flew the Northrop Grumman X-47B UAV, an attack drone that looks suspiciously similar to Northrop's B-2 Spirit bomber, off the USS Bush in 2013, and now plans to field at least eight MQ-25 Stingray aerial refueling drones by 2024.