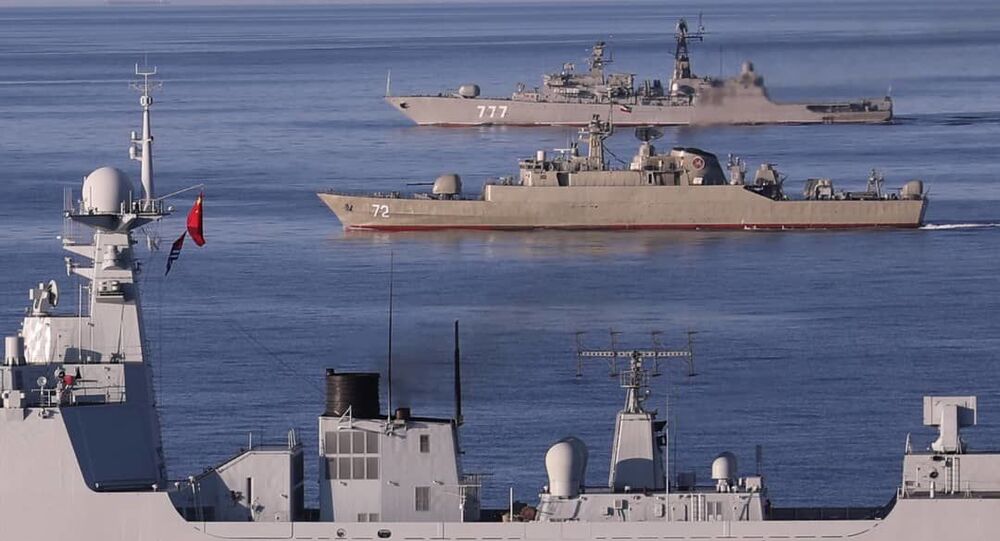 The military exercises between the three states, which took place at the end of 2019, were aimed at practicing cooperation in countering terrorism and piracy at sea.

Iranian Navy Rear Admiral Hossein Khanzadi has revealed that the US and its allies attempted to thwart joint naval war games organised by Moscow, Beijing, and Tehran between 27 and 30 December in the northern Indian Ocean and the Gulf of Oman. He added that due to an organised deception operation, they were unsuccessful in their attempts.

"During the combined naval exercise the Americans and their allies held an emergency meeting aimed at disrupting the process of the joint war game with our two allies", the admiral said.

Khanzadi said that the US only managed to monitor the Marine Security Belt military exercises using spy drones, but not foil it. The Iranian admiral further noted that the war games were meant to show that a group of regional allies is capable of ensuring security in the sector without any foreign interference or help. Khanzadi added that similar exercises will be held in future, but no earlier than March 2020.

"Our friends will be assured that maritime security can be established by the Islamic Republic of Iran and its allies and there is no need for the presence of foreign forces, particularly Americans", he said.

The admiral's comments are an apparent reference to last year's US initiative to organise a military maritime coalition under Washington's leadership to secure shipments coming though the Gulf of Oman. The idea, which met limited international support, was introduced in light of May and June 2019 attacks against oil tankers sailing through Strait of Hormuz – the only maritime exit from the Gulf.

Washington accused Iran of attacking vessels belonging to Saudi Arabia, Norway, Japan, and the UAE, while failing to present credible evidence to substantiate the claims. Tehran, in turn, denied any involvement in the two incidents, and even reported an attack on one of its tankers, but this time in the Red Sea near Saudi Arabia’s shores.