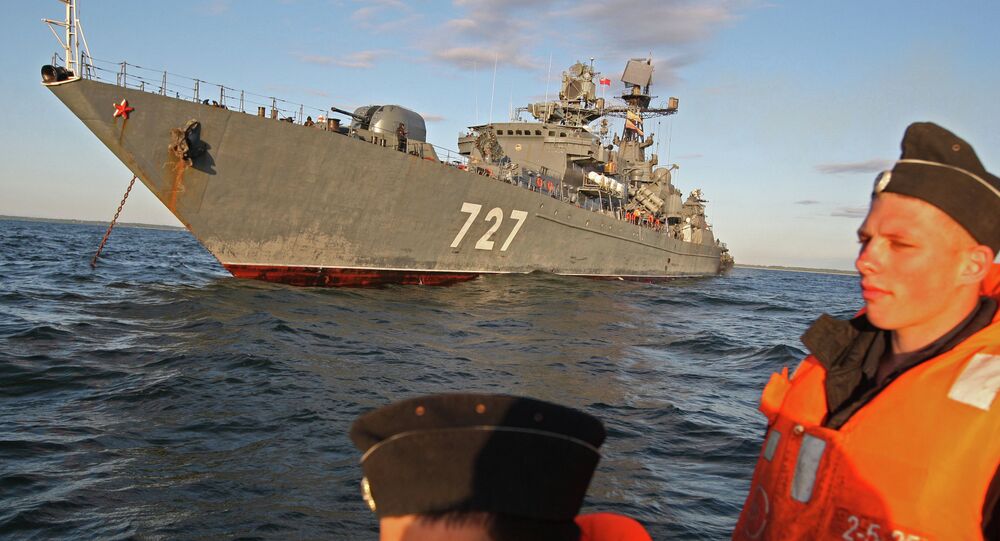 The three countries kicked off the first-of-their-kind naval exercises on Friday, with Iranian officials saying that the drills help demonstrate that Iran cannot be isolated.

Iranian Army Chief of Staff Rear Adm. Habibollah Sayyari indirectly called out the US and its allies, saying the ongoing joint Iranian-Russian-Chinese drills demonstrate that there is no need for any “illegitimate” foreign ‘maritime security mission’ in the Persian Gulf region.

Speaking at a press conference on Saturday, the commander argued that “some countries are trying to make the region insecure to justify their presence”.

“This exercise shows that there is no need for the illegitimate presence of foreigners in this region,” Sayyari said.

“Demonstrating Iran’s maritime authority in the northern Indian Ocean and presenting its experience to other nations is one of the goals of this exercise…as is the strengthening of international relations between Iran, Russia and China and the search for the path to future exercises,” Sayyari said.

The commander boasted that Iran’s Navy has been successfully transformed from a coastal navy to a strategic navy in recent years, with this fact being the reason why “powerful countries such as China and Russia are coming to our region’s waters to hold military drills.”

The commander revealed that the current tripartite drills would not be the last, and that the three countries would continue to engage in joint war games.

Cartoon shared by Iran Navy's Telegram channel amid joint naval drills with Russia and China which started today and will last until Monday pic.twitter.com/dBE9Q7JPX9

Sayyari also warned Iran’s adversaries to stay away from the areas where the drills are taking place, promising that Iran would target any spy craft spotted operating in the area. “A joint war game is no joke, and this is no joking matter for us either,” he said. The commander recalled that Iran has already “proved having such a capability in the past,” referring to the June 2019 incident over the Strait of Hormuz in which the Revolutionary Guard shot down a $220 million US reconnaissance drone using a domestically-developed anti-aircraft system.

The joint Iranian-Russian-Chinese drills, which kicked off on Friday and are set to run until Monday, include search and rescue operations, firefighting drills, defence against piracy and shooting drills.

The tripartite drills, known as the ‘Marine Security Belt’, include Iranian Navy and Revolutionary Guard naval formations, and are joined by three Russian warships and a Chinese guided-missile destroyer engaging. The drills are taking place across a 17,000 square km area of the Gulf of Oman and the northern Indian Ocean.

Ahead of the drills, the Pentagon confirmed that it was “aware” of the drills and “monitoring” them closely while working “with our partners and allies to ensure freedom of navigation and the free flow of commerce in international waterways.” On Friday, Acting US Navy Secretary Thomas Modly avoided mentioning the joint drills, but suggested that Iran would "continue to perform provocative actions" in the Gulf. He added that only a "regime change" would prompt the Islamic Republic to "stop doing what they've been doing" in the region.

As the drills kicked off, Iranian Foreign Minister Mohammad Javad Zarif reiterated Tehran’s willingness to discuss the creation of a regional maritime security coalition free of outside interference. Iran first proposed the initiative at the United Nations General Assembly in September, inviting countries like Saudi Arabia and other Gulf states to the coalition in a bid to push foreign powers like the US and Israel out of the region.

The US began putting together its own ‘Sentinel’ Gulf security coalition this summer, in the wake of growing tensions with Iran and a spate of incidents including ship seizures, suspected sabotage attacks and drone shoot-downs. The UK, Australia, Albania, Saudi Arabia, Bahrain and the UAE have joined the Us-led initiative, with Israel reportedly providing unspecified security assistance. Washington’s German and French allies opted not to participate, while Japan plans to send a small naval force to the region next month for an independent security operation approved by Iran.