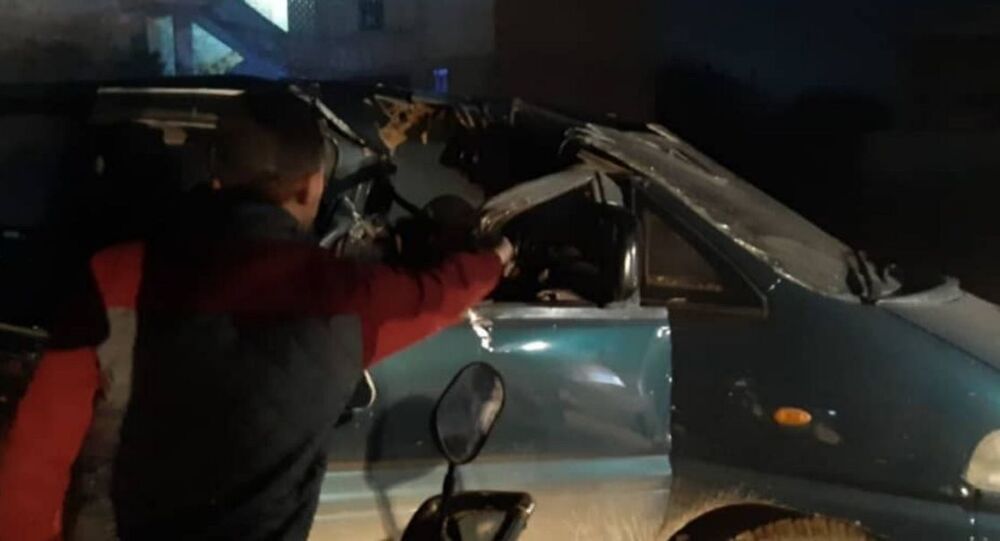 The secret "Ninja" projectile - a modified version of a US Hellfire missile, also known as the AGM-114R9X - reportedly has a non-explosive warhead designed to plunge more than 100 pounds (45 kilos) of metal through the tops of cars, buildings and other objects with maximum precision.

US forces reportedly conducted another airstrike using the "Ninja" missile in Atmeh, located in Syria’s Idlib province, some five miles from the Turkish border and less than 10 miles from Barisha, where former Daesh* number-one terrorist and leader, Abu Bakr al-Baghdadi, was killed in a raid in October.

According to The Drive media outlet, the recent strike killed at least two fighters. Their identities or affiliations to any terrorist group, however, have not been reported. The media outlet suggested, citing sources, that at least one of the dead may have been a high-profile terrorist from the Hayat Tahrir Al Sham group*.

The report concentrates on damage inflicted by the weapon. The purported footage from the site of the strike - being circulated on social media - showed the vehicle, literally torn in half at almost the very centre, displaying extensive damage to the front passenger side but otherwise limited damage to the rear seats.

The media report claimed, citing sources, that the alleged militants inside the car were "minced" by the strike - a purported combat feature said to be attributed to AGM-114R9X.

Certain similarities from Tuesday's strike reportedly overlap the attack on al-Qaeda's* deputy chief, Ahmed Hasan Abu Khayr al-Masri, in February 2017. Al-Masri was also reportedly killed while driving a car in Idlib. His vehicle also suffered more damage toward the front passenger side, with minimal damage to the rest of the car, the media outlet said.

I remember puzzling over these cuts for ages trying to work out what had hit the car of Abu Khayr al-Masri, deputy leader of Al-Qaeda.

Turns out it was a Hellfire missle with fucking swords attached to it. pic.twitter.com/aJW524c1Ph

According to the US Department of Defence, the "basic" Hellfire AGM-114 missile provides precision missile strikes against tanks, structures, bunkers and helicopters. The missile can be guided toward the objective either from an aircraft or by lasers mounted outside the aircraft. The Hellfire can be also used as an air-to-ground or air-to-air missile.

The countries where the missile has been reportedly used include Syria, Yemen, Libya, Iraq and Somali.

According to US-based media reports, citing sources, the US military began developing the missile dubbed AGM-114R9X or R9X in 2011. The R9X missile - usually around five feet (1,5 meters) in length and weighing 100 lbs (45 kilograms) - is equipped with a peculiar payload: a ring of long blades stowed inside and then deployed through the skin of the warhead seconds before impact. Western media have unanimously dubbed the new weapon a "flying Ginsu" - a reference to a Ginsu knife brand that alluded to Japanese samurai in their overly cheap and ubiquitous television marketing campaign.

© Photo : US Air Force
PHOTOS, VIDEOS Show Damage Allegedly Caused by US' Secret 'Ninja Knife Bomb'
The Central Intelligence Agency (CIA) and the Pentagon have reportedly used this particular missile only six times, including in strikes on senior terrorist leaders, though reports alleging use of the secret "Ninja" projectile have never been officially confirmed. The Wall Street Journal reported earlier, citing military pundits, that, in theory, the "Ninja" missile is so precise that it can kill someone sitting in a moving car without harming the driver. Only a very small group of military specialists know, according to reports, how to use the "flying Ginsu" properly.