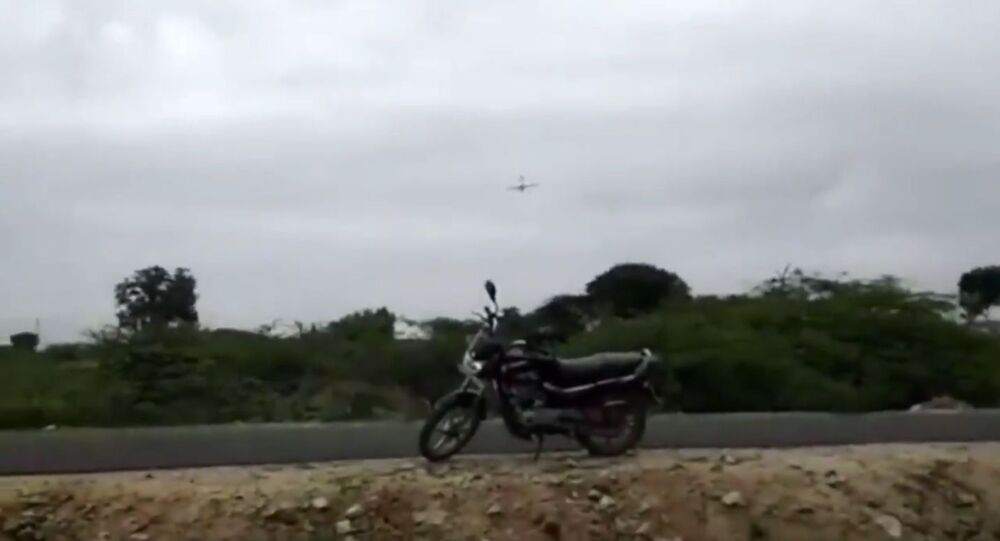 New Delhi (Sputnik): In a major setback for India’s unmanned warfare programme, the unmanned aerial vehicle Rustom-II crashed during an experimental flight trial on Tuesday in the Chitradurga district of the southern state of Karnataka.

India's Defence Research and Development Organisation (DRDO), which is developing this Medium-Altitude Long-Endurance (MALE) aircraft, said that the platform crashed while being tested in a new configuration near the testing range in Karnataka.

“Unmanned Aerial Vehicle (UAV) being developed by DRDO on experimental flight trial in new configuration has crash landed in fields near ATR Chitradurga. Data is being analysed,” DRDO said.

The accident created quite a scare in the village of Jodichillenahalli, where the Rustom II platform crashed too earth with a loud noise. Videos of the crashed Rustom-II have gone viral on the social media.

DRDO is developing the Rustom-2 as Tactical Air-Borne Platform for Surveillance-Beyond Horizon 201 (Tapas-BH 201) ). The MALE UAV will replace the Israeli Heron, which is currently in service in the armed forces.

Sources says that Rustom II will be more cost effective as it is pegged at USD 34 million per unit; Israel's Heron TP is more costly, which is problematic for the limited budget of the Indian defence ministry.

As per the defence ministry,  the flights where the unit has been equipped with a High Power Engine commenced in February 2018. Defence sources say that a total 50 trial flights have been completed since the maiden flight in November, 2016. Flight trials on airframe AF6 also commenced in January 2019 and 9 flight trials have been conducted.

TAPAS-BH, a multimission UAV capable of staying in the air for 24 hours is capable of carrying out intelligence, surveillance and reconnaissance (ISR) for India's Armed Forces. It is being designed to operate at an altitude of 9 km Above Mean Sea Level (AMSL) and is capable of carrying electronic warfare and electro-optic and synthetic aperture radar payloads. It can carry a variety of other payloads weighing up to 350 kg. Rustom-2 was to be developed within three years, based on the Rustom-1 UAV, first tested by DRDO in early 2011.