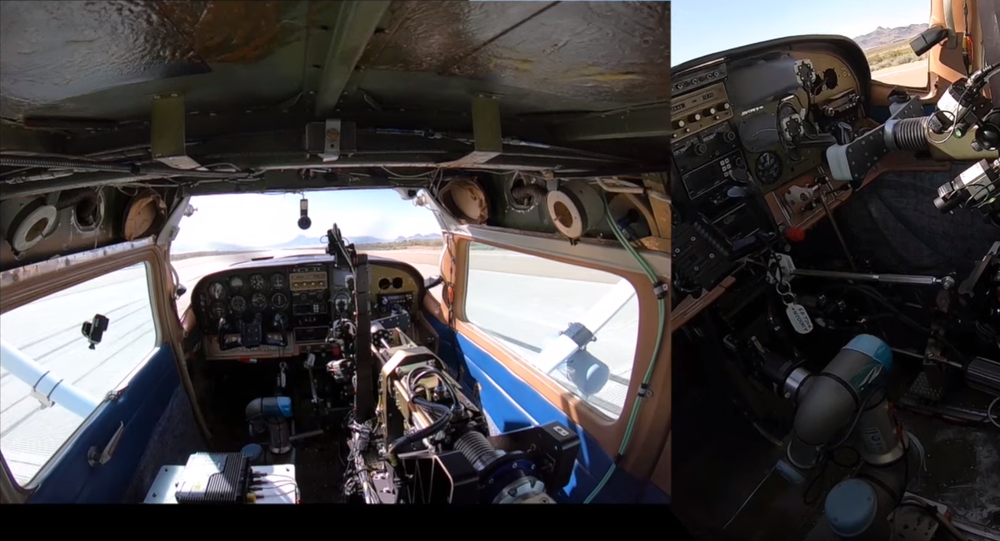 In a new development from the US Air Force (USAF), researchers recently completed a multi-hour test flight that essentially turned a Cessna 206 Stationair into an unmanned aircraft.

“Imagine being able to rapidly and affordably convert a general aviation aircraft, like a Cessna or Piper, into an unmanned aerial vehicle, having it fly a mission autonomously, and then returning it back to its original manned configuration,” Dr. Alok Das, a senior scientist with the Center for Rapid Innovation, said in an August 15 press release. “All of this is achieved without making permanent modifications to the aircraft.”

The center also noted in its statement that the aircraft-operating robot takes orders from its computer, which uses GPS-like sensors to measure its “situational awareness and information gathering”

“The system ‘grabs’ the yoke, pushes on the rudders and brakes, controls the throttle, flips the appropriate switches and reads the dashboard gauges the same way a pilot does,” researchers noted.

Douglas Birkey, executive director of the Mitchell Institute for Aerospace Studies, told the Federal News Network that the idea of redeploying older aircraft as unmanned fighter jets has been around for a long time. He also explained that many of the aircraft collecting dust in USAF storage are combat certified.

“While they may not be the type of aircraft the service would want to send into harm’s way with an airman inside, they could prove exceedingly useful when employed in an unmanned fashion, particularly when teamed to create extended kill chains that increase the survivability of exquisite manned aircraft,” Birkey and two other Mitchell Institute affiliates said in a July 2018 policy paper.

Aircraft that could possibly be equipped with the ROBOpilot tech include older models of the F-16. According to the Mitchell Institute, their vision for the future of unmanned military planes would involve a computer system that would not depend on human control like a drone, but instead be almost completely autonomous.

These new ROBOpilot developments come days the USAF’s F-15, the F-16’s more powerful twin-engine counterpart, had a number of its vulnerabilities exposed by a team of highly vetted “ethical hackers” using a combination of physical and cyber tactics.

Will Roper, the top USAF acquisition official, regarded the cyber experts’ results as a success, since the problems were discovered in-house and not by the “best hackers from adversaries such as Russia, Iran and North Korea.”