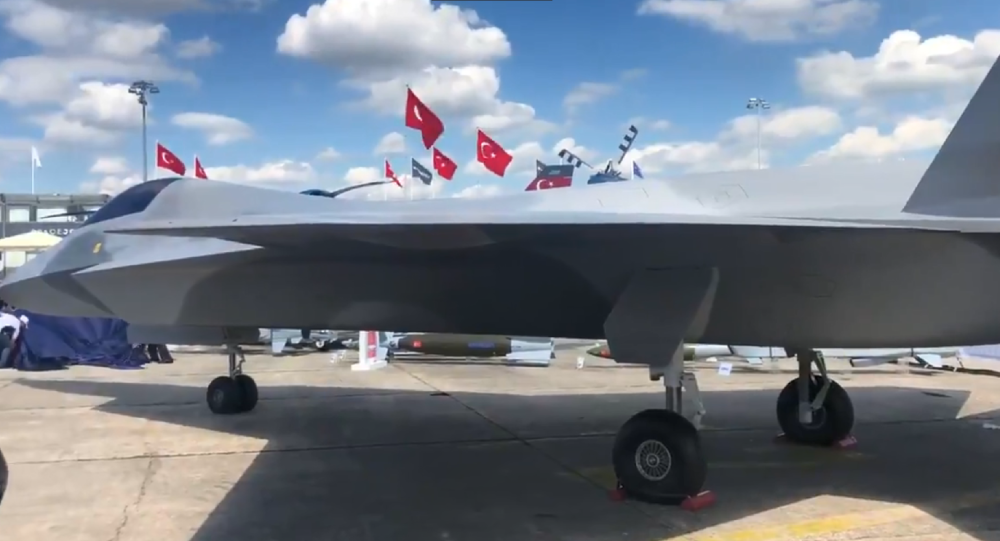 Turkey’s primary aircraft design bureau put forward at the air show Ankara’s answer to the loss of the F-35, a plane Turkey had once hoped to buy 100 of from the US. Washington recently put that deal on hold over its continued objection to Ankara’s purchasing of S-400 air defense systems from Russia.

On the tarmac at Paris-Le Bourget Airport, the dramatic unveiling showed the world a twin-engine, canted-vertical-tail fighter that looks a bit like an F-35, but with a narrower fuselage and wider wingspan, Military.com reported.

TAI’s president notes that it is one of the makers of the F-35’s center fuselage, which gives it the industrial strength to build this fighter.

This music is amazing lol. pic.twitter.com/0ZM7HMdF1U

​The resemblance should come as little surprise.

“On the F-35, actually, my company is building the center fuselage,” TAI President and CEO Temel Kotil said at the ceremony. TAI served as a secondary supplier to US-based contractor Northrop Grumman, which builds the majority of F-35 center fuselages, Defense News noted.

“So this means, in terms of manufacturing, Turkish Aerospace has enough strength to build this fighter,” Kotil said. “Our machine is a mock-up, but in 2023 there will be a real machine, and first flight is in 2025, and [it will be in] service in 2028.”

According to Defense News, the TF-X will have a top speed of Mach 2, a range of 600 miles, and will be capable of lifting 60,000 pounds upon takeoff. Its engines will provide the jet with 20,000 pounds of thrust each, making it roughly comparable to the Joint Strike Fighter, although a tad faster.

BAE Systems, which has collaborated on the program with TAI, boasted the TF-X will be “the best fighter in Europe” and capable of carrying the long-range, air-to-air Meteor missile under development by European manufacturer MBDA.

However, a Pentagon official contacted by Defense News declined to comment on whether or not the TF-X represented a firm move away from a Turkish F-35 buy, expressing hope that Ankara would come around to Washington’s way of thinking and renege on the S-400 deal. US defense leaders have voiced fears that if Turkey operates both the F-35 and S-400 together, it could reveal the F-35’s weaknesses and vulnerabilities to US adversaries, including Russia.