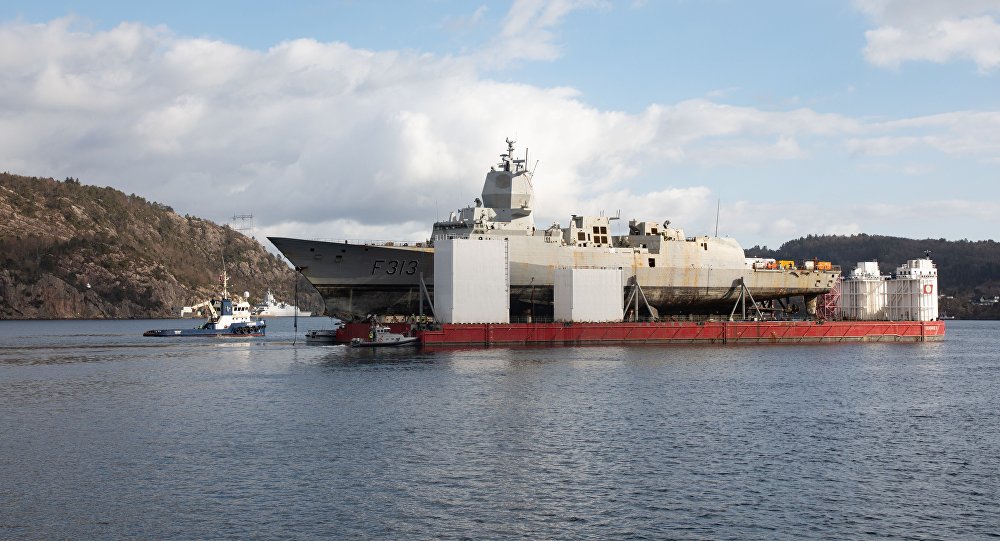 Following a fateful collision in the aftermath of NATO drills in late 2018 and after spending four months under water, the KNM Helge Ingstad is estimated to have lost half of its value. The salvaging of the frigate alone cost $85 million.

A recent annual report by the Norwegian Armed Forces features the first estimate of the expected costs of the salvaging operation to lift the KNM Helge Ingstad, which sank in November 2018 following the Trident Juncture NATO drills.

The loss of the Helge Ingstad has left Norway's defence capabilities drastically weakened, the report said. The strain on the remaining four frigates has also increased as they have to sail more frequently than usual to offset the loss.

"The accident will affect the Armed Forces' operational ability and preparedness," the report said.

After being submersed for four months in salt water, the frigate's value has been written down by NOK 2.2 billion ($260 million). This means that the KNM Helge Ingstad has lost more than half of its initial value of NOK 4.3 billion ($500 million).

Evaluations of how much of the equipment on board can be saved are underway. The Armed Forces is also considering selling the steel to cut the losses.

"It should also be considered whether parts of the frigate can be used for the remaining vessels, or whether it is possible to sell the steel", the report said.

The KNM Helge Ingstad collided with the Maltese-flagged tanker Sola TS in Hjeltefjorden in Hordaland on 8 November. The ship suffered a 45-metre-long gash in its hull on its starboard side and went down shortly thereafter.

Starting from mid-November, it was completely submerged for several months. On 4 March, it was ultimately salvaged after months of preparations and transported to the naval base of Haakonsvern.

​On 2 April, it was announced that three people were suspected in connection with the accident, the pilot on board the Sola TS, the security officer on the bridge of the frigate and an employee at the sea traffic centre at Fedje, Norway.

On 10 April, the frigate was relaunched after the gash was plugged using steel plates.