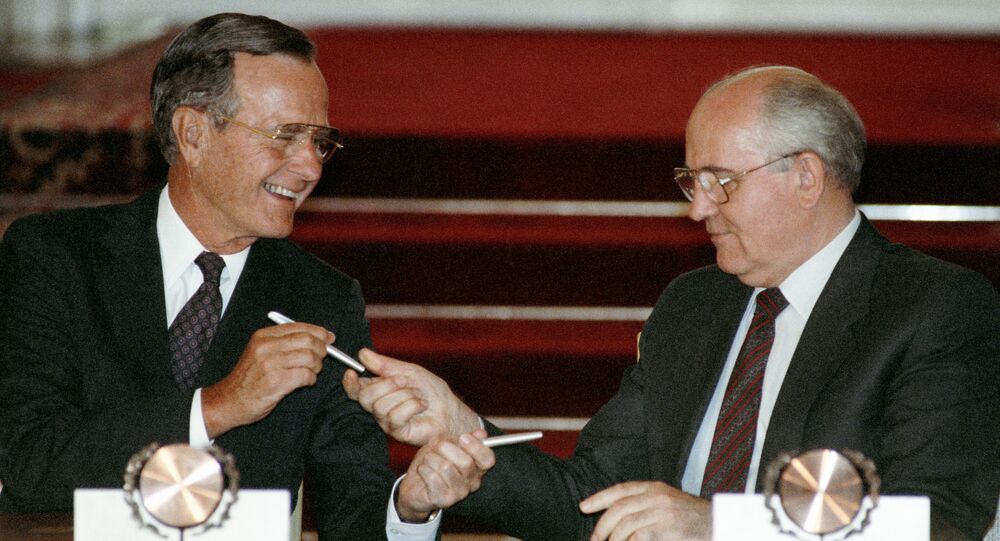 NATO began expanding into Eastern Europe in the late 1990s, despite assurances to Soviet leader Mikhail Gorbachev in 1990 that the bloc would not expand beyond the former borders of East Germany following Germany's unification. Since then, the alliance has integrated every member of the ex-Warsaw Pact, and six former Soviet and Yugoslav republics.

NATO is a 'zombie' alliance whose reason for being perished along with the demise of the Soviet bloc but been repeatedly "reanimated" using a variety of tricks, US senior former military tactician and veteran Col. (ret.) Dr. Douglas Macgregor has suggested.

In an article for The National Interest magazine, Macgregor pointed out that, despite promises by US President George H.W. Bush, British Prime Minister Margaret Thatcher, French President Francois Mitterrand and German Chancellor Helmut Kohl that the alliance would not move "one inch eastward" beyond unified Germany, the alliance went back on its word.

© AP Photo / Markus Schreiber
German Media Wary of NATO's 'Existential Crisis', Blames Trump
"Why was this important strategic commitment made by NATO's key leaders to President Gorbachev ignored? Well, in the 1990s, the Russian threat was nonexistent and there was no reason to suppose it would return," Macgregor pointed out.

Nevertheless, according to the author, "mesmerised by the prospects of being on the right side of history" and seeking campaign donations, President Bill Clinton and lawmakers in charge of US foreign and defence policy went back on their word.

"Given the voracious appetite for cash in Congress the defence industries were clearly interested in NATO expansion and found ways to advocate for it. Weapons sales to East European nations invited to join NATO promised huge profits," Macgregor recalled, pointing to defence giant Lockheed Martin's lobbying with its 'Committee to Expand NATO' in the mid-late-90s.

© AFP 2020 / Noorullah Shirzada
No Conditions Reached for NATO Pullout From Afghanistan - Stoltenberg
Then, after the 9/11 terror attacks, as "just about anything could be and was characterised as an existential threat to the American people," Russia was included, he wrote.

Before that, prior to the NATO's expansion into the Czech Republic, Hungary, and Poland in 1999, the alliance was successfully repurposed for the military intervention into the Balkans, "which is where NATO sought to extend democracy at gunpoint to Bosnia-Herzegovina and Kosovo between 1994 and 1999," Macgregor, who served as the top planner for General Wesley Clark during the Kosovo war, recalled.

Ultimately, urging President Trump to reject the nation of Georgia's bid for NATO membership, given Russian security fears in its own hemisphere, Macgregor argued that things should go further than that. "It's time for the NATO zombie to expire. Charles De Gaulle was right, 'England is an island and the United States is not in Europe,'" the observer concluded.

Tensions between Russia and NATO escalated sharply in 2014 in the wake of the US and EU-backed coup d'etat in Kiev, which led Crimea to break off from Ukraine and rejoin Russia, and saw eastern Ukraine plunged into civil war. Blaming Russia for the crisis, NATO expanded its military presence in Eastern Europe and along Russia's borders to levels unseen since the Cold War. Earlier this year, Moscow accused Washington of exacerbating tensions further with its decision to withdraw from the 1987 Intermediate-Range Nuclear Forces (INF) Treaty, a key arms limitation agreement prohibiting land-based nuclear weapons in the 500-5,500 km range.