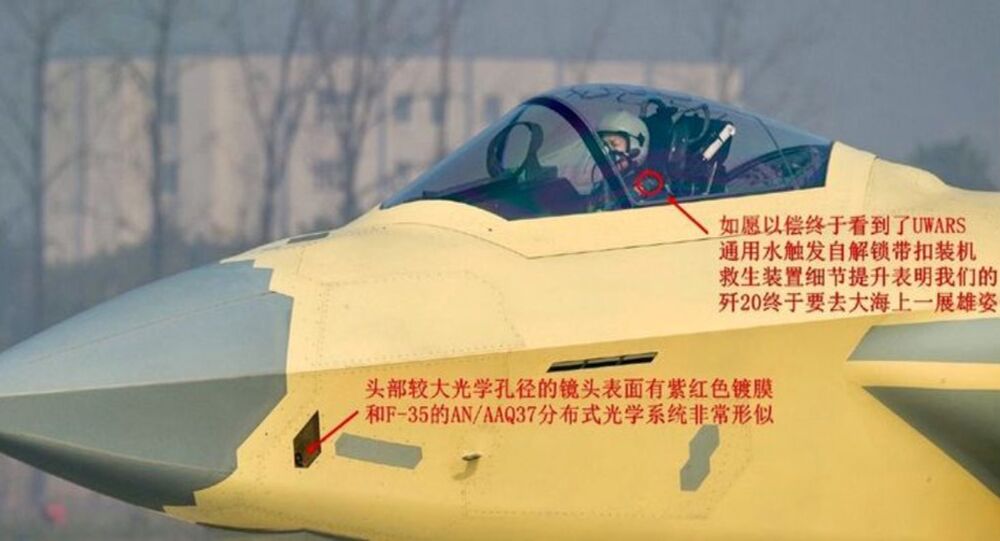 After months of complaints by the US administration that China is stealing intellectual property from companies in the United States, a picture of a Chinese fighter jet has been publicized on social media featuring key technology systems developed for the American F-35.

Critics have previously noted that the Chengdu J-20 is all but a mirror copy of Lockheed Martin's F-22, an air superiority aircraft that is no longer in production. According to a report by the Washington Times, an anonymous user recently posted new images of the J-20 on Chinese military websites showing two key technologies that have long been touted as unique features of US fighter aircraft.

One of the technologies that apparently originated in the United States was the Distributed Aperture System (DAS), which is supposed to be one of the F-35's most important sensors (the aircraft itself is often colloquially described as a flying computer). DAS has been billed by advocates as a revolutionary capability allowing a pilot to see exactly what's going on 360 degrees around the aircraft — all but eliminating blind spots.

If you've ever read a report saying that the F-35 helmet lets the pilot see through the bottom of the aircraft, that functionality is made possible by DAS, Defense News notes. If the latest images suggest anything, now the Chengdu J-20 has a comparable DAS functionality as well.

"The camera lens with a relatively large optical aperture in the nose comes with a reddish-purple plating/coasting," says the posting on the China-based Chaoji Da Benying website, as reported by the Washington Times. The post, which included four pictures of the J-20 with what looks like a fresh coat of paint, noted that "it very much resembles the F-35's AN/AAQ-3 7 DAS."

The F-35's DAS, however, has been one of the driving factors behind why the jet has a low availability rate to conduct missions, Breaking Defense reported in June 2018.

In an attempt to keep costs down on the DAS component of the F-35 project, prime F-35 contractor Lockheed Martin ditched its arrangement with Northrop Grumman — formerly the main subcontractor on the DAS component — and asked whether the rest of the defense contracting industry could do the job better and cheaper than Northrop. Raytheon became the new subcontractor for the DAS system, effectively swiping away all of Northrop's business on that part of the F-35 project.

"It's a major upset," Richard Aboulafia of the Teal Group told Breaking Defense last June, adding that "from a revenue standpoint, F-35 remains almost the only game in town."

"Major component changes like these are extremely rare, particularly at this stage of a procurement program." The reliability rate of DAS was abysmal when Northrop was the main subcontractor; Lockheed announced that shifting contract execution to Raytheon's DAS from Northrop's would make the system five times more reliable.

"The DAS win will be worth billions of dollars across the lifetime of the F-35 program. The shift in supplies is part of a broader push by Lockheed Martin to wring costs out of the program," said defense analyst Loren Thompson in comments to Breaking Defense last year.

The Washington Times report added that a second technology used by US aircraft, the Universal Water Activated Release System (UWARS), is also featured prominently on the photo of the J-20. UWARS helps automatically eject pilots from the jets if they hit seawater. "Getting our wish fulfilled… The improved details show that our J-20 is finally going to reveal its majesty on the open sea," the anonymous Chinese poster said.

It's not clear whether either of the technologies has been stolen from US government agencies or US defense contractors. US officials insist China has been stealing American technology for decades.