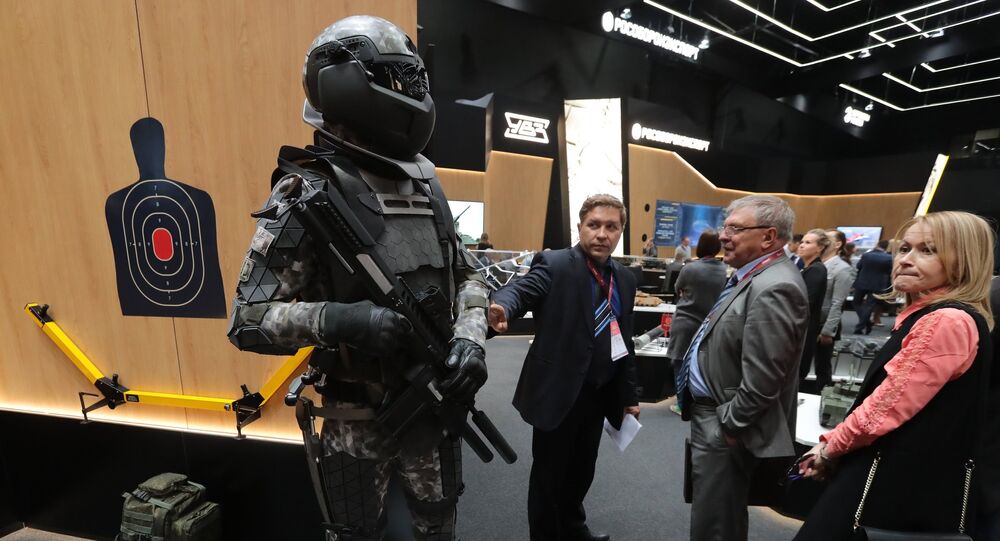 KUBINKA (Moscow Region) (Sputnik) - Chinese companies which have arrived in Russia for the annual International Military-Technical Forum Army-2018 are promising to never act against Moscow’s interests, and to instead pursue a lasting partnership in the defense sector while the West continues slapping Russia with more sanctions.

This year's forum, which kicked off at Patriot Park in the western suburbs of Moscow on Tuesday, marked the first appearance of prominent Chinese military equipment manufacturers such as the China North Industries Group Corporation, officially abbreviated as Norinco, which is one of the largest defense companies in the world.

On the first day of the forum, Chinese Ambassador to Russia Li Hui and senior Chinese military officials visited Norinco's booth, where they were introduced to the capabilities of the company's weapons systems.

"This is the first time our company takes part in this annual military forum. The reason we're here this year is because the Russian military invited Chinese defense manufactures like us to join the forum, as part of the bilateral military exchange between the two countries. That's why the Chinese government organized eight Chinese defense companies including us to come here," Ji Yongzhao, deputy marketing director of Norinco, told Sputnik.

Ji admitted that when it came to working with Russian partners, China traditionally focused on importing advanced Russian military equipment and technology.

"From Russia, we used to import a lot of their military hardware. We rarely exported anything to Russia, as our exports mostly reached Central Asian countries that used to be part of the Soviet Union. I can't reveal the details of our cooperation with our Russian partners. But we did import certain technology and products from Russia," he said.

"This year, we just want to be here first and let everyone know who we are. There could be some opportunities for cooperation in the future," he said.

China Electronics Corporation (CEC), one of the largest Chinese computer hardware and telecom equipment manufacturers, also hopes to expand its presence in the region through the forum.

"Under China's Belt and Road Initiative, we're motivated to introduce our products to different countries in neighboring regions who take part in this forum," Lv Baoli, deputy director of the systems equipment department at CEC, told Sputnik.

Lv explained that the CEC had brought complete computing systems, networking equipment, industrial control systems and aerospace components to exhibit at the forum.

The CEC representative noted that his company had a unique competitive advantage, compared to offerings from other countries, when working with potential Russian partners.

"We have not established long-term relationships with Russian clients. But we can tell our Russian partners that we can offer you a different option, which will be a long-term and stable service. As China and Russia are strategic partners today, along with our intertwined history, our partnership would be long lasting. China would not introduce sanctions or things like that," Lv said.

© Sputnik / Nikolai Zaitsev
Army-2018 Forum's Agenda Includes National Security in Arctic - Russian MoD
The Shandong-based IRay Technology Corporation, which is also taking part in the forum for the first time, said that it was benefiting from the sanctions that prohibited the West from exporting participial technology to Russia because this opened up new market opportunities for China.

"Our company offers infrared thermal imaging technology. As Russia cannot produce infrared imaging sensors domestically, it used to rely on imports from France, the United States or Israel. We have an advantage today, because such technology exports from Western countries to Russia have been restricted in recent years. As bilateral relations between China and Russia warmed in recent years, the Russian side start to prefer to import such sensors from China. There's no restriction in China about exporting our products" Frank Hu, overseas sales manager at the IRay Technology Corporation, told Sputnik.

Hu added that his company had been attending similar technology exhibitions in Russia for two years and already established business relations with local partners.

"Several of the Russian exhibitors that offer infrared imaging products at this year's forum are our clients," he said.

Aside from buyers from Russia, the most promising market for Chinese producers, the companies also hope to find clients in Moscow's partner regions — the Middle East, Africa, Asia and Latin America — which are also present at Army-2018.

Ji noted that while Norinco's existing customers came from the Middle East, Africa and Latin America, where it may face competition from Russian defense companies, it was up to a customer to make the final decision.

"It's all up to the customers' choice. Today, we face steep competition from many countries, including Russia, European countries and the United States. Although the military hardware market appears to be rather sensitive, it is still a very open and highly competitive global market," he said.