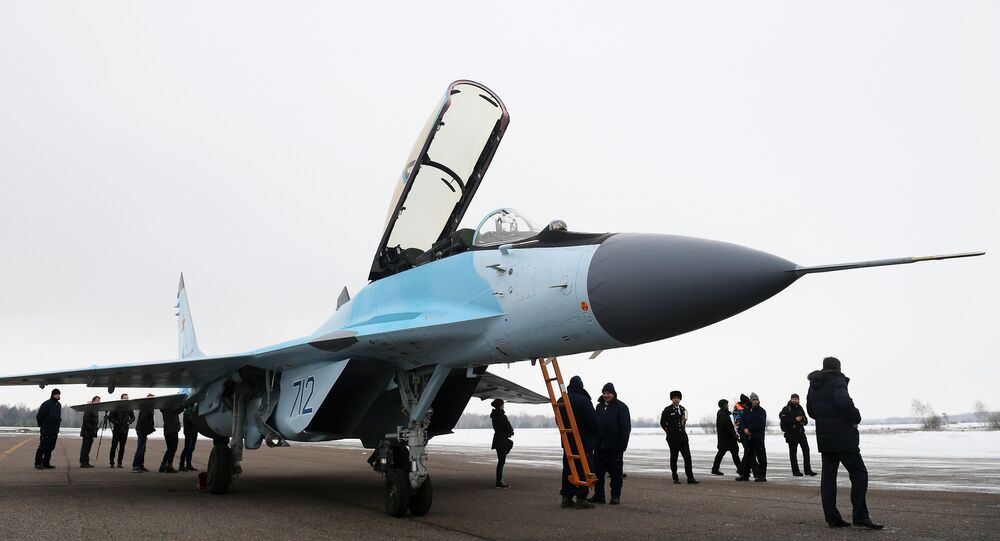 MOSCOW (Sputnik) - Russian Aerospace Forces may be able to receive deliveries of MiG-35 jets ahead of schedule in a bid for the manufacturer to keep up the rhythm and save money, the president of the United Aircraft Corporation (UAC) told Vedomosti newspaper.

"As for MiG-35, we will for the first time test the so-called model of ahead-of-schedule deliveries with the Defense Ministry. This will allow us to keep up the rhythm and lower the expenses on the aircraft manufacturing, while the Defense Ministry will be able to receive the new aircraft a little earlier than the state defense orders schedule says," Yury Slyusar was quoted as saying by Vedomosti.

According to Slyusar, the UAC is planning to deliver six MiG-35 fighters to the Russian Defense Ministry at the first stage. The first delivery will take place this year.

The MiG-35 is a multipurpose generation 4++ fighter and an advanced derivative of the original MiG-29 fighter, featuring improved combat capability and flight performance characteristics. It is capable of speeds up to 2,700 kilometers per hour (1,700 miles per hour) and has a combat radius of 1,000 kilometers.

Last year, MiG Director General Ilya Tarasenko said that that the corporation would begin mass production of MiG-35 fighter jets in the next two years following the end of testing, noting that the company was considering cooperation not only with the Russian Aerospace Forces but also with the foreign partners.