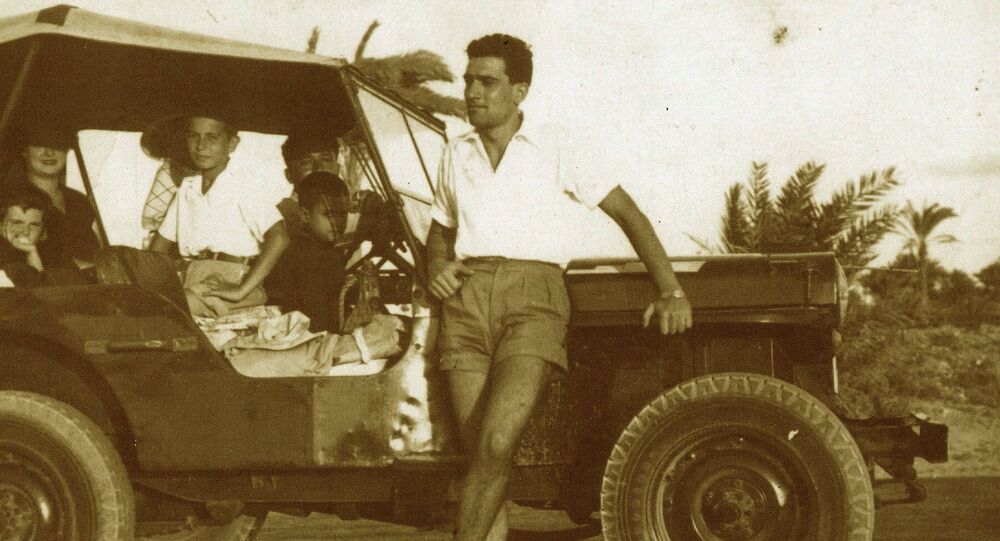 Mossad, Israel's national intelligence service, has recovered a wristwatch belonging to legendary spy Eli Cohen from Syria and returned it in a special operation, the Prime Minister's office has announced. It was not explained how the watch was retrieved from 'enemy hands', but given the agency’s history the circumstances may have been contentious.

Mossad chief Yossi Cohen (no relation) presented the watch to Cohen's family a few weeks ago at a secret ceremony marking the anniversary of his death — it is now on display at the Mossad headquarters for the next few weeks "in memory of the legendary warrior," and will be returned to the family on Rosh Hashanah. Prime Minister Benjamin Netanyahu praised the intelligence agency for their efforts.

"I commend the fighters of the Mossad for the determined and courageous operation, the sole objective of which was to return to Israel a memento from a great fighter who greatly contributed to the security of the state," he said.

Nadia Cohen, Eli's widow, told local media it was very emotional for her to have the watch back, as it was "something placed on Eli's skin". She also expressed hope his body would eventually be returned to the country — ever since his execution in 1965, his family have repeatedly attempted to have his remains moved back 'home', but Syrian officials have made clear there is uncertainty over their location. His body was moved a few days after burial specifically to prevent Mossad agents from stealing them.

Cohen was recruited to Mossad in 1960, after then-Director-General Meir Amit, looking for a special agent to infiltrate the Syrian government, came across his name while looking through the agency's files of rejected candidates, as no serving agent was suitable for the task.

Cohen was placed under surveillance for a fortnight, and judged to be an ideal candidate. After recruitment, he underwent an intensive six-month course at the agency's training school. Subsequently, he was given a false identity as a Syrian businessman, who was returning to the country after living in Argentina. To establish his cover, Cohen moved to Buenos Aries in 1961.

© CC0
Eli Cohen at his residence in Damascus

He became so integrated with Syria's ruling political and military elite that they would frequently ask him for advice on seismic issues — and his close friendship with Amin al-Hafiz resulted in him nearly becoming Deputy Minister of Defense, when al-Hafiz became Prime Minister in July 1963. There are even suggestions al-Hafiz was grooming Cohen to be his successor.

Albert Abraham Cohen
Eli Cohen with the entourage of Syrian President Amin Hafiz (1963-1966)
The period in which Cohen was harvesting sensitive information proved to be pivotal, as it was these years in which Syria — along with Egypt, Iraq, Jordan and Lebanon — was preparing for war with Israel. Moreover, on top of intelligence gathering, he conducted several active missions, his most famous being a tour of the Golan Heights with Syrian officials.

Feigning sympathy for Arab soldiers posted there who were exposed to unrelenting sunlight, Cohen urged authorities to plant at every position to afford the troops shade — in fact, the trees served as targeting markers for the Israeli military. They proved crucial during the Six-Day War, enabling Israel to capture the Golan Heights in a mere two days with relative ease.

He also made several visits to the southern frontier zone, providing photographs and sketches of Syrian positions. Along the way, Cohen learned of a secret plan by Syria to create three successive lines of bunkers and mortars, which was again crucial — the Israel Defense Forces were expecting to encounter only a single line.

Cohen's luck would run out before the war took place, however. Ahmed Su'edani, appointed Syrian Intelligence Colonel in 1964, trusted no one, was convinced a high-level mole was feeding intelligence to Israel, and disliked Cohen intensely. Cohen felt the jig was up, and told superiors he wished to terminate his mission in November that year — however, Mossad higher ups asked him to return to Syria again. He duly returned — before leaving, Cohen assured his wife the trip would be his last.

© AFP 2020 /
Picture dated 09 May 1965 shows Israeli spy Eli Cohen (L) and two other unidentified co-defendants, during their trial in Damascus, ten days before his executio
In January 1965, Syrian efforts to find Su'edani's suspected infiltrator were stepped up. Using sophisticated tracking equipment, a period of radio silence was observed in Syria in order to intercept any illegal transmissions. Large amounts of radio interference were duly detected and traced to their source — Cohen's apartment — and on January 24 he was arrested at his home, in the middle of transmitting intelligence to Tel Aviv.

After intense interrogation — during which it is alleged he was tortured — Cohen was found guilty of espionage and sentenced to death. Despite the Israeli government attempting to gather international support for clemency,the decision was upheld. On May 15 1965, Cohen wrote a final letter to his wife, begging "dear Nadia" not to spend her time "weeping about some thing already passed. Concentrate on yourself, looking forward for a better future!"

He was publicly hanged three days later in Marjeh Square, Damascus. His last wish to see a rabbi was respected by the prison authorities, and he was accompanied to the square by Nissim Andabo, the 80-year-old Chief Rabbi of Syria.

Operations involving the infiltration of other countries and theft of valuable items are nothing new for Mossad — although the targets of these actions have invariably been far more sensitive and significant than a mere timepiece.

For instance, in the 1960s, under the auspices of Operation Diamond, Israeli spies sought to acquire a Soviet-built Mikoyan-Gurevich MiG-21, then the most advanced Soviet fighter plane. Initial attempts to capture the aircraft were egregiously botched — the first was conducted in Egypt by Mossad agent Jean Thomas. He and his group were ordered to find a pilot who for US$1,000,000 would fly the plane to Israel.

© Sputnik / Dmitriy Vinogradov
A Syrian pilot checks a MiG-21 aircraft of the Syrian Air Force before a mission at the Hama airbase near the city of Hama, Syria's Hama Province. (File)
They duly identified a pilot, Adib Hanna, but he informed authorities about Thomas' interest in the MiG — the agent, along with his father and three others were arrested, and charged with espionage. The Thomases were hanged December 1962, with the remaining three receiving long prison terms. The second try, in Iraq, also failed after Mossad agents ended up brutally assaulting two pilots who refused to cooperate with them, in order to keep them quiet.

Good fortune would come the agency's way in 1964 in the form of an Iraqi-born Jew, Yusuf, who contacted Israeli diplomatic services in Tehran. His girlfriend's friend was married to Iraqi pilot Munir Redfa, a man disgruntled that his Christian roots prevented his promotion in the country's military apparatus, and was ready to leave Iraq.

A female Mossad agent befriended Redfa, persuading him to travel to Europe to meet with Israeli agents. Redfa was offered US$1 million, Israeli citizenship, and full-time employment — he accepted, on the condition his family would be also smuggled out of Iraq and come with him to Israel. Later, Redfa conducted a clandestine trip to Israel to see the airfield he would land on, and met with Israeli Air Force commander Major General Mordechai "Mottie" Hod. They discussed the dangerous flight and its path — due to Redfa's Christianity he was not trusted by his commanders, and only allowed to fly with small fuel tanks.

Numerous Mossad agents were sent to Iraq to assist the transfer of Redfa's wife Betty, their two children aged three and five, his parents and a number of other family members out of the country. Betty and the children went to Paris for what she thought was a summer vacation, — there, she was met by Mossad agents, who provided her with an Israeli passport. She was initially distressed and threatened to report the ruse to the Iraqi embassy, but eventually acquiesced. Redfa's remaining family members were taken to the Iranian border, where Kurdish guerillas helped them to cross into Iran, from where they were taken to Israel.

The opportunity for Redfa himself to defect came August 16 1966, while he was flying over northern Jordan, and diverted to Israel. His plane was tracked by radar, and Jordanian authorities contacted Syrian officials about the incursion, but they were reassured the plane belonged to the Syrian air force and was on a training mission. Instead, the pilot kept flying until he reached Israel, he was met by two Israeli Air Force Dassault Mirage IIIs, which escorted him to a landing at Hatzor. At a subsequent press conference, Redfa said that he had landed the plane on "the last drop of fuel".

© Flickr / D. Miller
The MiG-21 supersonic jet fighter
After his defection, Redfa's MiG was renumbered 007, a reference to famed fictional British spy James Bond. Within weeks the aircraft took off again with Israeli test pilot Danny Shapira at the helm, the first of many test flights. The jet's strengths and weaknesses were analyzed extensively, and it was flown against IAF fighters to train Israeli pilots to deal with the aircraft. The effectiveness of this training was demonstrated during the Six Day War, when the Israeli Air Force took down six Syrian MiG-21s without losing a single plane.

In January 1968, Israel loaned the MiG to the United States, which evaluated the jet under the HAVE DOUGHNUT program. The transfer also facilitated Israeli acquisition of the F-4 Phantom, which the US had been reluctant to sell to Israel.

Always the One You Least Suspect: Iranian Journalists Charged With Mossad Spying